I'm working on the video footage I took of the Rosary Crusade. Here's a treat from the journey back.

With the sun setting in the West, the train heading South and the darkness descending upon the East, suddenly, from the East, came this resplendent rainbow.

What a stunner! Even better on full view...

“The rainbow is a symbol of the peace and reconciliation which the blessed Virgin, our Mediatrix, effected between God and man.” ~ St Anthony of Padua

Jason and I managed to catch the 12:19 to London Victoria and as soon as we got on the train a parishioner of St Mary Magdalen named Ann stopped us and asked us to sit with her. At times Jason and I slipped into the next carriage where things were a bit quieter and Jason spent about half an hour entertaining a small baby in a pram with a fluffy bunny toy. The little baby was very giggly while Jason entertained her. Jason spent time explaining to the mother and friend that he had the night before won second prize in a singing competition at a pub on Grand Parade. I'd seen Jason the evening before the Rosary Crusade and invited him along. When he heard about it he decided he wanted to give the flowers to Our Lady. Here he is with his flowers... 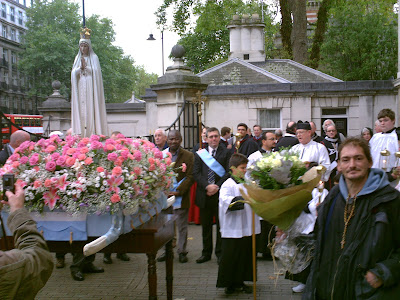 So, Jason and I, with Ann, arrived at Westminster Cathedral and upon arriving, the Lord was being exposed upon the Altar as prayers of reparation were made. The Blessed Sacrament was then processed down the aisle and around the Church. Having venerated the Lord, we went outside where the throng of crusaders were gathering for the Rosary Crusade. He, I and Ann walked praying the Rosary along the way and when we arrived at the Cathedral, Jason was able, after more prayers of reparation were made, and hymns were sung, to give Our Lady his roses. The walk itself was full of prayer and songs to Our Lady. Here is Jason and Ann on the walk. Not a great quality pic but it was in motion. 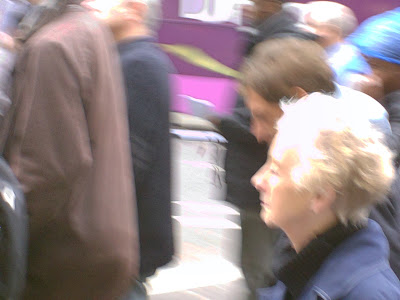 On the way back we saw the beautiful rainbow the Lord graced us with which seemed to unite the railway carriage in gasps of awe. I must say I've never seen a rainbow quite so stunning in my life. So strong, so full of colour and life. It was as if Heaven was crowning our prayerful day with a gift from above. There's some more rainbow footage at the end of the rosary crusade film for those who like rainbows. That'll be all of us, then, right?

I wish I could have been at the Crusade, but was at Aylesford that day.

On the anniversary of the Miracle of the Sun, maybe Our Lady sent that beautiful rainbow as a sign, indicating that through your prayers and sacrifices a certain group in the Church, which has misappropriated the rainbow, might soon be 'dealt with'.