Show Me Christ and I'll See the Evidence

Tom Chivers has posted on the news of a neurologist whose near death experience leaves him convinced of the reality of the afterlife.

Quite what this revelation of the afterlife means for the neurologist concerned is a matter for him.

Chivers, like one supposes the majority of atheists is sceptical. You don't, however, have to be an atheist do be sceptical of near death experiences since the Church teaches clearly that 'after death, comes judgment'. There is a difference between being 'near death' and dead.

There may be physiological or psychological reasons for why a person experiences something in a coma or when 'nearly dead' which form part of a universal human experience. Chivers, like many is equally sceptical of the Turin Shroud.

Naturally, atheists and agnostics and even those who believe seek evidence for the Divine in order to be able to believe. Where will this evidence be found? Will it really be found when a neurologist claims to have seen a beautiful woman in heavenly pink clouds offering him love and hope? Will it be found, indeed, in any singular miraculous event that convinces swathes of people that God exists?

Perhaps it will convince some that God might exist after all, but will it inspire people to pray, to want to know God? A near death experience might mean something to the one who experiences it - it could be very intense to that person, but will it leave anyone else with anything but a sense of curiosity, at best?

Our Lord made it very clear to us in the Gospels that the evidence people seek, despite what people claim, is love. God is love, St John says, and Our Lord said it is by love that His disciples would be made known to the World. It is this 'fruit' of love, this good fruit that leads others to Christ. It isn't by flashes in the pan, miracles or signs or wonders.

We see in the lives of the Saints and Blesseds this fruit of holy love. It is in the way of Blessed John Henry Newman, this 'fragrance' of Jesus that he wished to spread everywhere. We see it in the life of Blessed Teresa of Calcutta, who simply wanted to live poor and to spread this incredible love of Jesus and for Jesus to every person she encountered, especially the sick and dying. We see it, astonishingly, in the life of St Francis of Assisi, who desired to live entirely in the imitation of Christ, in His poverty, and to love with the intensity of God's love, all men and women.

It is at seemingly the most disastrous stage of Our Lord's Passion that a man is converted. St Longinus, who thrust the spear into the side of Christ is the same man who having seen the Lord die, exclaimed, 'Truly, this man was the Son of God', while others had derided Him in the seeming failure of His mission. St Longinus received the grace to recognise in God's human death, God Himself. Longinus recognises God's unfathomable love for His creatures in His outpouring of Himself, this Crucifixion of Body and Self - this supreme Sacrifice.

All people, even avowed empiricists, long for evidence of God's presence and closeness to the World. They may never think to attend a Mass. The only evidence most people will see for the existence of God is the lives of believers. In every human encounter, while we all too often forget that it is the case, we are either showing people God's love, or not. We are ambassadors for Christ, or, indeed, we are not.

Only by the holiness of our lives will men and women be convinced not only that God exists, but be attracted enough to Him to want to know Him and to follow Him. Our words can say so much, but will always fail. It is love, love that never fails.

The parable of the rich man and Lazarus, given to us by Our Lord, tells us that people will not believe, 'even if one should come back from the dead'. The one who came back from the dead, of course, is Our Lord, who was raised in Glory on the third day in the tomb. God knows that many will not believe by a miraculous event, since obviously, His Resurrection was believed by some, but not by others, then, as it is now. 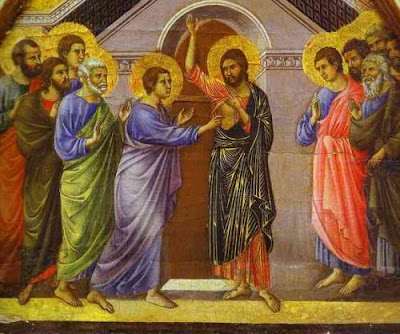 Only the lives of holy men and women make God attractive to those who do not believe. Only Saints can show those who have no intention of stepping inside a Catholic Church the beauty of God. Only Saints, by their holy lives, heroism and extraordinary love for men and women, can show people the evidence that they seek. We, who profess to believe, have to pray for the grace to be saintly.

Only this will convince many of the power of the Resurrection and of God's love for each and every human being. Of course, beautiful and prayerful liturgy will aid us in this mission as we are drawn into the mystery of God's love. It would be sad for Saints to show the World that God is beauty and love, only for men to walk into a Catholic Church where beauty, reverence and prayer were absent!

And if Tom is reading this, go easy on him. We have to love him all the more, since I believe that one of Our Lord's Apostles wanted evidence in order to believe also. He was called Thomas, too. Tom, you have a heathily sceptical patron Saint there! Well, he was sceptical for a while...doubting...for a while.

I heard a woman say a couple days ago, "I don't believe there is life after death, but I hope God will surprise me and prove me wrong."

Oh my the ignorance. "We are destined to die once, and after that, judgment."

there is so much effort to tell people in foreign lands about Jesus' teaching when millions right here at home know nothing of what awaits them.