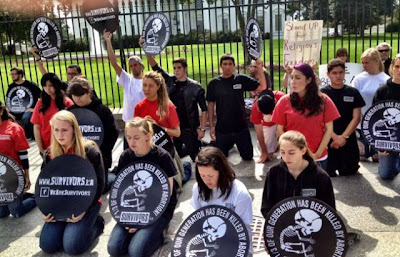 Courtesy of Life Site News
Over the weekend, 54 pro-life activists were arrested outside the White House. Their crime? Kneeling to pray.

Bryan Kemper, the founder of Stand True Pro-life Outreach, told LifeSiteNews.com (LSN) that dozens of activists were breaking an ordinance that bans protesters from remaining stationary - allowing them to carry signs in front of the White House, but not to kneel in prayer - to draw attention to the Obama administration’s assault on religious liberty through the HHS mandate.

The event’s organizer Rev. Pat Mahoney, director of the Christian Defense Coalition, told LSN, “In the HHS mandate, we see the greatest assault on religious freedom the history of our nation…We sensed there had to be a response from the church.”

The arrests, which are scheduled to continue Tuesday at noon, were the first part of a strategy “to send a clear message to President Obama and our elected officials that we can never comply with an unjust or immoral government mandate, which forces us to violate our core convictions, and we would rather to go jail before we comply. We will not comply.”