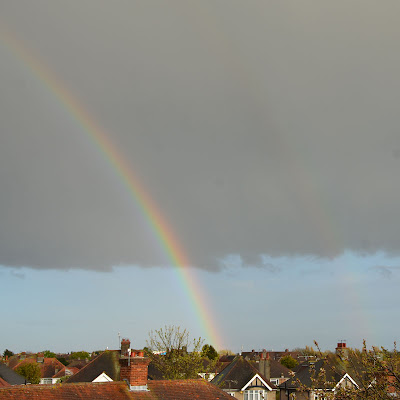 To some people, the rainbow is an optical and meteorological phenomenon that is caused by reflection of light in water droplets in the Earth's atmosphere, resulting in a spectrum of light appearing in the sky. It takes the form of a multicoloured arc. Thanks, Wikipedia!

To some, the rainbow is a singular sign of God's grace, peace and mercy to men as well as a vision of hope.
The first group understand what a rainbow is and why it is there in a restrictive sense. Light travels through water droplets making a colourful arc, etc. etc...yawn...
The second group understand what a rainbow is and why it is there. While appreciating the scientific knowledge of rainbow formation, these believe that God made the rainbow to look beautiful. It is. It glorifies Him and causes men to praise the Creator. The first group think the second group is nuts. The second group think the first are sad. But both groups say, 'Oh look, what a beautiful rainbow!' Both groups acknowledge the rainbow's existence and its beauty, while one group acknowledges its Creator.
So, we have a universal appreciation for beauty. Find me a man who says, 'Rainbows! I can't stand rainbows! I detest the rainbow! In France, do they say, 'Je detest l'arc-en-ciel!'? If there is something universally beautiful, then not only is there something the religious and non-religious can agree on, at last, but we have found that such a thing called beauty objectively exists or is. It isn't just 'in the eye of the beholder'. It's what St Thomas Aquinas would call some kind of a law, I guess. Second, we see that therefore objectivity exists too. Some appreciation for beauty which is universal hardwired into our being. Nobody detests rainbows. Everybody loves rainbows. Therefore it is a universally accepted 'beautiful thing', objectively speaking.
But here's the thing. Does the rainbow actually exist? If it is light passing through water in a fashion that creates multiple colour, two people looking at it can see it. Yes, you can see it, but can you touch it? Is it an actual thing of substance? What you see, I mean? Can I catch it? Can I slide down it? Can I take it home? Can I track it down? If you are in an airplane can you pass through it? As Karen Carpenter sang, I guess that there's 'no getting over' it. It only exists, perhaps because we see it. It only exists because we are and we are here on Earth. It's not like a tree, or a flower, or even like the sky which is always there.

All can see it, but it is merely light passing through water that creates an effect, an illusion - yet it does not deceive. It does not exist substantively, yet, it does exist because for a while it is. We see that it exists not substantively because it fades and quite fast. Or does the rainbow exist at all? What exists, what is testable, is light and water.  The rainbow, perhaps, does not exist objectively, as other things do, though you and I and the Lord above may all see it. It is not a 'thing'. It exists only by sight! The sun definitely exists, so does water and rain, but the rainbow? We're talking a different catergory here in terms of 'Creation'. This is merely the show of light passing through water. It is an effect as a result of a cause - light reflecting through water droplets in the atmosphere. It has no substance.
So, now we see that not only does beauty exist, as an objective reality, in itself, discernible by all men, but that all men believe in something that does not actually objectively exist and for which they have no scientific evidence, since the effect of colours generated by light reflecting in water is just something seen by eyewitnesses. Should we believe them, when men talk of rainbows? The blind man has never seen one. Why should he believe? Could it be that the World has been lying of it? To the blind man, could it be a myth? A sky fairy story? For us, too, is this real? Substantively, empirically real? Or is it just an optical illusion? The colours appear to exist, but they do not exist. What is colour? They merely appear. These colours have no substance whatsoever, neither can you run tests on the colour. Yet the hardest empiricists maintain that rainbows not only exist, but are beautiful too!
Well, we religious types have no problem with that. We acknowledge the rainbow anyway and praise God for it. And we acknowledge that the same Lord that made the rainbow to give glory to Him and cheer to men not only exists, though 'empirical evidence' is wanting, but He is Beauty Itself! To the atheist, of course, no amount of evidence is enough. Those who believe, however, could say, and rightly so, 'Behold! The rainbow!'

I know what you're thinking. You're thinking, 'Rainbows leave me cold. I'm bored of them now. First time I saw one was good. Second, sure....By the thousandth rainbow, well, I got tired of rainbows. They're a bit like London, really.' Well, that's my argument blown then...but have you ever noticed that the Lord doesn't send them every day, or even every week, or even every month? Maybe the rainbow is always there and just appears at the moments when the atmosphere is 'just right' in terms of light and water?

How many eyewitnesses were there recorded in the Gospel to the Resurrection, again? Many of these eyewitnesses died for their belief. I forget how many...

We see, then, that when we look upon the Rainbow, that we look upon something that appears to us to exist, but, substantively, does not. It appears as a sign illuminated by a mixture of light and water in the sky. Yet, few can deny, none can deny that the rainbow IS, at least while it appears to men.

It IS a rainbow. Yet, we see that to believe it requires a certain amount of faith, since we've no data on the substance of colour or 'God's palette'. Light and water exist, but the rainbow appears intermittently as a sign in the sky. All believe it is a rainbow because that is what we see, but there is no empirical evidence of it save the views of eyewitnesses down the ages and at present and in ages to come.

The gift of faith has led men to see God in everything and everyone. They have no need of evidence and the testimony of the Apostles leaves them believing in the Resurrection to which they attested. Faith is nourished by prayer and the sacraments.

The rainbow is not present in the sky by faith, even though scientists cannot pin it down and examine it and test it. Yet it is by faith that we recognise the rainbow to be what it is. Jesus is not present in the Holy Eucharist by faith, but it may require faith for us to believe it is the Lord. Like the rainbow the Lord appears to us and disappears from sight, into our souls, feeding us with His Body, Soul, Humanity and Divinity. Men of great faith have exclaimed upon seeing the Holy Eucharist, 'Dominus est! It is the Lord!' as quickly as they have pointed out a rainbow to a friend. I ask you, who are the 'empiricists' to tell them they are wrong, especially when scientists have probed the heart tissue of the Lord in labs in the wake of a Eucharistic miracle like that of Laciano.

'I thought we were expected to believe in Him on faith alone. If He's now doling out evidence, why is He only doing it for a few coma patients and heart-attack victims? Why not simply write "Heaven is real and I exist" in light-year-long golden letters across the night sky? It's not as though the advance viewing of heaven can have been an administrative mistake ("Oh, sorry – I've got you down for July 2038. Choking on pick-'n'-mix at the Holloway Odeon. Back down you go"); God is, after all, omniscient, and presumably therefore beyond our earthly Outlook Calendar foul-ups.'

Lovely post Laurence. No I am never bored seeing another rainbow - I saw one three or four days ago here in Brighton from the window of a bus and a few seconds later it was gone. Just a fleeting glimpse.

One of my most memorable experiences in Lourdes was the appearance of a rainbow.

There had been a massive thunderstorm during the torchlight procession one night. The thunder reverberated round the mountains, the lightning lit up the sky and the rain poured down as soaked to the skin we splashed our way round the processional way.

When we arrived in front of the Basilica and started singing the Salve Regina, for some reason I felt the need to turn round - I suppose I was curious to see the crowds behind me. The rain suddenly stopped and there perfectly framing the large crowned statue of Our Lady was a superb rainbow. I had no camera with me to record this natural phenomenon but I shall remember this scene for ever.
I stood transfixed, a lump in my throat, while the Salve Regina soared up into the heavens.

Thank you for linking to the Eucharistic miracle. Extraordinary - I wonder why it is not more well known. Have you seen the video on the Eucharistic Miracle which took place one year during the Consecration at Mass in Lourdes? The Mass was celebrated by two Cardinals both now dead - Lustiger and Bille - and if I remember rightly the Mass was broadcast on tv. It is quite extraordinary to watch.... But as you say we don't need miracles to believe.