Watch 'The Mission' on Gloria 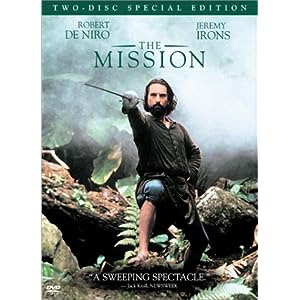 'The Mission is based on true events surrounding the Treaty of Madrid in 1750, in which Spain ceded part of Jesuit Paraguay (a mission territory) to Portugal.

The film's narrator, "Altamirano", speaking in hindsight in 1758, corresponds to the actual Andalusian Jesuit Father Luis Altamirano, who was sent by Jesuit Superior General Ignacio Visconti to Paraguay in 1752 to transfer territory from Spain to Portugal. He oversaw the transfer of seven missions south and east of the Río Uruguay, that had been settled by indigenous Guaranis and Jesuits in the 17th century. As compensation, Spain promised each mission 4,000 pesos, or fewer than 1 peso for each of the circa 30,000 Guaranis of the seven missions, while the cultivated lands, livestock, and buildings all built created by the natives in conjunction with the Jesuits were estimated to be worth 7-16 million pesos. The film's climax is the Guarani War of 1754-1756, during which historical Guaranis defended their homes against Spanish-Portuguese forces implementing the Treaty of Madrid. For the film, a re-creation was made of one of the seven missions, the large São Miguel das Missões.

Father Gabriel's character is loosely based on the life of Paraguayan Saint and Jesuit father, St Roque González de Santa Cruz. The waterfall setting of the film suggests the combination of these events with the story of older missions, founded between 1610-1630 on the Paranapanema River above the Guaíra Falls, from which Paulista slave raids forced Guaranis and Jesuits to flee in 1631. The battle at the end of the film evokes the eight-day Battle of Mbororé in 1641, a battle fought on land as well as in boats on rivers, in which the Jesuit-organized, firearm-equipped Guarani forces stopped the Paulista raiders.'

It is a really good movie. It both gave me hope and depressed me the first time I saw it.

The only caveat is the National Geographic style nudity amongst the natives. It doesn't play a major part in the story, but it is something to be aware of.

Good movie. I was impressed with the faith of the priest at the end as he led the Eucharistic procession. Powerful stuff.