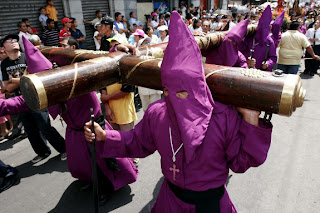 Brent Council has apparently refused the go-ahead of the Way of the Cross Walk, this year, organised by several Churches in Willesden, London. It has been noted by not just one but two bloggers that the Council appear somewhat more relaxed about Hindu or Muslims publicly expressing their faith. It is a strange decision. It's not like the walk will involve perfectly liturgically and penitentially apt purple hoods that will scare the children of Willesden.

You'll be surprised, then, to learn that this year, Brighton and Hove City Council have given the go-ahead for a whole Passion Play to take place around Brighton and finally 'it is finished' on The Level, a green near the London Road.

I was surprised that the Council in Brighton leant their name and support to it. I'm more surprised that Pope Benedict XVI's warning to the United Kingdom not to push religious expression out of the public square has not been heeded by Brent, where the community is so diverse in terms of religious affiliation.

On a more general level, however, it has to be said that secular authorities will fear Christ greatly, since He is the one, the only One, Who can liberate men and women's hearts from the tyranny of sin as we enter into relationship with Him. That is why the Catholic Priest at St Mary Magdalen's,Willesden, is right to ask whether a Pride march would have received such a strict review.  Still more than that, however, what losses there would be for so many authorities in the United Kingdom, were countless men and women to live for Christ. Abortion clinics would record record losses, unprecedented since the 1960s. Authorities would fear religious sentiment and stop acting as the campaigning arm of Stonewall.  Whole agendas which are embedded in public life would have to be reassessed in the reawakening of public consciousness of Christ as 'the Way, the Truth and the Life'.

In that sense, and in that sense only, can we speak of Our Lord as a 'revolutionary'. The revolution is God's. It is God's revolution, in the words of Pope Benedict XVI, that takes place in men and women's hearts. 'My Kingdom is not of this World,' said Our Blessed Lord. Still, we pray, 'Thy kingdom come'. There is a very real sense that to 'powers, principalities and dominions', Catholicism, and to an extent other mainstream Christian churches, is still a great threat to authorities, because at the heart of the Christian Faith is an upturning of the values of the World. It is counter-cultural, the Cross stands as a Sign of Contradition to the World. The public witness of believers too, stands in opposition to the values of the World.

In order to be considered a real 'heretic' in modern Britain, one really has to be a faithful Catholic who rejects the dogmas of modern society. Perhaps, even within the 21st century Church Herself, a similar level of scorn is afforded to those who are loyal to the Pope and to the Magisterium. The tables have, in that way, been turned from the times when the Church was strong. Isn't it ironic that society now apes the very 'close-mindedness' or 'dogmatic' stances of which the Church was accused not too many centuries ago? Yes, there are many authorities, powers and dominions who wish the message of Good Friday to be suppressed. Many would have much to lose from the conversion of England, for which we steadfastly pray. Those who follow Christ, who take up their Cross and follow Him along Calvary are considered 'rad, trad and dangerous to know'. Perhaps, in a modern Britain so dissatisfied with those things that so often bring us pain, anxiety and despair, that is why membership of the Bride of Christ could yet become more and more appealing.
at April 15, 2011

Seems a good one to support. Rather more appealing than the Hove parish that's having a donkey on Palm Sunday. I hope the animal doesn't disgrace itself.