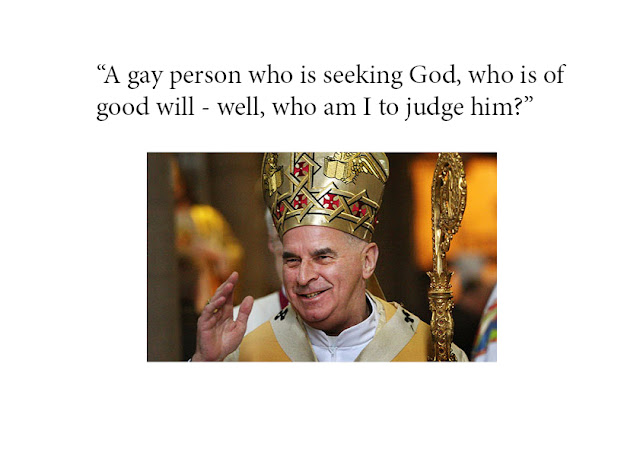 Okay, I'm just going to put this 'out there'. As someone who has committed the particular sin and who carries the cross of homosexuality, I am pleased that the Holy Father is 'reaching out' to homosexuals, as the media puts it and, as someone who has sinned so greatly against Heaven, I too would say of another, 'Who am I to judge?' But does that mean I cannot tell someone the truths of the Church's teaching on homosexuality or explain it?

I know we are all sinners in need of God's mercy. I agree very much with the sentiments of the Holy Father that the Church should not 'marginalize' persons with a same-sex attraction. The Church wants to gather her chicks to Her breast, as Christ said as He lamented over Jerusalem. I do wish His Holiness had not decided to adopt the secular usage of the word 'gay' since this word has been stolen. Even if it is the language of the man on the street or even the lay Catholic in explaining Catholic teaching, it is, I think, a little unbecoming of a Pope.

I know that priests are human like all of us are human and, being priests, their weaknesses are even more targeted by the Devil than our own, since the Devil wants most to strike the Shepherd, so that the flock may scatter.

I know that His Holiness talked of the 'sins of youth' in reference to Mgr Ricca and that Cardinal Keith O'Brien's admission suggested that his lifestyle had been something long-term and persistent.

I'm just wondering when the Church authorities can, would or should make a judgment call on someone's suitability to the Priesthood. It seems to me that 'Who am I to judge?' as an attitude must have been one factor in the huge amount of time it took for Cardinal Keith O'Brien to 'come clean'. By the time he did, because he'd been 'told on', the Catholic Church in Scotland was sent into disarray.

The gentleness and compassion of Pope Francis is indeed most endearing and wonderful. He gives the impression that His Holiness is tender-hearted and merciful. That said, if nobody - nobody -  makes a judgment call on a gay man's suitability in the Priesthood at any point in his career then the Church suffers greatly later on.

When a priest acts on his homosexuality it causes great problems not least for the priest's spiritual life, but also he can become a target for blackmail. It also means that when he, as a priest does what a priest needs to do - preach the Church's teaching on homosexuality - he becomes vulnerable to being 'taken down' should anything come to light. It undermines both faith and belief - it undermines the credibility of the Church and of the priesthood and opens the man who teaches the Truth about human sexuality to charges of hypocrisy.

A gay man, as a Catholic, may fall and fall again, but this cannot be the way with the seminarian or the priest - not if he is serious about upcoming or already taken vows. Who is to say that any priest or seminarian is not a person of 'good will' or 'seeking God' - only God actually knows what is 'in a man'. This language is - in the current state of play in the Catholic Church - a little vague. Unless seminaries have ultra-holy rectors who can see into men's souls exactly how, in the light of the Supreme Pontiff's comments, is he to know whether a candidate is suitable for the Sacred Priesthood?

Perhaps I am making a mountain out of a molehill as we bloggers sometimes do. As far as I know there is no 'total outright ban' on homosexual clergy - just the seeking of reassurances that active homosexuality is something that the candidate has substantially and honestly left behind - just as a heterosexual hopefully isn't out womanising his local district in the run up to his entrance into the seminary or ordination. The Church, I believe, looks for candidates with a spiritual maturity that means that the candidate not only believes what the Church teaches concerning the condition of homosexuality, but who is not, or no longer is, mastered by his inclination.

I cannot say what I think of a Pope who does not want to judge a sinful priest no matter what sin. This is a false charity.
II. Chastisement of the Sinful Priest.
But let us now see the chastisement that awaits the sinful priest a chastisement proportioned to the grievousness of his sin. According to the measure of the sin shall the measure also of the stripes be. 4 St. John Chrysostom gives up as lost the priest that commits a single mortal sin after his elevation to the priesthood. 5 Terrible in deed are the threats that the Lord has pronounced, by the mouth of Jeremias, against priests who fall into sin. For the prophet and the priest are defiled, and in my house I have found their wickedness, saith the Lord. Therefore, their way shall be as the slippery way in the dark ; for they err and fall therein! 6
What hope of life would you give to him who, without light to guide his steps, should walk on a slippery way along the brink of a precipice, and who should from time to time be violently assailed by enemies endeavoring to cast him down the precipice ? This is the miserable state into which a priest who commits mortal sin has 27 brought himself. The slippery way in the dark. By sin the priest loses light and becomes blind. It had been better for them not to have known the way of justice , than after they had known it, to turn back. 1 How much better would it be for the priest that falls into sin to have been a poor uninstructed peasant, who had never known the law! For, after so much knowledge learned from books, from sermons, from directors, and after so many illuminations received from God, the miserable man, by yielding to sin and trampling under foot all the graces that God had bestowed upon him, shall make all the lights received serve to increase his blindness, and to keep him in the state of perdition. " Greater knowledge is followed by greater punishment," says St. John Chrysostom. 2 And the saint adds: " The sin to which the priest consents may be committed by many seculars, but his chastisement shall be far more severe, because his blindness shall be far greater than theirs." -He shall receive the punishment threatened by the Prophet: That seeing they may not see, and hearing may not understand 3"And this," says the same St. John Chrysostom, "we know from experience that a secular after committing sin is easily induced to do penance." 4.

"Who am I to Judge" asks the Pope.

The confessional is a place of judgement, We accuse ourselves of our sins and the priest acts as judge (granting or withholding absolution; imposing a penance).

As a priest (which of course the Pope is) I find the question he asked very perplexing.

As for the Pope's contention that Almighty God "Forgets" sin: This seems to be NOT in accordance with the Church's teaching; we believe Purgatory is the place where we are punished (pay the debt) for sins WHICH HAVE BEEN FORGIVEN. The catechism makes this very clear.

Therefore if God "forgets" our sins what is the point of Purgatory.

And if God "Forgets" our sins why is Original Sin passed-on from one generation to the next?

I fail to understand His Holiness's press release on this subject. Might he have been misquoted? Or has he made a mistake?

What you say is fair nough, but the same applies to heterosexual clergy. I know of a few who hav fallen in this respect. You metion Cardinal O'Brien, who actually was a great bishop, but what can be said of him applies also to the former bishop of Argyle and the Islands who beetled off with a lady friend.If I may quote from the thread on which we both commented on Facebook: "every sign of unjust discrimination should be avoided. "They must be accepted with respect, compassion and sensitivity." CCC2358 Pope Benedict said the same. The media have interpreted this as a change which it is not. It might be better to emphasise chastity fro all clergy. That would be more equitable, Lawrence.

It is a difficult one this. In the specific case of Mgr Ricca the Pope has said that in the investigation required by Canon Law there was no evidence of what Sandro Magister has alleged. However Magister further alleges that the record has been tampered with so perhaps the Pope needs to take another look.

However what he is accused of did take place some 13 years ago so does one still think that this disqualifies him from an office if he has sincerely repented? His Holiness gives us the example of St Peter and what about St Augustine becoming Archbishop of Milan?

What I find perhaps more concerning is the allegation that he lodged his friend in the Nunciature and arranged for him to receive a salary. Should that financial irregularity be true is he the best person to clean up the Vatican bank?

I think one of the problems is that whilst someone can be forgiven for their past sins the world at large is not quite so generous and this can undermine the credibility of whatever is being done about the Vatican Bank.

The word 'gay' was stolen a long time ago and not, in earlier ages, by homosexuals. Why do you persist in this 'stolen' nonsense? Language isn't static. After all Auberon Waugh, to be amusing, used to refer to homosexuals as homosexualists. Fr Z, who is never amusing, uses homosexualist differently. Language evolves.

I just LOVE Queen! Thank you for the music...for giveing it to me. (I love Abba too)