Update on the Francisan Friars of the Immaculate 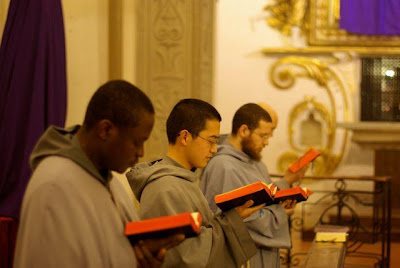 'It was reported in the Catholic online press today that our religious community, the Franciscan Friars of the Immaculate, has been assigned an Apostolic Commissioner by the Sacred Congregation for Institutes of Consecrated life.  Pope Francis has ordered the decree which goes into effect on August 12.
Pope Francis has also severely restricted our use of the Extraordinary Form of the Mass, and this has been reported by a major italian journalist as a “contradiction” of Pope Benedict’s permission granted in the motu proprio Summorum Pontificum.

This is an unfortunate instance of an overeager journalist sensationalizing something he can only speculate about. The restrictions on our community are specific to us and have been put in place for reasons specific to us.  Pope Francis has not contradicted Pope Benedict.  The visitation of our community began under Pope Benedict and the Commission was recommended by Cardinal João Braz de Aviz who was appointed to the Congregation by Pope Benedict.

What is being reported in the press and what has actually transpired within our community over the course of a number of years are two different things. Many of us - I would hope most of us - Franciscan Friars of the Immaculate, welcome the Holy Father’s intervention into our life and trust fully that Holy Mother Church knows exactly what she is doing, even when the journalists do not.  We entrust ourselves to her care, just as we do to the Immaculate.'

Please pray for our Institute.


This is very consoling, apart from the fact that the decision came down against those in the community who are devoted to the Traditional Latin Mass. Why is an internal dispute settled by a decisive move against the Mass of Ages by the Pope? I still fail to see how this is not in contradiction to Summorum Pontificum, since a number in the community desire Mass in the Extraordinary Form.

Now let us consider the not so consoling. The implications are that the Supreme Legislator of the Catholic Church can and possibly will move against other communities should circumstances warrant it. What does this mean? A letter or two from parishioners of a Church? A letter from the Diocesan Bishop? 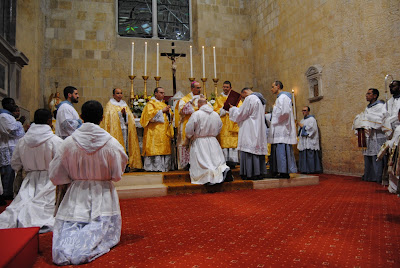 Let's be realistic here. How many Bishops who feared moving against Priests celebrating the Traditional Latin Mass before will see news of this tragedy and be emboldened?

I will be honest in saying that when I spent time with the Franciscans of the Immaculate on the Pilgrimage to Walsingham two years ago the two inspiring Friars present made it clear how devoted to the Latin Mass they are and the important element it played in their spiritual life. This Franciscan Order's new vocations thrive on the Latin Mass - its part of the reason young men join the Order. They are attracted by the beauty of the traditional rite. To the majority (and I think it is a majority) in the Friars of the Immaculate, this may feel like a crucifixion. The traditional rite may well have been the reason they entered the Order.

It is true that this dispute was begun under the reign of Benedict XVI, but do we really believe that Benedict XVI would have come down like a tonne of bricks against the Mass in the Extraordinary Form, requesting permission from Rome for the celebration of the Mass that he himself had enshrined as needing no formal request for its lawful celebration?

Let us leave it there. It is, as Fr Angelo has said, an internal matter and his statement is a model of obedience. We would expect nothing less from an Order that under the care of their Seraphic Father Francis.
at July 30, 2013

I can´t see how this is an internal matter.
I think the traditional catholics should take of their rose-tainted-glasses through wich they look at this Pope.
The liberal catholics including cardinals and bishops understand his mindset very well .
How Alberto Melloni an Ban Ki-Moon praises him is very telling.

It's quite obvious to me that the Franciscan who wrote this piece is one of the ones who complained. Simples.

"It is true that this dispute was begun under the reign of Benedict XVI, but do we really believe that Benedict XVI would have come down like a tonne of bricks against the Mass in the Extraordinary Form....."

I think this is the point isn't it. I thought Pope Francis was supposed to be all sunny and light and very much the epitome of the phrase 'you catch more flies with honey not vinegar'. It doesn't look like it with a decision like this. Together with the Pelagian reference, which okay was only directed at Latin America, one can't help but get the feeling he's not enamoured by matters traditional and doesn't see it in a positive light. One hopes new details/clarifications/reassurances will emerge in the next few days, but if they don't it's not looking good if you like the TLM and things traditional.

It is all perplexing. I do sympathise with those who follow the EF, although I feel the OF in Latin and well clelbrated is more reflective. Do your know the Association for Latin Liturgy? their meetings have good music and good talks. I feel we need to pursue Pope Benedict's project of the the reform of the Reform.
Having said that, I do feel for those who have joned this order because of it's charism.

As you suggest, it's not so much the dispute as the nature of the resolution that implies so much. How can the pope ban the Mass if the Mass is licit and undertaken by an ordained priest? It makes the permission to say the Latin a prize for good behaviour which in itself down-grades its status from being ordinary to being, I suppose, extraordinary. If it's the Mass, and it's really a priest who is saying it, according to the correct norms, even the pope can't justifiably prevent it. And yet he has which means, I suppose, that he doesn't think it's entirely the Mass.

I'm not SSPX. I don't even attend the Latin (Oh that I could!) and I have seen, attend regularly, perfectly decent NO Masses but I think this is appalling. My mum has always said that the progressive materialists won't go quietly but would resist the [re]turn to faith and reason with focus and intent. Well, here we go.

Yes, it's an internal dispute that we aren't privy to (and maybe never will be) but Fr. Angelo is not a friend of Tradition and the Traditional Mass so it is none too surprising, the tone of his explanation. Perhaps he's pleased as punch with the decree.

Exclusive use of the tridentine rite was imposed on the community by the then superior without consultation with the wider congregation - he effectively changed the religious order's constitution by his own decree. That isn't how religious orders are meant to work. A number of the order's older members objected because it wasn't what they had signed up to. The prayer life of the congregation became ordered to the 1962 liturgical books and the new rite was effectively supressed. This impacted the older members of the order who are stationed in parishes. Only the tridentine rite could be celebrated in the order's parishes and it wasn't a very popular decision with the parishioners. The orders superior at the time exceeded his power, he does not have the right to prevent the order's priests from celebrating the ordinary rite of the church. His decision caused discord and division.

There is every reason to believe that this decision was recommended by the apostolic visitor and was simply signed off by Francis. The apostolic visitor was appointed by Benedict who initiated the process. The message from this action is a warning to traditionalists - you can make use of the older liturgical rites but do not try to impose them on others and get along in harmony with your brothers/sisters or the default and ordinary rite of the church will be imposed upon you once again.

A priest of the Order has confirmed that this intervention was already underway during the pontificate of Pope Benedict and entrusted to superiors appointed by him. http://maryvictrix.com/2013/07/29/the-fis-and-pope-francis/

Your link is to the post quoted in this one! And "Only the tridentine rite could be celebrated in the order's parishes" obviously isn't true (cf. http://www.lmschairman.org/2013/07/trouble-for-friars-of-immaculate.html).

I have no particular axe to grind here, except that my strong attachment to the old liturgy makes me concerned about this move, but I don't like to see obvious errors uncorrected.

I stand by my comment, it was the attempt of the order's superior to mandate the 1962 rite on all over the order (including those parishes they provide pastoral provision to). It was this attempted imposition that pushed the complainants to appeal to Rome. The superior's instruction to use only the 1962 books was not able to take effect while the complaint was being reviewed by Rome so the complainants continued to say mass in the new rite. The papal appointee upheld the complaint and as such any provision under SP to make use of the 1962 books without explicit authorisation has been withdrawn.

Simon - granted there do not appear to have been these difficulties within the order in the uk. But this was the situation on the continent.