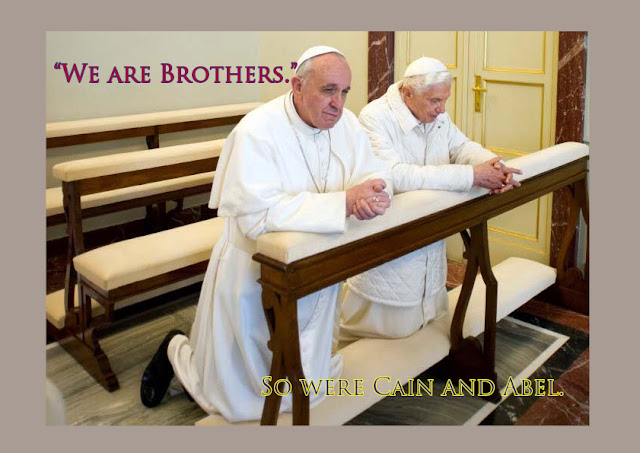 “I love Benedict XVI, he’s a humble man of God and a man of prayer. When he resigned, it was a great example … some say to me, how is it possible to have two popes in the Vatican? I heard a beautiful phrase that it’s like having your Grandpa at home, someone who’s wise, venerated, loved, and listened to. If I have a problem, something I don’t understand, I can ask. On the Vatican leaks scandal, for example, he explained everything with simplicity and a spirit of service."
~ Pope Francis

The Catholic Herald today highlights a quite breathtaking series of quotes from Pope Francis in an 'off the cuff' interview he gave to journalists on the 12-hour flight from Rio to Rome. The contents of the interview have been covered by the 'National Categorically Not Very Catholic Reporter'.

Issues covered in the interview include:

Quite sweeping, I think you'll agree. I apologise to anybody offended by the headline image but I'm sure Pope Emeritus Benedict will be none too thrilled when he hears the fate of the Franciscans of the Immaculate. Perhaps he already has.

One thing is certain amidst what is beginning to feel like a mini-tribulation. We are in for a radical and very different papacy to what Catholics have perhaps hitherto experienced. Hold on tight. This is going to be a rollercoaster. Hold fast to the Magisterium, pray for His Holiness and... 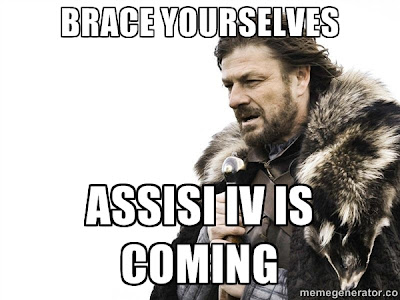 I too am going back to the garden. This is too much.

I too am going back to the garden. This is too much.

This seems like a distortion of the Deposit of Faith - and persecution of the Faithful.

This is very worrying!

It seems like a metaphor for what's happened in a neighbour's garden. It's a pretty barren space, except for a young plum tree near the fence. In spite of the constant hard knocks from a football which have shaken it this way and that, it has produced wonderful fruit that has never been harvested but left to rot on the tree.
Today the tree was cut down.
I hear a lot of banging and clanging. It wouldn't surprise me if the tree were to be replaced by a skateboard ramp. Must keep up with the times.

Our new Pope is now defending Gay priests (as well as banning the Traditional Latin Mass).

The society of Pius 10th had better get ready for a great deal of new members.

Oh dear, what a muddle.

Judging by the comments on John Allen's NCR report on the HF interview on the plane back to Rome, the homosexuals are triumphant.

God knows how this is going to be interpreted in this country. Stonewall must be rubbing their hands in glee thinking of all the Catholic Schools they can now infiltrate.

As for the Ricca affair, it looks as if he is going to get away with it.

This is the third whammy in one day, following on behind accusations that traditionalists are Pelagians and the news that the Francisan Friars Immaculate have been forbidden to say the EF Mass without prior permission, thus abrogating Benedict's Summorum Pontificum.

That in itself is scary, particularly when we glimpse the HF's future vision of the Church with dancing bishops. It could be bye-bye Latin Mass. The SSPX were very wise to keep at arms length

Particularly hurtful is the HF telling me that as a traditionalist I am a Pelagian, claiming that I believe can be saved without Divine aid. Thank you very much HF for kicking me in the teeth!

Have some peace at the allotment.
I hope it for you.