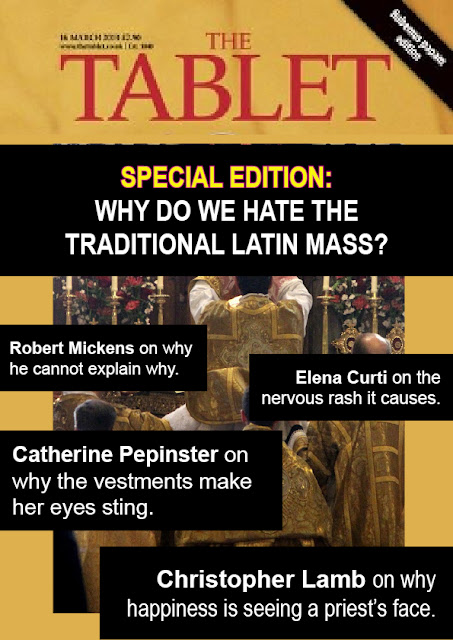 Bizarre. In The Tablet's latest news in which is reported the appointment in Edinburgh of the new Archbishop-elect, Mgr Leo Cushley, the magazine saw fit to insert into their report this little nugget...

Of course, liturgical vision is important, but one gets the feeling that The Tablet are seeking to reassure their readership, or perhaps more themselves that in Scotland the Traditional Latin Mass will not be encouraged. Was this a dig at Catholics who love the Latin Mass?

Secondly, while it  may be true that Mgr Cushley has never publicly said Mass in the Extraordinary Form, have The Tablet's news team been gifted with sight into his soul? I guess The Tablet are banking on the new Archbishop-elect being a Tabletista. They had better hope that he is, otherwise...well, if he isn't, he now knows what would make them really disappointed.

I sometimes wonder who is more obsessed by the Latin Mass - those who love it, or those who hate it. My blogging in defence of the Mass of Ages is born out of love for the Mass and the Pope who liberated it. The Tablet's obsession with it is born out of fear, loathing and perhaps more than a bit of trembling. The Tablet's team are like soldiers at Christ's tomb. They thought it was dead but it rose again. What to do but panic?
at July 24, 2013

Can't help thinking that what this actually boils down to is that the Tablet writers are heretical on the Mass, its pretty common from what I can see for those who believe in women priests. The TLM is therefore a threat to them because its emphasising a whole theology they don't agree with and want to change, e.g., this is what a certain Victoria Rue, PhD, says on the Women's Ordination Conference website:

"If you take away the sacred power of a sacrificial priesthood and instead offer a model of priest as community member, and liturgical leader, then theology begins to shift as well as the structures that support it. Even the face of God begins to change. If the Mass is not a ritual sacrifice then we no longer invoke the image of a father who requires the death of his only son. Instead we offer thanksgiving to a God that suffers with us in the person of Christ, births with us, walks with us. And if the priest is a member of the community and liturgical leader, she or he is not necessarily celibate but is married or lives with a domestic partner, is heterosexual, or homosexual."

What she seems to be denying is the Holy Sacrifice of the Mass. Is this what the Tablet has a problem with? Notice also that she says "theology begins to shift.." the two go hand-in-hand, if you have women priests necessarily this will have knock-on effects to theology.

The problem with the modernist/liberal is that they are always trying to smuggle in new bits. They use the same words but they define them differently. The other problem is that some are "moderates" and some more extreme so there's a sliding scale.

It's a kind of spiritual madness to have an aversion to the mass that produced so many saints and fed the Church through most of Her years. We know this aversion doesn't come from God, and so if it's not from God then that leaves...

Mickens always says 'Tridentine' rather than 'Extraordinary Form'. What a narrow outlook he has!