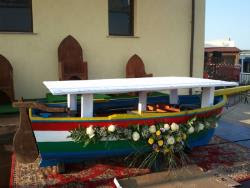 Pope Francis has been celebrating Mass for islanders and migrants in Lampedusa this morning.

I've seen this image of the Altar upon which the Holy Sacrifice of the Mass was offered this morning. I discovered the image of this 'themed' Sacred Altar on Vatican Radio. The Altar was fashioned out of a colourful fishing boat.

'Immigrants who died at sea, from that boat that, instead of being a way of hope was a way of death. This is the headline in the papers! When, a few weeks ago, I heard the news – which unfortunately has been repeated so many times – the thought always returns as a thorn in the heart that brings suffering. And then I felt that I ought to come here today to pray, to make a gesture of closeness, but also to reawaken our consciences so that what happened would not be repeated. Not repeated, please!

But first I want to say a word of sincere gratitude and encouragement to you, the residents of Lampedusa and Linosa, to the associations, to the volunteers and to the security forces that have shown and continue to show attention to persons on their voyage toward something better. You are a small group, but you offer an example of solidarity! Thank you! Thanks also to Archbishop Francesco Montenegro for his help and his work, and for his pastoral closeness. I warmly greet the Mayor, Mrs Giusy Nicolini. Thank you so much for all you have done, and for all you do. I give a thought, too, to the dear Muslim immigrants that are beginning the fast of Ramadan, with best wishes for abundant spiritual fruits.

The Church is near to you in the search for a more dignified life for yourselves and for your families. I say to you “O’ scia’!” [trans.: a friendly greeting in the local dialect]. This morning, in light of the Word of God that we have heard, I want to say a few words that, above all, provoke the conscience of all, pushing us to reflect and to change certain attitudes in concrete ways. “Adam, where are you?”

This is the first question that God addresses to man after sin. “Where are you Adam?” Adam is disoriented and has lost his place in creation because he thought to become powerful, to dominate everything, to be God. And harmony was broken, the man erred – and this is repeated even in relations with his neighbour, who is no longer a brother to be loved, but simply someone who disturbs my life, my well-being. And God puts the second question: “Cain, where is your brother?”

The dream of being powerful, of being as great as God, even of being God, leads to a chain of errors that is a chain of death, leads to shedding the blood of the brother! These two questions resonate even today, with all their force! So many of us, even including myself, are disoriented, we are no longer attentive to the world in which we live, we don’t care, we don’t protect that which God has created for all, and we are unable to care for one another. And when this disorientation assumes worldwide dimensions, we arrive at tragedies like the one we have seen.

“Where is your brother?” the voice of his blood cries even to me, God says. This is not a question addressed to others: it is a question addressed to me, to you, to each one of us. These our brothers and sisters seek to leave difficult situations in order to find a little serenity and peace, they seek a better place for themselves and for their families – but they found death. How many times to those who seek this not find understanding, do not find welcome, do not find solidarity! And their voices rise up even to God!

And once more to you, the residents of Lampedusa, thank you for your solidarity! I recently heard one of these brothers. Before arriving here, he had passed through the hands of traffickers, those who exploit the poverty of others; these people for whom the poverty of others is a source of income. What they have suffered! And some have been unable to arrive! “Where is your brother?” Who is responsible for this blood? In Spanish literature there is a play by Lope de Vega that tells how the inhabitants of the city of Fuente Ovejuna killed the Governor because he was a tyrant, and did it in such a way that no one knew who had carried out the execution. And when the judge of the king asked “Who killed the Governor?” they all responded, “Fuente Ovejuna, sir.” All and no one!

Even today this question comes with force: Who is responsible for the blood of these brothers and sisters? No one! We all respond this way: not me, it has nothing to do with me, there are others, certainly not me. But God asks each one of us: “Where is the blood of your brother that cries out to me?” Today no one in the world feels responsible for this; we have lost the sense of fraternal responsibility; we have fallen into the hypocritical attitude of the priest and of the servant of the altar that Jesus speaks about in the parable of the Good Samaritan: We look upon the brother half dead by the roadside, perhaps we think “poor guy,” and we continue on our way, it’s none of our business; and we feel fine with this. We feel at peace with this, we feel fine!

These are the two questions that God puts at the beginning of the story of humanity, and that He also addresses to the men and women of our time, even to us. But I want to set before us a third question: “Who among us has wept for these things, and things like this?” Who has wept for the deaths of these brothers and sisters?

Who has wept for the people who were on the boat? For the young mothers carrying their babies? For these men who wanted something to support their families? We are a society that has forgotten the experience of weeping, of “suffering with”: the globalization of indifference has taken from us the ability to weep!

In the Gospel we have heard the cry, the plea, the great lament: “Rachel weeping for her children . . . because they are no more.” Herod sowed death in order to defend his own well-being, his own soap bubble. And this continues to repeat itself. Let us ask the Lord to wipe out [whatever attitude] of Herod remains in our hears; let us ask the Lord for the grace to weep over our indifference, to weep over the cruelty in the world, in ourselves, and even in those who anonymously make socio-economic decisions that open the way to tragedies like this. “Who has wept?” Who in today’s world has wept?

O Lord, in this Liturgy, a Liturgy of repentance, we ask forgiveness for the indifference towards so many brothers and sisters, we ask forgiveness for those who are pleased with themselves, who are closed in on their own well-being in a way that leads to the anaesthesia of the heart, we ask you, Father, for forgiveness for those who with their decisions at the global level have created situations that lead to these tragedies. Forgive us, Lord! O Lord, even today let us hear your questions: “Adam, where are you?” “Where is the blood of your brother?” Amen.'
at July 08, 2013

The Pope is the successor of the fisherman and our blessed Lord was known to use the boat for preaching to the crowds on the shore!


A very sobering sermon by the Holy Father. Thank you for posting it.

Notwithstanding my earlier comment, I think it looks frightfully twee.

I see Pope Francis used a wooden chalice from wood retrieved from a boat that was wrecked there. What a fitting tribute to all those that died by this humble pope.

I don't normally like innovations like the addition of the boat but watching the Mass yesterday and listening to Pope Francis it all seemed so relevant. The ship's wheel in front of the pulpit could be read as guiding the barque of Peter too.

With the phrase 'Globalisation of indiference' the Pope really hit home to us as he described us as 'a society who has forgotten how to weep for others.'

If I had to criticise anything there it would be the dreadful tie-and-dye vestments of the two concelebrants - I believe one was an Archbishop. Thankfully the Holy Father's vestments were simple and dignified and very fitting to the occasion.