Homeless Brighton Couple in Cemetery Not 'In Need' 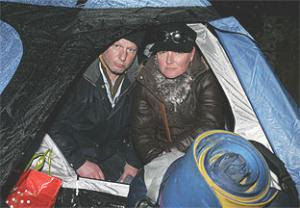 A high density of homelessness is a well known statistic to Brightonians. The couple pictured above however, who are sleeping in a local cemetery in a tent have hit the headlines of the Argus however because of the Council's insistence that they are not 'in need' of supportive accommodation.

A homeless couple face spending the winter living in a tent in a graveyard because council officials say they do not need urgent help.

Karen and Richard Smith pitch their tent after dark each night in a Brighton cemetery so they do not become a target for gangs. At dawn, they pack up and begin their daily routine – washing in public toilets and selling magazines to Brighton shoppers.

Now they are preparing to spend a second Christmas outdoors after being repeatedly turned down for housing by Brighton and Hove City Council because they are not in “priority need”. They claim that if they were addicted to class A drugs they would be whisked into bed and breakfast accommodation by outreach workers.

Instead, they make a living from the charity of passers-by while they wait to see if the council can find them a home. Mrs Smith, 40, who has a heart condition, believes another winter outdoors could kill her. She was briefly housed while she recovered from an operation earlier this year but was then thrown back on the street – and handed a £140 council tax bill.

She said last night: “It is freezing cold, muddy and wet. This winter’s going to be even worse than the last one. I think it could finish me off. The last two mornings I’ve got up and haven’t been able to speak for hours because of the cold.”

The couple have been through 15 tents in two years, sapping the cash they raise selling magazines on the streets. Mrs Smith is a familiar sight outside HMV in Western Road, while Mr Smith, 44, sells the Big Issue outside the nearby Waitrose.

Mrs Smith said Brighton and Hove City Council told the couple they might be housed early next year but has not offered them anywhere to stay until then. She became homeless after fleeing a violent relationship in 2000. She and her three children were housed by social services in Portsmouth but ended up living in squats. Eventually her son was taken into care and the family split up, with Mrs Smith having nowhere to go but the street. She said homelessness was a trap from which it was almost impossible to escape, adding: “The first couple of months living on the streets are scary. You don’t want to get used to it. You want to be part of society. I have qualifications in business and computing. I could be doing something better with my life. But without an address it’s impossible to get anywhere.”

A council spokesman confirmed the couple did not meet requirements for emergency housing. “The homeless legislation we have to work to sets out which category of household the council has a duty to provide accommodation for. Ms Smith and her husband applied to us for housing last year and then again earlier this year. In both cases they were found not to be in priority need under homeless legislation.”
at November 18, 2008