Today is the Feast of... 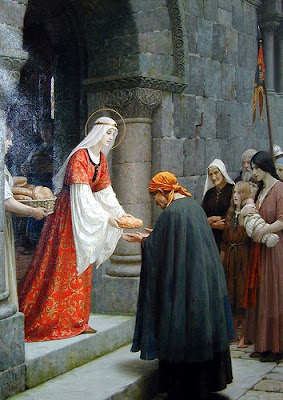 St Elizabeth of Hungary
"She lays her hands to the spindle, and her hands hold the distaff. She stretches out her hand to the poor; yes, she reaches forth her hands to the needy. She is not afraid of the snow for her household: for all her household are clothed with scarlet. She makes herself coverings of tapestry; her clothing is silk and purple. Her husband is known in the gates, when he sits among the elders of the land. She makes fine linen, and sells it; and delivers girdles unto the merchant. Strength and honour are her clothing; and she shall rejoice in time to come. She opens her mouth with wisdom; and in her tongue is the law of kindness. She looks well to the ways of her household, and eats not the bread of idleness. Her children arise up, and call her blessed; her husband also, and he praises her. Many daughters have done virtuously, but you excel them all."

St. Elizabeth was born in Hungary in 1207, the daughter of Alexander II, King of Hungary. At the age of four she was sent for education to the court of the Landgrave of Thuringia, to whose infant son she was betrothed. As she grew in age, her piety also increased by leaps and bounds. In 1221, she married Louis of Thuringia and in spite of her position at court began to lead an austerely simple life, practiced penance, and devoted herself to works of charity.

Her husband was himself much inclined to religion and highly esteemed her virtue, encouraging her in her exemplary life. They had three children when tragedy struck - Louis was killed while fighting with the Crusaders. After his death, Elizabeth left the court, made arrangements for the care of her children, and in 1228, renounced the world, becoming a tertiary of St. Francis. She built the Franciscan hospital at Marburg and devoted herself to the care of the sick until her death at the age of 24 in 1231.

St. Elizabeth is the patron saint of bakers, countesses, death of children, falsely accused, the homeless, nursing services, tertiaries, widows, and young brides. Her symbols are alms, flowers, bread, the poor, and a pitcher.
at November 17, 2008