Yesterday Was the Feast of... 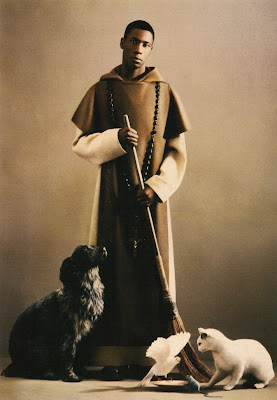 It is ironic that on election day in the US, when a black man could be voted in to become "the most powerful man in the world", to contrast the attitudes and values he espouses with that of St Martin de Porres, who would, without doubt, condemn Obama for his enthusiasm for infanticide, as demonstrated by his commitment to sign the Freedom of Choice Act as soon as he can and his shocking refusal to support the Born Alive Infants Act in the Senate, a bill that even pro-choice societies supported. While many of us wish for a Catholic president or a Catholic PM, one wonders whether it is good for a Catholic to be so powerful. The great humility of the Saints was that they sought not earthly power, knowing in their hearts, that our Blessed Lord, "although he existed in the form of God, did not deem equality with God something to be grasped, but emptied Himself, taking the form of a servant and being made in the likeness of God."

Martin had great charity for friend and foe, and his love for animals was comparable to that of St. Francis of Assisi. Race, color or creed did not matter to our saint; his first thought was to help others in any way that he could; be it giving them food or money, binding their wounds, or giving them sound spiritual or practical advice – no act of charity was left undone. Since his youth, Martin had learned to be humble. And in the monastery, he humbled himself; always taking the lowest place and never defending himself. At a time when everyone knew about Martin's holiness, and the most prominent ecclesiastics and laymen begged him for advice, a fellow religious asked him, "Brother Martin, would it not be better for you to remain in the house of his Excellency, the Archbishop of Mexico, rather than stay here cleaning the toilets of the monastery?" Without hesitation he replied, using the words of King David: "I have chosen to be an abject in the house of my God." Psalm: 83; 11.

St Martin de Porres, pray for the soul of America, for America's souls, the unborn and for all of us.
at November 04, 2008