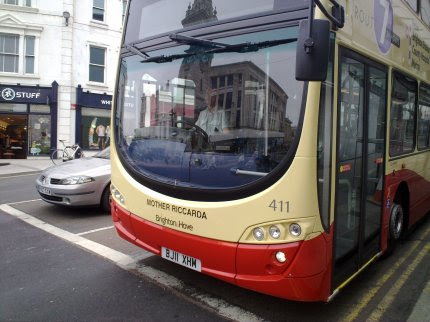 The author of the St Mary Magdalen Choir Blog has alerted us to the fact that Brighton and Hove Buses have dedicated a bus to Mother Riccarda, the heroic nun who hid both Jews and runaway Nazis in Rome, who was baptised in St Mary Magdalen Church, Brighton and whose cause at the Congregation for the Causes of Saints at the stage of 'Servant of God'.

A cause for canonisation is one thing...but your name on a Brighton bus?! It doesn't get much better than that!

According to the Brighton and Hove Bus webpage...

'Connections with Brighton and Hove: A Brighton nun who saved the lives of more than 60 people from Nazi death camps during the Second World War may be made a saint. Mother Riccarda Beauchamp Hamborough hid Jews, Communists and Poles in her Rome convent. By her courageous action, she prevented them from being taken to the gas chambers at Auschwitz in 1943. She was helped by her superior, Blessed Mary Elizabeth Hasselblad. Pope Benedict XVI made her a "servant of God" in a ceremony in 2010. She is now two steps away from sainthood. The Church will now be looking for a divine sign to help her towards the next stage. This will have to be evidence of a miracle connected with her since her death. Mother Riccarda was born in London in 1887 and was baptised at St Mary Magdalene Church in Upper North Street, Brighton. Little is known about her early years in Brighton before she moved to Rome aged 24 to become a nun. She died aged 79 in 1966 and her body was laid to rest in the Rome convent. Meanwhile there are plans for a shrine in her honour in Brighton.' 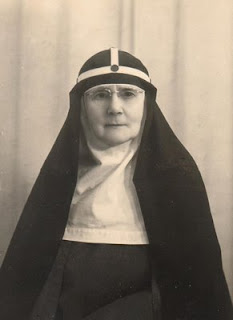 Wanted: Miracles!
Mother Riccarda's bus goes to Brighton Marina. I might contact the Bus company and produce a load of Mother Riccarda leaflets so people can learn about her heroic and saintly life and spread knowledge of the Faith and of how jolly kind and goodly this lady, among others, was, in responding to Pope Pius XII's request to please hid Jews in Rome from the evil Nazi regime. Obviously, the bus company will be wanting a small reliquary on the Mother Riccarda bus somewhere!
at May 23, 2011

Well well! Isn't that nice. I find myself looking at the names and often wondering who many of them were or what their connection to the city was.

Pity the Brighton and Hove Bus Company spelt St Mary Magdalen's incorrectly on their web site! Did not know that existed so shall go and look up some of the others to find out who they were. I spotted a Russian sounding name the other day but had forgotten it by the time I got home so will look it up now. Thanks for the info Laurence.

Have just noticed that it was sharp-eyed Clare who spotted the bus. And she says on her blog that those names on the single decker buses are still alive, and the dead are on the double decker buses. I never realised that.

Wow. That kind of makes up for the one named after Julie Burchill, I guess...

And Nathan said unto him
"Can anything good come out of Brighton?"
And Laurence replied "Come and See".
Apologies to John 1:46

Isn't it the most exciting thing? The bus driver looked rather bemused as l stood in the road taking the photo. Maybe it was a miracle that l didn't get run over by the bus.

Splendid. Having seen her on Fr Ray's admirable blog, I did wonder who she was (and why that extraordinary headgear) but now I know.

Your leaflets idea is an excellent one; even if they are read only by the bus company's management and drivers, they are bound to do some good.

What's the speciality for praying to her, I wonder?

"Wanted: Miracles!"
Well there has been one:
Laurence has been healed of his work phobia enabling him to enjoy the responsibility of invigilating the young and be paid.
Th delusions of grandeur accompanying that condition whereby mundane jobs are believed to be unworthy have gone.
With the cure has come the greater respect of his readers.

We hope a second healing might be of the multiple post compulsion which has now extended to the Guild.

As somebody observed on another blog it is in danger of becoming
THE MERRY ENGLAND SHOW
God intended us to use our talents and Laurence is a skillful word-smith but discernment of quality over quantity is required.
We trust that the compulsive drive to mega-blogging will be cured.