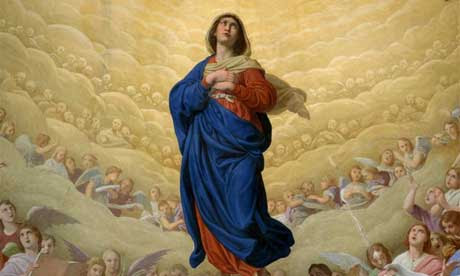 For the Church, belief has always been important. Erroneous beliefs (heresies) have been viewed as dangerous and potentially schismatic because they damage our view of Our Lord's nature (fully human and fully divine) and our own nature also. Belief in the Assumption of Our Lady is important, so important we are warned that the wrath of God is upon anybody who denies this doctrine. Some beliefs are so important to the Church that our souls are at risk if we do not believe them. This the Church teaches in all Her wisdom and like little children we suckle at Her breast and drink because She can neither lie nor err in matters of faith and morals.

Governments and politicians rely on a docile, credulous, believing, unsceptical population who believe what they tell them. That is how they survive. Governments and politicians are, on the whole a corrupt group of individuals. Just look at which companies funded Obama's election campaign (Planned Parenthood) and which companies are now rewarded (Planned Parenthood). Governments fear an educated, informed, investigative, sceptical population who think twice about believing everything they tell them. Even the mainstream media nowadays fears this because the media, too, have an interest in spinning Government stories. Both parties rely on each other. The fourth estate is severely compromised and 'the first casualty of war is truth', especially when politicians are fighting only for their political lives.

Atheists are those who call for empirical evidence for expressed truths of religion. A myriad Miracles cannot convince them - they are dismissed out of hand. We present to them and believe in the testimony of the Apostles concerning the Resurrection of the Lord. Our evidence is their word. We believe in the Assumption of Our Lady. Our evidence is defined by Successor of St Peter who alone can speak infallibly concerning Faith and Morals, from the Throne, ex cathedra. In matters of Faith and Morals, the Church can neither deceive, nor be deceived. Therefore, we believe. The Church is a Divine institution, albeit made up of flawed human beings.

Politicians lie and deceive. They have little faith and few morals. 'Obama heroically killed Osama on May 1st' is not an article of Faith. It is not the Gospel. The wrath of Almighty God is not upon me if I do not believe it. Politicians only want to be re-elected. I believe that Our Lady was assumed body and soul into Heaven because the one who defined the dogma, widely believed by Christians since the Apostles, is supremely trustworthy above all men. Frankly, if you believe anything that a US President, any US President, especially one on the political ropes, says concerning the death of Osama Bin Laden, without a shred of evidence to back up his claim, then you can believe that if you wish, but, personally, I do not believe in fairy tales.
at May 05, 2011

Excellent post. Call me naive, but I must admit that I had not really questioned the US government's account of the death of Osama Bin Laden, until I read this post and your later post 'Damien Thompson on Alex Jones'. Incredible and unbelievable these conspiracy theories may be, but not impossible.
Thanks for the wake-up call!