Looking for a new background picture for my own blog, I've stumbled across this very good site, entitled 'The New Theological Movement', which is an interesting name, in the light of the blog of a similar name, The New Liturgical Movement.

The contributers to the New Theological Movement, as far as I can tell, are all priests or deacons. Here is a portion of a post from November last year on the Resurrection of the Body, which the writer calls, 'the most commonly denied dogma'...

“On no point does the Christian faith encounter more opposition than on the resurrection of the body...”

So writes St. Augustine (cf. En. In Ps. 88,5), and the point is re-affirmed in the Catechism of the Catholic Church (CCC 996) – “It is very commonly accepted that the life of the human person continues in a spiritual fashion after death. But how can we believe that this body, so clearly mortal, could rise to everlasting life?”

First, we must consider whether the body which is raised is identical with the mortal body we now possess. We will not delve into the very important and interesting theological speculation regarding the qualities of the risen body, but will simply consider the identity of the resurrected body – that it is the very same body as was separated from the soul in death.

Second, we will consider the most popular objection against the resurrection of the body – whether a cannibal will be resurrect in his own body. The question of cannibalism gathers several issues together: First, how can both the cannibal and his victim rise, since the cannibal has consumed the other’s flesh? Second, what if a bear eats a man and then a man eats that bear? Third, what about organ donors? Fourth, what about children who die when only just barely conceived, how will they have enough matter for a resurrected body? Many many other questions besides are answered in the course of discussing the more basic question of cannibalism and the resurrection – we will even see what happens to all our excess fingernail and hair clippings! 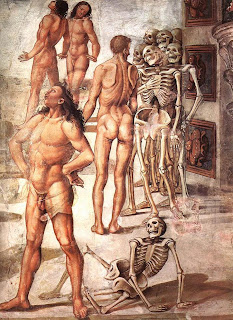 Our material bodies will be reunited to our immaterial souls: “We believe in the true resurrection of this flesh that we now possess” (Council of Lyons II: DS 854). Based on many Scriptural texts, the Church affirms that this very body, which dies, will one day be raised up. In the resurrection, we will not be given a different body; the same body will be returned, but it will be renewed and transformed.

The body will change, but it will still remain itself. In every true change, something remains and something changes – thus, when a piece of metal is melted, many of its properties are changed, but there is an underlying identity which remains; hence we can say that the metal is heated (it does not cease to be what it is when it is heated). Consider a different example – when a piece of wood is burnt to ashes, many of its properties are changes, and even its underlying identity is changed; it is no longer a piece of wood, but is now only ash. In this second case, what remains is only the matter; not the identity of the object itself. Finally, another example – when God creates a soul there is no true change; for there was nothing before, nothing old remains, but a whole new thing is created (likewise, if an animal soul goes out of existence, there is no change; it simply ceases to be).

Moreover, it will not be that our souls will be united to bodies newly created; the resurrection is just that, REsurrection! The souls is REunited to the body – which means it is not a new/different body, but the very same body to which it had once been united and which was once alive. It will be this very flesh which is raised up – “In my flesh I will see God; I myself will see him with my own eyes; I, and not another.”

For full article, click here. For the home page, click here. O internet! I love you more than I did yesterday, but not as much as I will tomorrow!
at May 23, 2011

Blimey! Powerful stuff. Overwhelming to my mind, until I remember Istarted as a single cell. Multiplication of species has always been part of my origin!

I agree with shadowlands - powerful stuff indeed and another fascinating blog to peruse and learn from.

This is the kind of thing which REALLY gets on my thrupennies...

We criticise scientists for their abandoning philosophy - yet how many metaphysical speculations deny basic science and in the process leave themselves open to utterly unnecessary scorn, derision and supposed refutation...

This stuff is counterproductive...

We should leave the dogma alone - it declares a few fundamental principles - there is no need to metaphysically speculate on the HOW - because when we do we invariably get it wrong!!!

All we need to know is it happens.
We are a holism of an embodied soul which achieves a resurrected body after death - that should satisfy our curiosity - and keep us out of trouble - the last thing we need to do is guess - because nine times out of ten we guess wrongly...think 'limbo' which led to centuries of grief, think 'ensoulment' which led to an ethical quagmire and the genocidal warnock report, think 'there must have been a single parentless adam and a single eve'and the derision of evolutionists...or the cruelty and presumption of telling a kid that their pet dog isn't in heaven [says who? God hasn't said anything on the subject!]

all unnecessary - all intellectual arrogance - all antipathetic to the evangelical and doctrinal dignity deserving to the faithful...

In the old days we used to declare 'we don't know - it's part of the divine mystery; but this is what we do know...x,y,z etc'

When theologians start to show off they lose their saltiness - they politely need to be told where to get off and have a big bucket of icewater thrown over them.

is there a Resurrection of the Body? Yes
Is it IN SOME WAY related to the body in which we were conceived and died and in which our soul lived, moved and had its being?
Yes

God gives us Divine Revelation to keep us out of trouble with idle speculation.
Sure - let our imaginations run wild - let us dream and inspire ourselves with all manner of wonderings...let us consider any amount of possibilities...

Reading it now I see what you mean.