"I've been saying this stuff for ages. I'm so glad the Pope has finally got around to reading some of Mgr Basil Loftus's columns in The Catholic Times. It is rewarding to know that my hard work highlighting his dangerous articles on the Resurrection of the Lord on my own blog as Chairman of the Latin Mass Society, have finally been recognised by the Holy See." 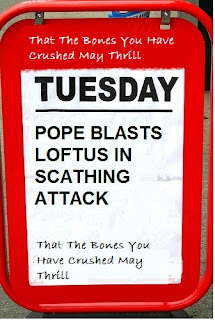 While stunned papal vitriol victim, Loftus, was yesterday unavailable for comment, Catholics around the United Kingdom assumed that his lawyers were already on the case to sue the Pope and anyone who carried his comments on their blogs who attributed the target of them to be himself, because he was not himself formally named.

One Catholic blogger said, "No, this is true, but seriously, have you read that article he did on the Resurrection?"

Fr Frederick Lombardi tried to diffuse the row, suggesting that there were "any number" of people in the Catholic Church who could feel that these words of the Pope could be attributed to them, "not least the array of Tablet columnists and vast numbers of its readership".

The controversial Pope is said to has grabbed and kissed the babies of strangers numbering anything between 15,000 and 900,000 since assuming office in the Vatican - with complete immunity from prosecution - despite numerous arrests being made on ordinary members of the British public when they attempt to do the same.

Francis recently hit the headlines when he made a surprise telephone call to an English Catholic priest who had been victim of character assassination by The Argus newspaper.

According to one report, Pope Francis said to the priest...

"Keep doing what you are doing, pray and don't worry. Offer one Holy Sacrifice of the Mass, preferably in the traditional rite of the Church for me and my intentions. Don't let the modernists get you down. Above all, keep going with the soup run, doing the good work you do for the Lord and all will be well with you, your enemies will be left, in the end, utterly confounded. I'm sending you a spiritual bouquet of 4,591 Rosaries I have collected from the people of Rome. Whatever you do, don't give up the blog - avanti, avanti, no?"
at September 11, 2013

Email ThisBlogThis!Share to TwitterShare to FacebookShare to Pinterest
Labels: Meant to be funny, Please don't sue me, Satire

Admit to laughing out loud at this. Watch it Laurence - Loftus might not think it funny and you know what happened to at least two well-known bloggers. He might not read your disclaimer at the bottom!