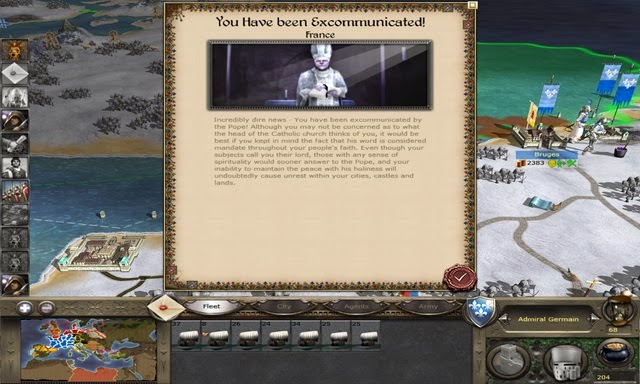 A thought popped into my mind today following news of the excommunication of an Australian heretical priest. The thought was this:

'Did Pope Benedict XVI excommunicate anyone?'


So, I've just done a search. This pontificate just gets more perplexing. It's a rollercoaster. No two days are the same. So here's the gist:

In the case of the Bishop of Toowoomba, the Bishop William Morris was, I believe laicised, not excommunicated, though I am happy for someone to correct me. Benedict XVI didn't like just excommunicating people. It wasn't his style. He had the exterior of a rottweiler, but was on the inside something of a chihuahua. That's a compliment, by the way. In examining this Wikipedia article on excommunication, throughout the 20th century, these events were incredibly rare, rarer in the 21st.

But now we get to Pope Francis...

In fact, excommunications usually - almost always - come from a Diocesan level, unless the one being excommunicated is a Bishop perhaps, so it is strange therefore that Pope Francis and Rome acted 'unilaterally' in excommunicating a renegade priest supporting lady priests and homosexual acts.

It is strange - especially in the light of the Pope's recent interview - that such action was taken out of concert with the Bishop of the Diocese in which the priest ministered in his own heretical - though not uniquely heretical - way. The interview with Pope Francis made it clear that the Pope believed this concerning complaints about orthodoxy:

"It is amazing to see the denunciations for lack of orthodoxy that come to Rome. I think the cases should be investigated by the local bishops’ conferences, which can get valuable assistance from Rome. These cases, in fact, are much better dealt with locally."


Others have noted that this is a problem because at a local level, so often, nothing happens to stop wolves from entering the sheepfold and tearing the lambs to pieces. I say this because behind the scenes Bishops even in dear old England seem to be working towards advocating similar things and then denying anything ("nothing to do with me guv'nor") when challenged about it. So are we to be glad about this extraordinary measure which we are told came through (at least) the Pope's office, or a little concerned? It is not so obvious as one would at first think.

Benedict XVI laicised a scandalous Bishop. He lifted the excommunication on the Lefebrevist Bishops. I don't think (correct me if I am wrong) he excommunicated anyone. Perhaps Pope Francis, because he has laid the groundwork of a media-friendly first six months and because he is near universally popular within the Church feels he can do this and still hold the ship together. We hope and pray he can and governs wisely. We don't know, we certainly cannot read his mind. I'm sure we should wait for more facts to emerge, but...

Two things have me concerned though:

First: If this came straight through or from the Pope, then it is unusually 'ultramontane' for His Holiness to do this, even if this kind of action is welcomed by faithful Catholics fed up to the back teeth of heretical priests and even Bishops. Why praise collegiality with the Bishops and then excommunicate a renegade priest soon afterwards? Why not just let the Bishop do it, or get the Bishop to do it? I thought the Pope was not a 'renaissance prince' governing the Church as his personal fiefdom. Sorry to sound irreverent, but I'm confused by this. Two conflicting messages are coming through.

Second: No reason was given for the excommunication. Tim Stanley says, 'Well it's obvious', and so it is...to us...who trust in the orthodoxy and soundness of our beloved Pope. However, excommunication without a reason is a little 'authoritarian' if it comes straight from the top when a Bishop at Diocesan level could have done it perfectly well. I know I'm beginning to sound like a Tablet columnist, but first media reports are suggesting an extraordinary use of papal privilege in exercising the Keys at a time when the same Pope is calling for important decisions to be handled by local Bishops. I'm glad Pope Francis is taking charge of the Church when, at a local level, Bishops cannot be trusted necessarily to act for the good of the flock, as witnessed recently when Bishops allow wolves to come in and campaign for the kind of things this renegade priest is into. However, I'd sound a note of caution too. Can the Pope just excommunicate whoever he likes and give no reason? This excommunication has been delivered from the top down to the bottom. There is no suggestion it was done in concert with the Bishop of the Diocese. Without wishing to go against my advice concerning how to be loyal to the Pope this morning ("pray, hope and don't worry"), I'm wondering what would happen if the Pope woke up one morning and decided someone in the Church was too 'Conservative'?

Yikes. For all you priests, bishops and cardinals in Rome, may I suggest you hold back on that new car and go for something a little more Franciscan. If the car you are thinking of buying is newer than 2005, I'd think again. Quite where this whole episode leaves ACTA and Terence Weldon...and the more traditionally-minded Owlie is anybody's guess! I hope I don't get a certificate through the post tomorrow. I wouldn't wish it on Owlie nor even a wilful heretic. Ultimately, excommunication is the measure of last resort to bring someone back to Jesus Christ and His Church. St Pio of Pietrelcina told us all intrigue and scandal is useless compared to the glory of Heaven, but did he see Pope Francis's first six months coming?

Lawrence
We don't know what the correspondence was between the Holy See and the local Bishop. Maybe, Rome just got fed up with the vacillation and decided to smite.

I hope that whoever composed the letter of excommunication got the Latin correct. I recall that when ++Archbishop Lefevre was excommunicated, his staff later claimed with a certain amount of glee that the Vatican had made a mistake in the grammar.

You are right to link the excommunication with that of SSPX. What liberals and ultra trads have in common is a rejection of the Hermeneutic of Continuity as taught by Pope Benedict and Pope Francis. The liberals and the trads both reject Vatican II! a nice symmetry.

It would be great if we could get a copy of the excommunication document, adapt it, get a good forger to forge Francis's signature and send copies to the usual suspects, Pepminster, Tina Beattie, the ACTA folks etc

What larks when a bull of excommunication drops through their letter box!

My uncle was excommunicated in the early 1960s, at that time during the reign of Blessed John XXIII, I think. The cause for excommunication was that he had married a non-Catholic divorcee in a civil ceremony. I am not sure whether it was an official excommunication with the Bishop's imprimatur, or whether it was more of a casual pronouncement from a parish priest, "best not to come to Communion any more (until your wife seeks an annulment on her previous marriage and you remarry in The Church"). But for about 40 years he was denied Holy Communion. He still attended Mass regularly. The excommunication was eventually lifted by one kindly priest, who saw his faith. I'm assuming the priest sought permission from his Bishop first. Hope so!

Hey, Chihuahuas look like Chihuahuas on the outside but are Rottweilers on the inside! ;-)

PS, I love Owlie! Is it on YouTube yet? Could be a hit!

You missed off Tissa Balasuriya. I think the Australian case, as in Fr Tissa's, was one of the CDF stating that excommunication had been incurred latae sententiae, with publication of said decree being personally approved by the Holy Father.

According to this article, reason was given:

The letter, a copy of which NCR obtained and translated, accuses Reynolds of heresy (Canon 751) and determined he incurred latae sententiae excommunication for throwing away the consecrated host or retaining it "for a sacrilegious purpose" (Canon 1367). It also referenced Canon 1369 (speaking publicly against church teaching) in its review of the case.