If This Man is Not Irritating Then Why Does He Have This ASBO? 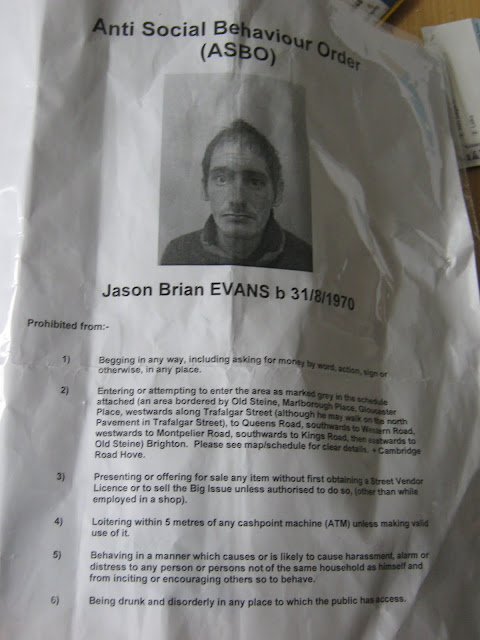 I've asked The Argus this question - no answer.

This man, Jason Evans, has been sent by God to test the love, patience and and holiness of Christians. If you don't believe that aspect of Christianity, because you are an unbeliever, or a Protestant, read the letter of St James about 'faith and works'.

Jason Evans has been sent to test my holiness, or, perhaps as a better explanation of what holiness is, to test whether my faith is real and sincere - whether I love God and my neighbour or whether I do not. I do not always pass this test. In fact, I regularly fail it. I've sworn at him, told him to go away, get out of my life, thrown him away from my door and the rest. I'm a sinner who falls short of the glory of God.

Every now and then God will send him to me at 2am in the morning to shout "I'm cold" up at my window. Sometimes I respond and at such time I win merit, at other times, to my shame, I do not. Sometimes I do that which I should and sometimes I see the good that I should do and do not do it.

"Exhibit A, your honour - so incredibly irritating!"

Please note, Mr Gardner: Jason was on this occasion thrown out of St Bartholomew's not because he was quietly saying the Rosary, but because he was going around irritating people in the Church. I know this because I asked people in the Church after I did the interview. After setting his own head on fire in this Church while lighting a candle for a dead friend, I believe he was banned from this Church. Because of his unruly behaviour and manner, the Church of Christ the King do not allow him in to their meals on a Monday evening, instead giving him some food at the door. Despite disturbing St Mary Magdalen's sacred liturgy on several occasions, he is still allowed in the Catholic Church of which Fr Ray Blake is parish priest.

This man has also been sent by God to chastise Brighton, since it revels in vice, hedonism and immorality, He sends a poor little one who does the same as other Brighton hedonists who are protected by their wealth, to show Brighton the natural result when this lifestyle is embraced and to reveal the double-standards and hypocrisy of the wicked, since when the rich embrace a life of vice and endless pleasure for its own sake, they are lauded, but when the poor man does the same he is crucified, mocked, derided and cast out by the wicked. All the while his cause is with the Lord, Who is Just as He is merciful, whereas the lot of the wicked is destruction.

None of this alters the fact that he is an irritating little ******d. You don't get an ASBO like this without being so.

And yet, despite this, Jason Evans has never trashed the reputation of those who help him, love him, provide for him, shelter him, clothe him, feed him and give him money, often against their better instincts. Defamation, slander, malice, wicked speech are all far from him. He makes his money from begging, not ruining the reputations of others! Messy, lying little irritating little ******d. Anyway, enough about Bill Gardner!


Only unscrupulous journalists take pleasure in malicious slander, gossip and defamation of the character of those who take pity on the poor. Only unscrupulous journalists will write any destructive, sensationalist rubbish in order to denigrate the reputation of others while making a fast buck, in the vain and ambitious hope it might get them into a daily national newspaper. Mr Gardner's ruthless ambition, slackness in getting the full story and his lack of journalistic integrity, which should always be grounded in getting to the truth of a matter will not go in his favour.

Sadly for him, when the dust settles on this, and national newspaper editors look up Bill Gardner on Google, they'll see my blog and a host of others detailing why his brand is now, or should be, toxic. The cause of the just is with the Lord, Who never fails them, Who has the power to turn even the evil that happens to their good. Even bad journalists are sent to try us.

The wicked are ruined by their own sin. What they prized and treasured becomes their downfall. The just man is remembered for the good and charity he has done. The wicked are blotted out from the memory of men, their names forgotten, their treacherous words and deeds going with them to the grave, and having found no rest in this life in their insatiable pursuit of money, power and worldly gain, so too, in the life to come there is no rest, for there can be no rest for the wicked. Their arrows and attacks on the just come to naught, they are confounded, for the cause of the just man is with the Lord, whereas theirs is not, since they never thought to call upon Him.

Do not give up, Fr Blake. Keep hope and trust for your cause is with the Lord. Jason isn't allowed within 5 yards of a cash point. Bill Gardner failed to mention that, perhaps not knowing of whom you were talking. Bill Gardner shouldn't be allowed within 5 yards of a newspaper - local or national! As a journalist he failed abysmally because he didn't want the full story - just a bit of juicy, sensationalist soundbite that he could spin around in order to make you look bad or uncaring or un-Christian. He has no love for the truth - an unhelpful habit if one really wants to be a serious journalist.

A few years ago, Jason stole an engagement ring from my car when I allowed him to sleep there for a while. He pawned it and sold it for smack having discovered it in the glove compartment. Thieving little ******d. He denied it at first but came clean in the end. I'm still thinking about who to have as best man at my wedding to my fiancee next Spring...I think I've made my choice.

He lost his brother at Hillsborough.

At least...That's what he told me.

Enjoy your success while you have it.

Can I be your best man?

I also remember one incident of said irritating little bastard and his friend being arrested by a member of our illustrious police force for disrupting the Holy Mass, generally disturbing the people and being a major pain in the neck.

Sussex Police never questioned the arrest, so Bill Gardner, YOU TRY IT.

But I thought that nice Anglican vicar in Bill's piece said everyone was welcome at his church.... Hmmm...

Is there anyone in Fr Blake's parish up for organising a boycot of the Argus? That 's what Liverpool did to the Sun after their scurrilous remarks about the Hillsborough disaster and that newspaper still has no traction in the city.