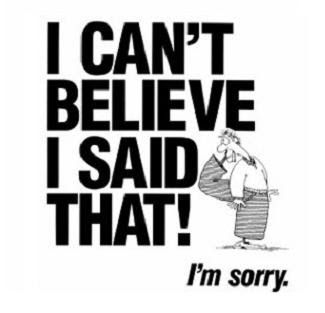 I have taken down a post I wrote yesterday which I wrote in a pique of over-excitement.

I said that I had produced a new magazine for Brighton called The Eye of a Needle in which to defend the poor and that I wished to produce a number of them for distribution in Brighton.

I have, for a long time wanted to see a new magazine in the area and had been working on one that would put homelessness issues at the forefront of a new local paper.

In this instance, I wished to use the magazine to defend the name of Fr Ray Blake after a truly terrible article by Bill Gardner, since this priest does much for Brighton's poor and to see his name be tarnished merited some response from the Catholic community in Brighton, among whom are many who feed the poor. 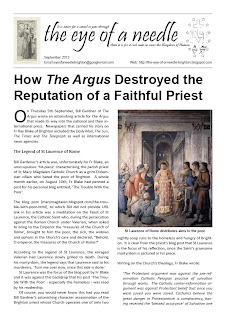 This was an idea that came solely from me as a parishioner of Fr Blake's Church and it was not an idea in which Fr Blake had input.

Foolishly and outrageously, I advised readers to send cheques or to donate to St Mary Magdalen Church, giving readers the impression that the Church itself had a funding role to play in this initiative.

I unreservedly apologise to Fr Blake, to the parishioners of his Church and to his Bishop for suggesting such an action to readers of this blog and I beg their pardon.

I should have asked readers to donate to me personally if I had wanted to produce such a magazine, rather than seek a Catholic Church's approval and involvement in the project without seeking the support first of the priest and his parishioners.

Presumptuously and with a reckless lack of regard for the reputation of both the priest and the parish, I asked readers to do this, when, in fact, as a parishioner I have no authority or right whatsoever to make such a request.

For this, and for giving the public impression that Fr Blake or St Mary Magdalen Church was somehow linked or involved with the project, The Eye of a Needle I apologise.

I ask for forgiveness for my transgression from my priest, from his parishioners and from anyone who may be offended by the presumptuous nature of my action.

In a keen desire to see the restoration of Fr Blake's reputation and for justice to be done in his regard, I advised action that was never within my competence or authority to advise and, had I wanted such an initiative to be funded through his parish, I should have sought the advice and blessing of my priest, something I lamentably failed to do.

May God forgive me and grant to me a measure of wisdom and prudence that I may not so offend Him again.

Dear Laurence, in my opinion you have done enough to defend the honour and reputation of Father Blake. I think you can becalmed leave the rest to God who has alway stepped in when He thought it is the right time to end the trial.

Well, it was a jolly good idea, so I hope you can find the wherewithal to do it!

If we do a fraction of the good that you do with your blog and your support for the Church and for Fr Blake, then we will have done well. I must say that I did not read into your last post the negative points that you raise and have humbly apologised for,nevertheless kudos to you. Keep up the good work, and God bless.

Gosh, more than I have got from the Argus so far.
The Eye of the Needle project, defending the poor and homeless is very worthwhile, the Argus stir up so much against them, they need a Christian voice advocating their cause.
I am sure some funding can be found but not from our parish, we don't have funds for lobbying.
I rather like the idea of something going out to the newsagents in Brighton, most of whom are Christian Copts.

Yes, I see the delicacy of the matter. I must admit I did wonder about the "churchiness" of it and how it would differ from something like The Catholic Herald, a diocesan pamphlet, or even The Big Issue or The Insight, which do focus on other social issues outside the mainstream local press.

But you meant well.

Blogging/personal commentary & opinion is one thing but once you start circulating a printed publication, you have a legal obligation to adhere to the Editorial Code of Practice yourself, and if you don't, you could potentially get into some very sticky situations if you don't have a lawyer on your team. Most lawyers don't work for nothing, although some do pro bono, it might be hard to find a lawyer willing to risk his professional reputation in the media unless he's on very solid editorial ground.

It would also be rather odd to try and get private individuals to fund you. The usual recourse for funding is through advertising - local businesses & services who might think you have a wide enough readership to merit their investment. To know who your potential target readers are, you'd have to do market research first. Questionnaires, surveys, stats, pie charts! Yawnsome but how else do you convince a local business (or bank) to give you money for your project?

Then there are serious business matters like tax, setting up a limited company, a board of directors, budgeting production costs, qualified staff, company accounts, etc. Otherwise it risks being just another "student rag", printed cheaply (and badly) on a home computer, of the kind you can find in cafes all over B&H, which people don't really take seriously because they are not considered legit publications.

I do think there is scope for a new magazine in Brighton that provides a truly unique, critical voice, but the trouble with the unique is that not many people are interested in it. Humans are conformist by nature; we like to be members of specific herds or tribes.

I'm not saying give up the idea, but do look into all the aspects of it more deeply.

Also, drop the "eye of a". It's cumbersome and the scriptural reference will be lost on the masses, if it doesn't deter them. How about just simply "The Needle"?
(pun on the verb)

We still love your written work, Bones. Keep at it.