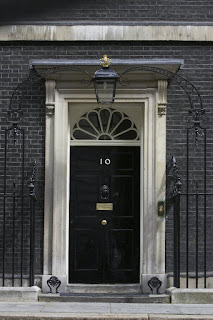 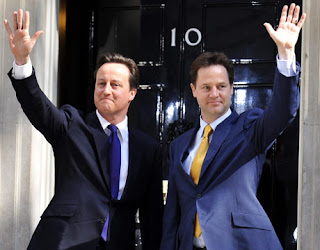 The word 'shambles' doesn't do the situation justice. Clearly, Nick Clegg was about as popular with the electorate as lions were with Early Christians in Nero's Rome, yet he is Deputy PM and his henchmen have been invited to join the Cabinet.

It isn't just the Conservative Party who won't like what Cameron has just done. I expect a lot of people have been watching events unfold at home while thinking...Hang on! What's that election loser doing in Government?

Just looking at the figures on the paper, shouldn't the two parties who won the biggest proportion of the popular vote share power? I mean, if this was the Olympics, the man in bronze might as well just kick the man who won silver in the gonads and stand on his pedestal while listening to the national anthem. Bizarre. This will be a very weak Government at a time of economic crisis, which, history tells us, is something of a recipe for disaster.

Thank God Dr Evan Harris lost his seat is all I can say, otherwise, no doubt, the passionate abortionist and advocate of euthanasia would be sitting around the Cabinet table today exchanging pleasantries with Cameron! Also, if you look at the picture of No.10 Downing Street on the left, you will notice there is no disabled access there either. Shocking.
at May 12, 2010

The office of deputy prime minister can be used to good effect to park someone who wishes to feel that they have lots of power but in fact have little. It's a sort of "minister without portfolio" in many ways. Remember Prescott? His office did waste quite a bit of money, I suppose, but relative to the size of the rest of government, the harm was limited.

The one thing sure about this marriage is that it will end in a very nasty divorce.

I would recommend that Bishop Richard Moth, Bishop of the Forces, respected Canon Lawyer deals with the annulment

To be fair, if you count votes, not seats it was a much closer contest than the composition of the House of Commons would suggest.

Actually Downing Street does have disabled access although it is a side entrance. It is not possible to make alterations to the front of the building since it is a historical building and permission would be required. The Disability Discrimination Act does not require front door access just access. The situation is understandably different for new buildings.

You are all so cynical! Most of us have been complaining for years about the political set-up and the way they all hate each other's guts. Maybe, just maybe, this could be a genuine atttempt to change things a little, to try a different way. I suggest that instead of being so ready to criticise you should all get down on your knees and pray that the new government actually manages to sort out some of the difficult problems this country faces. They sure will need your prayers!

I think the numbers at the start of your post are wrong. If Cameron had 350 seats he would have a majority, as there are 650 seats it total. Agree with most of what you say, but if we had a PR system, Lib Dems would have 150 seats, not 50.

So you are advocating a Labour-Conservative coalition?

Who stopped them from forming one?