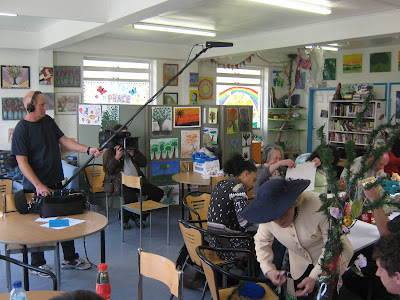 Last week Channel 4 were at the BUCFP, Brighton's centre for the unemployed. They told the centre that they were filming for a documentary about the recession.

So, they did some filming and covered the 'story' of a man called Brad, a man living in a camper van on the seafront, who was fed by the St Mary Magdalen Soup Run. To the right is a picture of them filming during an art group.

Or at least that was what the BUCFP were led to believe. It turned out at the end of the week that Channel 4 were, in fact, filming an episode of 'The Secret Millionaire'. There were tears of joy from committed volunteers in the centre when the 'secret millionaire', who had left some in the centre feeling 'conned' because they thought they were meeting a man down on his luck everyday during filming, handed over a cheque to the centre for £25,000.

I asked one of the Channel 4 team of freelancers whether I could have a picture of 'Brad' for the centre magazine. I have since had an email back saying that they don't want any publicity about this to get out into the open (how many people can the unemployed centre's magazine reach with a print run of 400?), so 'no', I can't have a picture of him or a quote from him or the Channel 4 team.

So, in light of the fact that Channel 4 have so brazenly accepted blood money in showing an abortion advert for Marie Stopes, I thought I'd simply do my journalistic duty and cover the story. Hopefully, The Argus will pick up on it. I'll send them a copy of this post now.

So, just to recap, then. This is a local 'exclusive'. The BUCFP received £25,000 from a 'secret millionaire', Brad, following a week of filming in which the centre were led to believe he was a beggar living on the seafront. He made his fortune in the care industry. He saw the work that the BUCFP do and liked what he saw so he gave them money. I believe he was fed by the Soup Run. Unfortunately, Karla and her team of committed volunteers were not on the receiving end of his generosity and the Soup Run did not receive a cheque.

I personally commended Brad on his generosity and asked him if he'd like to meet my friend with nearly no teeth, as he really needs implants. He replied, "Oh, yes, that's awful. My nephew suffered the same problem. No. Sorry. Go well."

I suppose that 'The Secret Millionaire' would lose its sense of drama if they were honest to the volunteers of centres that provide assistance and relief to the poor, but that didn't stop some in the centre from feeling very deceived by Channel 4 and the rich man slumming it on the seafront so that he could egotistically hand over a load of money and be filmed doing it.

Don't worry Channel 4, I only get between 400-500 hits on this blog a day, but I hope the local newspaper blow your cover, only because you didn't want any publicity of this exciting story for the BUCFP to get into the magazine ran by unemployed volunteers...and accepted money from Marie Stopes International to promote abortion to pregnant women and girls.

How terrible it is that you are more protective of your documentaries than you are of the unborn and vulnerable teenagers.
at May 21, 2010

If you have ever watched this programme you would know that the format is that the 'secret millionaire' makes several visits in cognito to local charirities and people in need. The finale is that the secret millionaire then has to decide who to allocate his money to. It's entirely understandable that the production company don't want the result published before the programme is broadcast otherwise it would defeat the purpose and there would be no suspense or surprise. The programme is their intellectual property so they have the leagl right to determine these factors.

Lawrence, you may consider yourself to be a 'journalist' but really you're just a guy with a blog. You've written a few ten penny bit pieces for a homeless magazine but that doesn't really make you a journalist. According to your definition, I too would be a 'journalist' (as well, as most people) since I've written small pieces for an in-house mag. I'm not surprised they don't want to assist you writing anything at this stage. I imagine they would have no objection of something being written if it waited until the programme is broadcast. As the project has just been handed £25,000, I think you're being a little churlish. Talk about moaning when you've just been handed a windfall.

Finally, I very much doubt this programme was made by Channel 4. It would have been commissioned using an independent production company. Likewise, Channel 4 did not allow or seek to broadcast the abortion ad last night. They are legally obliged to broadcast any ad which has been passed by the independent censors. In both cases, your beef isn't with Channel4 - it's with seperate companies/quangos in the background. Try and get your facts straight, it's a basic journalistic necessity dude!

Yes, I met them, the filmcrew were working for Channel 4. Sure, they were freelancers, but there we go.

I am a trained journalist. I have my own magazine online and you yourself have written to the letters page. I have a readership, albeit small.

I may not get paid for my vocation, but, then again, give me time.

All I'm saying is that people at the top felt deceived by the programme makers and some expressed anger.

Please also note that I mentioned The Argus might be interested in the story. They are REAL local journalists, remember...