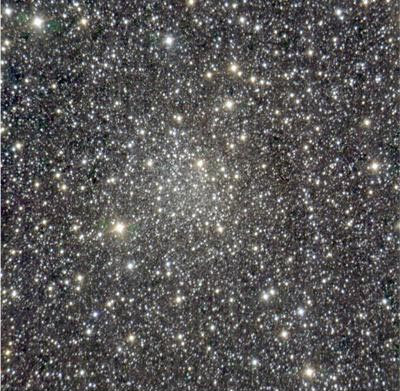 ...and so, it seems, is my ability to consume all types of 'Boxing Day' booze.

Just before Christmas I was having conversations with my band about the Universe, thinking to myself and saying to them: "Well, how big is the Universe? If the Universe is this round table, then what is on the other side of the ledge? If you had a spaceship and flew it as far as you could from the centre of the table, how far could you go and would you ever hit a 'wall'? What is on the other side of the 'wall'?" None of us had the answer as you can imagine! But if you believe in God you do start to marvel at His Creation a little every now and then and think, 'How on earth did all this happen and where does His Creation end!?'

We look at the stars, we stare out to space and we wonder, 'How far does it go?' I suppose what I was saying was, does the created Universe have an end and if it has an end, where does it end, and if it ends, what is there and if nothing is there, what is nothing in comparison to something? The main driving force of what I am saying is that, for all we know it could be infinite.

I read an excerpt from a CTS booklet on St John of the Cross recently which really struck me. Then I have read recently a few quotes by Saints on love which have struck me again and again. The Saints in question were basically saying in a nutshell that God's love is infinite, therefore whatever we think we possess in terms of love is finite, because it is conditional, because we are human and frail. Yet, because we are adopted sons and daughters of God, the capacity to love is infinite. It is never a case of, 'job's a good 'un'. For our task of Love is never complete! It never can be as long as we are on this earth! What we do on earth, what love we have, is always incomplete, for we are not wholly united to God in Heaven and see not yet the Beatific Vision.

The gist of it is that because we are human our love is weak, can never be as God's love, nothing so pure, nothing so forgiving and nothing so holy, yet because we are asking for God's Grace, to be channels of His peace, we are still instruments of His love. Yet, through prayer the Saints realised that because God's love is Infinite, an unending expanse of Divine Love, then so too, our potential and our capability to love is Infinite.

For according to the teaching of Holy Mother Church, we are made in His image and likeness! And this is what kept mystical Saints going! As St Paul said, "For now we see through a glass, darkly; but then face to face: now I know in part; but then shall I know even as also I am known."

If the created Universe is infinite, then it would be fitting in terms of man's relationship with the Creator, because for us who have been created also, the Uncreated One, the Creator, is Infinite. Love Itself is Infinite!

How do we know that Love is infinite? How?

Why because of Christmas Day!

Brothers and sisters, the Incarnation and the Virgin Birth of our Blessed Lord Jesus Christ shows us that we, who are but a pin prick of God's Creation (and the Earth itself is but a pin prick of God's Creation) have been graced by the Creator of all, the Maker of the entire Universe: God, in the Person of our Lord Jesus Christ, Who has chosen to dwell among us at a point in human history! Us! We who were and are but a miniscule portion of Creation! We who would be an easily forgotten fragment of what God has created, were God not Love Itself, have been graced by the Presence of the Uncreated, 'Begotten, not made', God! Yes! God did not forget us and God has not forgotten us still! The Maker of all has become Man, and not just Man, but a tiny Baby and from conception to death led a human existence, identifying Himself with and joining Himself to, us!

Is there anything more that God could have done? No! The Incarnation alone would prove that God's love for Man was infinite. But that is not all! How then do we also know that the Love of God and God's love, is infinite? Not only has the Maker of all that exists been born on Earth, in the poverty of the stable, but He has lived a human life, suffered and died for our sakes, on account of our sins!

How do we also know that the Love of God and God's love, is infinite? Not only has the Maker of all that exists been born on Earth, in the poverty of the stable, has lived, suffered and died for our sakes, on account of our sins, but He has established His Holy Catholic Church, whereby mankind has recourse to the Infinite Love and Mercy of God!

How do we also know that the Love of God and God's love, is infinite? Not only has the Maker of all that exists been born on Earth, in the poverty of the stable, lived, suffered and died for our sakes, on account of our sins, has established His Holy Catholic Church, whereby mankind has recourse to the Infinite Love and Mercy of God, but He has instituted the Sacraments of Grace, of Baptism, making us His adopted sons and daughters, and of Reconcilliation, whereby all mankind could receive the Absolution of our sins by Confession!

How then do we also know that the Love of God, God's love, is infinite? Not only has the Maker of all that exists been born on Earth, in the poverty of the stable, lived, suffered and died for our sakes, on account of our sins, established His Holy Catholic Church, whereby mankind has recourse to the Infinite Love and Mercy of God, instituted the Sacraments of Baptism and Reconciliation, but He also has left us Himself at the behest of the Priest, under the guise of Bread and Wine, to dwell within our very souls, so dear to Him that we are!

Out of all of His vast Creation, He wants to dwell in the souls of men and women, to heal us, cleanse us, purify us and aid us in being like Him in love, because we alone in the Universe are made in His image and likeness! Out of all of Creation, that is the dignity He to which He has raised us! Ultimately, His Birth signals not just God's solidarity with us, but His desire to be with us, from within! This is through the Holy Eucharist! Out of all Creation, God has been born, lived, died, raised and has ascended to Heaven for the chief purpose of being in me, in you and in every man, woman and child on Earth. When we go to Holy Communion, we receive God Himself! The God whose home is Heaven, the God whose home became the womb of the Virgin, the God whose home became the stable in Bethlehem, and later Nazareth, now wants to make a home in our hearts and souls! How much more could God love us? I tell you that He could not love us any more! There is no wall!

And that is why I have already, even though it is only St Stephen's Day, removed all the Christmas cards which I have received which did not bear an image of our Maker and Redeemer or a sign of such from my room. It is not because I do not see them as signs of affection or love, for they are. But they do not do the Holy Feast of Christmas justice! For on Christmas Day we recall that God, Maker of all, deigned to be born in the poverty of the stable. The cards which remain bear witness to the Incarnation, Birth or Glory of God in His Angels and Saints, witness to the God born for us, us whom God could so easily have forgotten and left to death in the depths of space and time. The very least we can do, as human beings, who have been made in His image and likeness to love Him and serve Him, is to honour Him!
at December 27, 2008