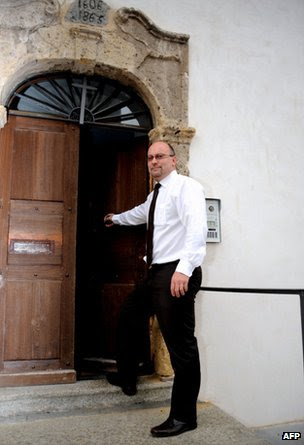 'A Roman Catholic parish priest at an elite French ski resort has been stripped of his Church functions for refusing to renounce Freemasonry.

Father Pascal Vesin was ordered by his bishop to cease his work in the Alpine resort of Megeve, the parish said. Bishop Yves Boivineau had warned Fr Vesin about his "active membership" of the Grand Orient de France lodge. Freemasonry has been condemned as anti-Christian and anti-clerical by various popes through history.

Bishop Boivineau ordered the priest to cease his functions "at Rome's request", the parish said. In March, the Vatican's Congregation for the Doctrine of the Faith - effectively the Church's watchdog - asked for the priest's departure.

Three members of the diocese of Annecy then met him but Fr Vesin said he would not leave the lodge. A statement from the diocese quoted by Le Figaro newspaper stressed that the penalty imposed on the Freemason priest was not final and could yet be lifted because "mercy goes hand in hand with truth".

Fr Vesin has been parish priest of Sainte-Anne d'Arly Montjoie in Megeve since 2004, according to another French newspaper, Le Messager. In an interview in January, he set out liberal views of the Church's role. He said he favoured allowing some priests to marry and said he had refused to endorse a demonstration against same-sex marriage in Paris. Conspiracy theories and controversy have dogged the Freemasons throughout their existence, fuelled by their secretive image, though for some they are just a gentleman's club devoted to charitable giving.'


Deo gratias. Fantastic. Now for the purge in Rome?

This seems like a step in the right direction. The Priest was made to choose and sadly his Priesthood lost.

However there is still controversy and on one French Catholic forum there is a discussion as to whether the new head of the French Bishops Conference is or is not a freemason. A definitive answer seems impossible to find.

As the freemasons are not allowed to admit to membership perhaps we shall never know. One comment on the forum quoted a Grand Master in 1987 as saying that 67 of the French Bishops were freemasons. As that was some 25 years ago one can presume that this figure is no longer applicable. (Cue conspiracy theory here as I read that this Grand Master died shortly after in an 'accident.')

Another comment states that members have to trample on a picture of Our Lord. If this were true how on earth could a Bishop, Priest or indeed any Christian become a member?

I was brought up being told that freemasons were a kind of professional men's club like Rotary who did charitable deeds and helped each other get on in the world and that their strange rituals merely strengthened their bond of friendship.

As this priest has now been relieved of his duties although I understand he is still a Priest, perhaps there is more to freemasonary than a simple club?

I'm not into this conspiracy stuff to be honest but I was looking at David Icke's website last night just to see what had happened to him and noticed a reference to the 'Bilderberg Fringe Festival' where he and Alex Jones will be speaking. So it seems Alex Jones will be there after all:

Great news. "At Rome's request" made my day.

It appears that this particular Priest has been a member of the Grand Orient since 2001. I understand that the Vatican moves slowly even in this era of instant communication. I seem to remember Fr Z writing that they updated their technical hardware every 75 years whether it was needed or not!

There is a newspaper interview with this Priest done in January on line and it shows that he has some controversial ideas regarding the Faith. He also mentions that he refused to put up information about the huge demo in Paris which took place in January.

In this era of Priest shortage it is sad to learn that there are Priests whose orthodoxy is questionable. No wonder their flocks are confused.