Who Lit the Blue Touch Paper?


The Vatican has today released stunning photography of the moment of the Big Bang, a theory expounded by irreligious and religious folk alike to offer an explanation of the origins of the Universe. Catholic commentators, taken somewhat aback by the papal endorsement of the Big Bang and evolutionary theories are today looking over one of the most controversial photographs released by the Vatican in Church history.

The stunning image shows the reigning Supreme Pontiff present at the moment of the huge explosion, the precise date of which is awfully difficult for historians to pin down. Some have been asking whether the image shows the Vicar of Christ actually doing the lighting of the blue touch paper, but the Vatican has assured Catholics through spokesperson Fr Frederico Lombardi, that it is clear there is no lighter in Pope Francis's hand, therefore, "while it cannot be ruled out that Pope Francis lit the blue touch paper, it cannot be said that he did."

Asked whether the image contradicts the teaching of Francis's predecessors, Fr Frederico Lombardi explained that the photograph should simply be enough to silence Francis's critics in the wake of his ringing endorsement of the Big Bang Theory, who said such things as, "How on earth do you know? Were you there or something?" Fr Lombardi said speculation to that effect can now be put to rest.

Meanwhile, some Catholic commentators are suggesting that Papal endorsement of the Big Bang and Evolution have huge implications for the Catholic Faith because of the effect that these philosophical positions have on those at the top of the Church.

"For example", said one commentator, "it is clear that the violent and explosive nature of the Big Bang theory could be used to justify such actions as the production of a mid-Synod relatio that simply exploded out of nowhere into the World's media despite not reflecting effectively the real views expressed at the gathering of Bishops and Cardinals. Isn't that what happened? The relatio just seemed to explode violently and without warning? What did it leave? Total and utter chaos? I don't believe His Holiness was present at the dawn of Creation but I do believe it is possible he lit the blue touch paper for the Synod. Perhaps His Holiness can bring Order out of the Chaos in the Church, but this contrasts with the Genesis account of Creation which suggests the Lord spoke everything into being. Before the Fall at least, when all in the Universe is suggested to be in total harmony with the Creator, there is no need for a Catholic to believe that God required any chaos or explosion at all. No explosion was necessary for Jesus Christ to be risen from the Dead or for the Word to become flesh in the womb of the Blessed Virgin. I could go on, but let's leave it there."


Other commentators have noted how convenient it would be for a Pope to believe and teach others to believe the theory of evolution. "It's so obvious isn't it? If species evolve and humans have evolved and/or are still evolving, doctrine can evolve as well, can't it? If through time and history, mankind is progressing onwards to a higher state of being, from bacteria, to fish, to mammals to humans and our evolution as a species is not yet complete, then it can be argued by the person who does not really accept the Divinity of Christ, that doctrine, even Dominical doctrine, is imperfect until it is adapted or evolves in line with a human race destined for a higher state of consciousness by virtue of the evolutionary principle. Call me paranoid if you want but it is all rather convenient for the reformers, isn't it? 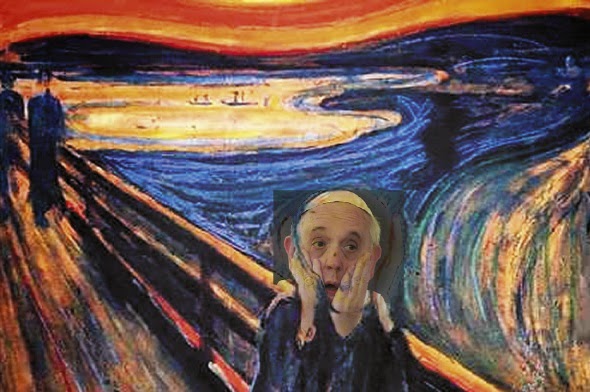 Yes. The Big Bang and Evolution. We shouldn't be surprised the Holy Father is into these two things. His pontificate is marked heavily by a persistent belief in both. Oh and while we're on the subject of evolution, Christ's promise to return at His Glorious Second Coming is promised to involve some kind of 're-creation' of the cosmos.

Will that re-creation be with a bang, will that involve evolution, or will God simply speak it into being? When the Heavenly City comes down from Heaven that will be evolution, will it? Just asking. At the Resurrection the long-since decomposed will rise again in the flesh. Will that be in an 'evolutionary way'? Or will the Lord just command it and it shall happen? Just asking. Surely all of us, the Pope included, should be preparing ourselves for that Day, when even the sea shall give up its dead because on that Great Day, everything will be made new. Indeed, we can say with His Holiness, "Don't be afraid of newness!"
at October 30, 2014

Laurence,
Your speculation and investigative inquiry in this post could, in due course of time, lead to the formulation of a Theory as good or as bad, relatively speaking, as any other Theory of creation.

Pius XII stated that the “evolutionary” theory that man was created from pre-existing matter, was not incompatible with the Faith; but that we must believe that the first soul was directly created by God out of nothing and that God exercised a “special providence” over the process that led to the creation of man’s body, so that the first man was not literally generated by a brute beast. The rest, we dunno. Some things do however evolve legitimately – the liturgy for example, which evolved into the form codified in 1570 - and which has now evolved into something different.

Cathprog he went a bit further, saying that we had two first parents, and their souls came from God directly, not from matter. Polygenism cannot be accepted, nor is there any evidence for it, i.e., human beings sprouting up all over the place randomly.

I wish Francis would just be quiet. He needs to stop treating the papacy as a megaphone for Jorge's 70s-inspired and dated opinions on everything. And for God's sake can he wear his robes a little better. They look like polyester and yellow on him.

Thanks, JB, good point. And the derivation in some way of the first woman from the first man, Eve taken from the rib of Adam as it were, is part of that teaching.

The Big Bang Theory was introduced into the world by the Jesuit Lemaitre, a Catholic priest. It is nonsensical, illogical and an insult to God. All the Early Church Fathers believed in a geocentric universe and that the world was created in 6 days. Galileo was condemned by the Pope in the early 17th century for his espousal of the heliocentric universe. And it has never been rescinded, despite the waverings of JPII, BXVI and the ill-educated rantings of Francis. For more than 1500 years from the Fathers, through to the Medievals the Church has believed that Genesis is correct, and that the earth stands at the centre of the universe.
Read Dr. Sungenis Book Galileo Was Wrong The Church Was Right www. galileowaswrong.com and rediscover the truth. There has never been any scientific experiment to confirm a heliocentric universe for what works for heliocentrism, also works for geocentrism. Even Einstein was forced to admit that the statement "The earth is at rest and sun and stars move around or the sun is at rest and the earth moves" are equally correct. It is for philosophical reasons that he chose a heliocentric explanation. The latest Plank experiments have come back to haunt Copernicus and Galileo. The Cosmic Microwave Background evidence of the universe points to our earth. Oh dear, maybe science will have to swallow some pride, for the evidence points to a non-revolving central earth in the cosmos, as the Church has at least for 1800 years always believed. Can proud man and the high priests of scientism accept that? What a challenge! For if they do, then they will have to bow down to the Someone who put it there. We call Him God. The likelihood is that they will pronounce the absurdity of a multi-universe theory.

Interestingly enough Benedict XVI said that it was precisely because of the Galileo case that the Second Vatican Council was called, implying that the Church had got it wrong and that the Church needed to come to terms with the world. No Holy Father and all ye of little faith, the Church was not wrong and there was no need for your Council. Will he have the humility to denounce it?

There can be no more Traditional Catholic doctrine than that of a non-revolving world set in the middle of the universe where God put it. We are told that the Bible is the inerrant Word of God. Then have faith and trust what Holy Mother Church has always taught.

36. For these reasons the Teaching Authority of the Church does not forbid that, in conformity with the present state of human sciences and sacred theology, research and discussions, on the part of men experienced in both fields, take place with regard to the doctrine of evolution, in as far as it inquires into the origin of the human body as coming from pre-existent and living matter - for the Catholic faith obliges us to hold that souls are immediately created by God. However, this must be done in such a way that the reasons for both opinions, that is, those favorable and those unfavorable to evolution, be weighed and judged with the necessary seriousness, moderation and measure, and provided that all are prepared to submit to the judgment of the Church, to whom Christ has given the mission of interpreting authentically the Sacred Scriptures and of defending the dogmas of faith.[11]

Robert Sungenis's 3 volume work, Gallileo Was Wrong, The Church Was Right is a very good comprehensive account of the modern science experimentation and data regarding the Earth and its place in the Universe. V enlightening.

Everything he does is intentional, including looking as unkempt as possible when wearing the papal cassock. It seems to be that he wears black under the white, making it look awful. Lord, have mercy.

@Bryan Dunne. Don't know what you are trying to say as Pius
XII says nothing there that contradicts Church teaching on the matter. Just as Galileo was given free reign to do exactly the same. But he sought to denigrate the teaching of the Church. The theory of heliocentrism was condemned by the pope as heresy, and the Holy Ghost hasn't allowed Church teaching to change. That judgment has never been rescinded. Note also that Galileo recanted his theory before he died. Deo Gratias. Paul