Benedict XVI had certain themes and motifs that he kept coming back to concerning the sacrality of the liturgy and worship, the Person of Jesus Christ, charity and truth. Much of what the mass media has told us about Pope Francis has been conveying message through image - embracing the outcast - in a message that says 'preach the Gospel at all times, if necessary use words'. In terms of words - and there are quite a few of them in the Message for the World Day of Peace today - a theme that it appears is close to the heart of the Holy Father is 'fraternity'.

When I hear the insistence on themes of 'mercy' and 'fraternity' from His Holiness, I keep getting images of depressed, downcast and perhaps at times abject Franciscan Friars of the Immaculate in my mind, but I will try to put these thoughts to the back of my mind. His Holiness's words today did however convict me of personal sin. I had a homeless friend who came to Mass this morning back to watch King Arthur and several episodes of Frasier. He's a quiet, unassuming and gentle soul and he's glad that he managed to get onto the nightshelter project in Brighton.

I do recommend that episode. Very funny (even if it does have a theme of divorce). At some point after watching the movie, Jason and his friend Peter came and rang at the door and I had Jason and Peter in for a cup of tea. Peter is another quiet, unassuming, gentle soul. However, Jason is not quiet or unassuming or gentle. Having invited Jason and Peter in for a cup of tea, Jason came in and was like a bull in a china shop. He was very loud, opened my fridge to examine the contents and helped himself to my razor without asking and had a shave. Jason committed gross sins against etiquette.

While he shaved, he was shouting and arguing with his friend. I lost track of the amount of times I asked him and then told him to be quiet, calm down or eventually 'Shut up!' Feeling sorry for my original guest that I had allowed Jason in to disrupt a peaceful environment, I totally lost my patience with Jason and asked him to leave, if nothing else, because it was becoming obvious that my friend I had originally invited in found him disturbing. Before Jason arrived on the scene, all was peaceful. Still, I ended up for a moment manhandling Jason because he was so disruptive to the peace of the house because he was being so loud and so irritating. Reading the Holy Father's message today reminded me of my need for patience and charity.

Why am I saying this? Well, the point is that I might very well have felt justified in 'getting rid' of Jason in order to establish peace in the house, but peace is never won by acts of war or aggression. Such is a false peace. It probably would have been a good time to whip out some Rosaries and ask these chaps whether they wanted to pray a decade to Our Lady.

What I am struggling with (as well as battling my vices with virtue and failing often miserably) is understanding the Pope's message on 'fraternity'. My sin was not contrary to fraternity, but to charity. My offense is against love, against charity, and therefore against God Who Is Charity.

I am also confused by the 'spirit of fraternity' discussed by the Supreme Pontiff. I understand that in Christ Jesus we are brothers, but we are made brothers and sisters by the spirit of Christ. The Holy Spirit, rather, is that which has been poured into our hearts and this is the Spirit of love, of charity that establishes and strengthens bonds of peace and mutual understanding between us. Fraternity means 'brotherhood', but brotherhood is a bond between persons. It is the bond itself. It is not a spirit. I sound like a pedant, but 'brotherhood' itself is seen in the effects of the bonds between persons built on love or a reality between persons established by virtue of being all made by the loving Father of mankind.


Fraternal love, brotherly love, is a virtue, and we can say there is a spirit of brotherly love, but it is love - it is charity - that makes fraternity something of value. Fraternity itself is vacuous and empty unless charity, love, penetrates into all the relationships in those persons making up the family or society or 'brotherhood'. Likewise, family is a good thing, but family without love destroys these bonds. Brotherhood is something fostered by charity, rooted in unity in Christ Jesus. Solidarity and fraternity - I would say these are good things sorely needed in a world in which the 'culture of indifference' reigns, but these things are destroyed or damaged by sin and even blood brothers do not really sin against primarily brotherhood if they fight - they sin primarily against charity or betray one another thereby sinning against both charity and truth. All sin is offensive to God. The 'culture of indifference' is the culture of sin - a 'culture of death' caused by our sins. It is sin and a lack of charity that leads to indifference.

I suppose I am being 'nit-picking', but I am a little taken aback by the quite radical change in language we are seeing with Pope Francis. Traditionally speaking, when we sin, we sin against God, against our neighbour and in particular we commit sin against virtues such as charity, chastity, hope, temperance, fortitude etc.

Our vices run contrary to their opposite virtues for which we should be striving. Yet 'solidarity, fraternity and brotherhood' all seem to me to be good things, good effects of virtuous life that rejects vice - of pure love that rejects sin - of the virtuous man that hates evil, refuses it and chooses the good. I have never, nor will I ever pray for 'solidarity, fraternity and brotherhood'. I will pray for faith, hope and in particular, the charity that fosters these things for the sake of my salvation and that of others.

Therefore, I thank His Holiness for pricking my conscience and I shall certainly seek God's mercy for my behaviour today, but I am still trying to get to grips with the real change in language which we are experiencing in the papacy. I am all for 'solidarity and fraternity' with Jason, but my own sin, my own personal sin, my own lack of virtue so often gets in the way. In order to establish a more peaceful relationship with Jason and others, I need to repent of my sin and grow in love. To grow in holiness and charity requires repentance and prayer that will open my heart more to the Spirit of charity that comes from a relationship with the Father, through the Son, in the power of the Holy Spirit. Put simply, fraternity will not make me holy, but if I humbly ask, Our Lord Jesus Christ will. 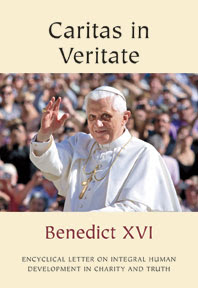 I would strongly contend, nay insist, that it is entirely plausible that the 'spirit of fraternity' or even 'fraternity' may as well exist as concept alone, without the charity that makes that fraternity sweet and holy. Fraternity is something fostered by the spirit of love, the spirit of charity and truth. I might add that sin against charity often takes place, as it did on this occasion, when the powerful lord it over the weak and defenceless, making 'solidarity' and 'fraternity' impossible. I would suggest, too, that this is exactly what the Franciscans of the Immaculate are currently experiencing.


Off topic, but bizarrely, I was at a rowdy, quite grotty Brighton pub last night for New Years Eve and behind the bar was a picture of Pope Francis. Both me and a drunk old guy propping up the bar agreed..."That's weird."
at January 01, 2014

Pax Christi, Brother! Put a holy water font at your front door, and refuse entry to anyone who will not dip and cross.

What is peace? More to the point, what is Christ's peace? It's never an incubator for sin. If friend A is upsetting friend B, and your good self, for no good reason other than friend A doesn't give a toss, friend A is abusing your hospitality and the good will you bestowed upon friend B. Friend A has a choice - he's not and should not be running the show - behave or there's the door. Easier said than done, however, but you can't force someone to care about other people. Is a serial abuser of hospitality someone in need? Who can say?

As for the Pope's concept of peace and fraternity; 'despise not your own flesh', is the first rule of charity. When the Franciscans and the brow-beaten 'traditionalists' receive some papal charity it might matter that he 'seems' to care about the rest.

At a time when the Vatican has behaved towards the Franciscans of the Immaculate in the same way and for similar reasons as Cain behaved towards his brother Abel, who also had offered a Sacrifice more acceptable to God, the pope chooses to give in paragraph 2 of his "Message for the World Day of Peace" an account of Cain and Abel which interprets this profound religious text in terms of schoolboy Marxism.

Not That Guy said...

Not That Guy said...

I think you'll appreciate this: http://ebougis.wordpress.com/2014/01/02/these-are-the-droids-youve-been-looking-for/#comment-3201

Occasionally the refusal to tolerate aberrant behaviour is an act of charity. Tolerance of some behaviours misleads some into believing certain behaviours, uncharitable in themselves, are without consequence.
Luke 17:3 contemplates and encourages believers to correct their brothers when the circumstances call for it.

A props nothing at all, I have just awarded you a Sunshine Award: http://ccfather.blogspot.co.uk/2014/01/bringing-sunshine.html