The Tony Blair Guide to Philanthropy 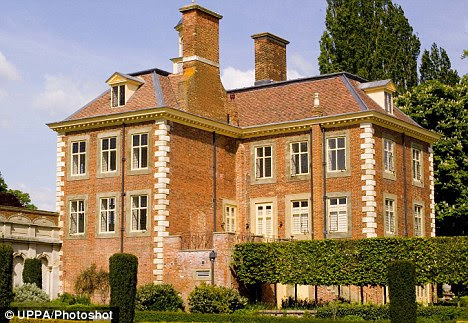 Step #47: Once you've got minted and set up a Faith Foundation, extend your £5.7 million Buckinghamshire estate.

The Daily Mail reports that...

Tony Blair has been told to rethink his plans for developing his £5.75 million Buckinghamshire estate, it was claimed today. The former prime minister wants to build a sports hall and reinforce some of the walls at South Pavilion, the Grade 1 listed former home of Sir John Gielgud he and his wife Cherie bought in 2008.

But English Heritage is said to have written to Aylesbury Vale council expressing concern about their plans. It claims they do not show due heed to the 'special character' and the local building's 'traditions' on the 1704 estate at Wotton Underwood, according to the Sunday Telegraph.

Personally, I hate philanthropists. They're usually Freemasons, they usually think that their genes are 'good stock' and they usually despise the poor while pretending to help them. Bill Gates, the Rothschild's, the Blairs...they're all cut from the same cloth. They're the kind of rich who believe in the financial equivalent of carbon off-setting. They feel a bit guilty about being sickeningly rich so after they've bought another Bentley they have a massive dinner party with their other sickeningly rich friends to raise money for their own ego-fuelled foundations to fight against malaria or even more likely, a new birth control initiative in Africa.

They believe they are above the law since they hold that money and worldly power has raised them to sanctity. Yet they cannot see that their wealth and power has corrupted their hearts and made their love for God cold. They never think of truly giving alms in reparation for their sins nor seeking, let alone finding the road to Life Eternal since they cannot truly love the poor. They are usually into the occult and new age philosophy and are usually utterly blind to the fact while they think they are 'noble' or 'philanthropic' that Satan is keeping their seats warm for them in Hell.

Personally, if I ever 'struck oil' and got loaded, I don't know what I'd do, but I would feel compelled to buy a marble sanctuary floor for my local parish church. Dunno, maybe set up a couple of religious communities or something. I know I shouldn't be so uncharitable to philanthropists but according to the Bishops, Christmas is over, so hostilities can go ahead as usual as they would in Ordinary Time. Tony will understand, since he's knows the Middle East so very well! I know we Christians are called to be peacemakers and to practise charity, but heck, someone's got to warn him, even if whenever anyone does, like the 1 million who marched on London, Tony knows best!

Apart from anything else, he hasn't learned that 'modernising' entails diminishing, diluting or destroying the essential character of the 'project'. He did it to Labour, now he's doing it to his own estate and we know he'd like to do it to the Church, if only the Holy Father could be bought off! Give it up, Tony and Cherie, that's your love of money and your heresy! The Holy Father isn't going to change his mind on contraception no matter how many times you tell the World you think its fantastic!
at January 04, 2010

Don't have too much time for Tony any more, but Bill seems to be sponsering allot of research into third world diseases. The sort of stuff the drug companies don't touch because there is no cash in it. I was sort of impressed by that but maybe I'm naive. And I've no idea what his other donations fund. What if the Church building fund obtained a massive donation from one of these corrupt individuals?

Then we say 'Thank you very much!'