Finally! Exclusive Pictures of My Fish! 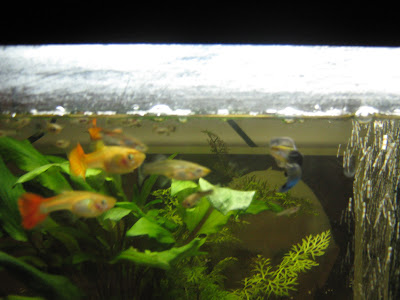 Action shot! Happy, happy fishies! My fish, swimming, with Pope Benedict XVI in the background, looking on. The blue one on the Holy Father's head is the tank fluesy. She sleeps with all the other orange fishes and gets up the duff constantly. Still, even though she's the tank bike I respect her pro-life stance. 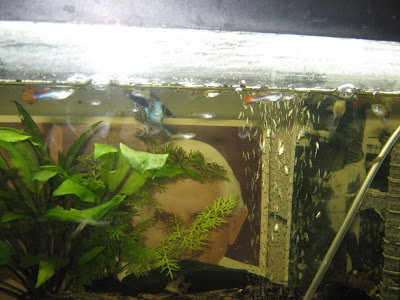 Pope Benedict XVI in even better light, shrouded mysteriously by the vegetation symbolising the new life of Christ, also symbolised by, err...the waters of err...Baptism. To the right you can see George Best celebrating with his Man Utd team-mates and a bit of a crumbling monastery fish tank feature I got for Christmas from my uncle! I love my fish. When one dies I am comforted by the fact that they breed like rabbits and more are always on the way. The tank now is a smaller version. I had a massive one until recently which was too big for the room. This size fish tank is just right!

I had a meeting at the Brighton Unemployed and Families Centre Project (BUCFP) yesterday to restart the Magazine Group they have there. A few people want to join. They say I could teach Desk Top Publishing as well, if I want to. The magazine group had a bust up a couple of years ago, when I wanted to put a LIFE support number on the back of the issue. It was printed then there was a couple of complaints from centre users, don't know who. Anyway, I said, if the number stays, I stay, if the number goes, I go. They said, "Bye" and I said, "Bye!" They managed to produce one or two magazines after that then the whole group fell apart. Now, the guy who was at the meeting when it was decided the pro-Life number should go seems to have forgotten all about the massive row and says, "Sure, come back."

Still, I really need a job that pays as I'm really in the proverbial and have to sell my car and that means the gardening business has disappeared down the crapper in much the same way as 'Sanctam', that beloved fish of mine, who discoloured, turned on its side and tragically died, had to. Oh well! We live to fight another day! I suppose we Catholics should get used to unemployment and economic misery, since we are promised by both Sacred Scripture and holy mystics of the Church, that during the reign of the Antichrist, which looks like its on its way, we shaln't be able to buy, trade or sell anyhow. But after that, Our Lord will return and those who inherit Eternal Life will live in the City of God where money is replaced with the golden, priceless currency of Love, Mercy and Justice. I hope and pray I and all who I love make it there! Still, I'll keep looking because someone around here's got to pay the bills! If only real employment was as rewarding as volunteering. I think city traders should spend a day at the Unemployed Centre and see the goodness and kindness of people to each other. People actually care about other people there (even if some don't recognise the unborn as people). On the whole, its very refreshing.

I did an interview with Fr Ray for that magazine and a couple of people looked at it today, including one guy who used to go to St Mary Magdalen's for a while and was thinking of instruction. A British-born Indian lady, Narinder, I think, said the story about how the Church has a mission to love the poor, about Fr Ray helping the rentboy who'd got beaten up one day in 2007, I think, was 'moving and inspiring'. She said she was depressed until she read that. That's the kind of thing that cheers people up, she said. She said we might be able to get funding for it. I was wondering if we could get advertising for it, over time and generate money for the BUCFP, as it can't be a Churchy thing. I could declare myself to be Editor in chief and say that henceforth all articles are to be Catholic and any profits go to the Church, but I think that could result in another bust up!
at January 20, 2010

Lawrence, you could only get advertising revenue for your magazine if you were a one legged, black lesbian. Sorry.

But if you put it outside the centre and in pubs and cafes and laundrettes and stuff? No? You gradually get a higher print run?

If you get a copy of the Local "Big Issue" for the next few months then you will see who advertises in it these days - that would give you a list of potential advertisers. Also the local authority services. But I'm probably teaching granny how to suck eggs here.

No, its a good idea.