Does the Principle of Double Effect Work for Condoms? 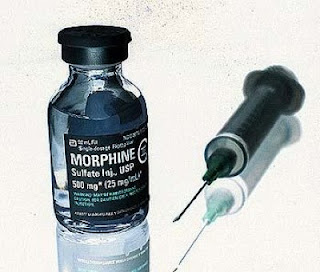 I am in touch with a Priest who advocates the use of condoms in marriage when one partner is HIV positive, in contradiction of what Catholics understand to be the teaching of the Church.

His defence is an appeal to the principle of double effect. In other words, because the intention of the HIV positive partner is not to transmit the virus to his or her spouse, the use of the prophylactic is not intended to exclude God's place as Creator in the act of union, but to strive to reduce significantly the chance of infection of his spouse.

The fact that every single time (assuming that the condom does not fail) he makes love to his wife, the outcome may be to exclude God's creative purpose in lovemaking is, he holds, an unintended side effect, thereby not just mitigating, but removing the guilt that would have been his.

The example cited by Church theologians is that of a doctor who gives more morphine to a patient than usual with the intention of relieving pain. Even if that dose of morphine kills the patient, it is asserted, the doctors intention was to reduce pain, therefore he is not guilty of wrongdoing. The question is, does this work with condoms in marriage where one person is HIV positive?

I would argue strongly that traditional Catholic Teaching does not look upon the sexual act in marriage merely as 'love-making' in the secular view, for 'making love' in the secular view would not readily reject condoms dogmatically as contrary to the purpose of the act. The Church, certainly since Pope John Paul II, sees the sexual act in marriage as both unitive and procreative. The use of the condom is not sinful just because its 'side effect' is to deny Almighty God His sovereign, creative purpose in the creation of new life. The use of the condom is sinful also on the grounds that it denies the unitive aspect of the sexual act. The use of the condom is doubly gravely sinful because it denies both the procreative and the unitive aspects of the marital act. It denies not one, but both of the purposes of sex within marriage. Its application within marriage, even with good intentions, denies and destroys the whole purpose of sex.

Why do condoms attack the unitive purpose of the sexual act in marriage? Because Our Blessed Lord said that when a man and a woman leave their mother and father they marry and become 'one flesh'. The whole Holy Tradition of the Holy Church reflects that a man and woman become 'one flesh' in marriage, and, give themselves to each other totally, without reservation. The condom is a barrier not just between a couple and God's creative right in marriage. It is a barrier between the man and the woman themselves in the sexual act. For these two reasons, even if the intention is good, the whole Tradition of the Church rejects the condom's application in marriage.

This is just my opinion, of course, but I somehow cannot see either St Thomas Aquinas or St Augustine, or any of the Doctors of the Church, given what they wrote, arguing for condoms in marriage, in any circumstances. If a doctor gives more morphine than usual to a patient to relieve pain but the unintended side effect is death, the doctor did not know that the outcome would certainly be death. In order to reduce suffering, he took a similar risk out of concern for his patient as a doctor who performs high risk surgery to save a human life. The situation with condoms in marital sex is different.

In other words, if a married couple find that they cannot in conscience 'go forth and multiply' or become 'one flesh' then the moral duty is to go forth and embrace the Cross of Christ. A man cannot contradict or reject his duty to reflect God's own nature of total self-giving, as exemplified by the Cross of Our Lord Jesus Christ, without going against his sacred Conscience.  The condom strangles and restricts that total self-giving in the sexual act immediately and throughout the sexual act. The man is consciously aware of that one unfortunate fact and so is the woman. The man and the woman, in this painful vale of tears must, then, give themselves, in a new and sublime sacrifice, the embracing of which is a true reflection of Divine love, to God.

Contrary to popular belief, the invention and widespread use of the condom do not present the Church with a 'new dilemma'. Attempts at thwarting both the procreative and unitive purposes of sex within marriage are as old as sin itself. Neither is it true to say that potentially fatal sexually transmitted diseases constitute a purely modern phenomenon. All comments, positive or negative, on this post are gladly welcomed because whether the Supreme Pontiff meant to or not, his words, reported during an interview appear to have opened up a debate, the outcome of which, if it takes place in the highest levels of the Church, is of supreme importance to the life, health and future of the Universal Church.
at November 22, 2010

Theresa of the villa said...

Interesting reflection, but I would still say the problem with this is the RCC has never insisted that sex must be procreative - we know that because it has always insisted on the distinction between natural and artifical contraception, with the former being theologically justified. Now, if it is acceptable to make love in order to express your fidelity and marital affection while knowing that (e.g.) infertility, menstruation, or the natural cycle will prevent the production of a child, then surely we cannot impute upont he Church the position you are suggesting it takres with regard to sex.

The principle of "double effect" implies that the "moral species" of an act is already known. But of course we do not know in the case of a condom used with the specific intent of preventing the spread of disease, and not in order to contracept, whether it is in itself bad. That fact that contraception results is praeter intentionem; in which case the use of the condom might be understood as not destructive to the nature of the marital act; i.e. intentionally the couple may remain open to the uniative and life-transmitting purposes of sexual expression. And intentionality is the only way known to Humanae vitae and the Catechism of judging whether or not an act is contraceptive in nature (so long as it retains the natural form of sex) otherwise no exceptions for things like the therapeutic pill, sterilisation etc could be made because they all have the same effect but it is "beside the intention". So the question is only, does the use of a condom change the "form" of the act, or is it still a natural act? Basically, it comes down to whether we think that a man must deposit his semen into his wife's vagina in order for sex to be a natural, marital act. Now, this seems a big question to me. Today we know that the contribution of the semen to procreation is only part of the process: and we interfere (legitimately in Catholic teaching so long as we don't intend to contracept) in the other side (ovulation, whether the ovum can deposit itself in the womb, etc.). So is it possible that we can legitimately (not intending to contracept, but to prevent disease and inevitable death) interfere in the male contribution to conception?

I should say, I like the simplicity of not thinking about this and just saying "abstinence is the best". Of course it is. Of course Catholic teaching about sexuality stands as the ideal, and as the Pope points out we need shining examples of it to humanise our understanding of sexuality. But nevertheless we exist in the world where the "Pandora's box" has long ago be opened, and pretending it hasn't just doesn't work. It is of its nature very complex, alas.