Draconian Britain: Is Cameron Envious of the China Model? 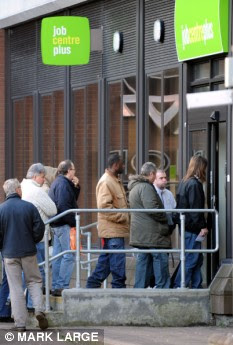 The Telegraph today highlights a new development in the Coalition Government's far-reaching 'reform of the reform' of the benefits system. The article says...

'Anyone claiming unemployment benefit will have to sign a "three strikes and you're out" contract setting out punishments for the work-shy. Iain Duncan Smith, the Work and Pensions Secretary, will announce a "claimant contract" which will set out the sanctions against those refusing to take up offers of work.


Those who fail to accept a job offer, or refuse to apply for a position recommended by an employment adviser will, on the first occasion, lose their £64-a-week Jobseeker's Allowance for three months.

If they do it a second time their benefit will be halted for six months. If they refuse for a third time they will lose the benefit for three years.

Those who refuse to take part in unpaid community work, which will become mandatory as part of the Government's new welfare-to-work plans, will be subject to the same penalties. Last night, David Cameron said a "life on benefits" would no longer be an option for those capable of returning to work.'

And there we were thinking it was only Communists who advocated forced labour, so it is ironic that David Cameron should say, "This is the deal. Break that deal and they will lose their unemployment benefit. Break it three times and they will lose it for three years", in a country in such close proximity to China. When Cameron apparently told the Chinese to "embrace freedom and human rights", I expect that the Chinese Premier replied something along the lines of, "Screw you. Not only do we make all your stuff and pretty soon we'll own all your arses, but, regardless, it looks like you've keen on adopting quite a few of our policies."

Anyway, I've already posted on this, re-iterating that the Church's social teaching affirms that the 'labourer is worthy of his reward' and that compulsory work for under £2 an hour is no recognition of the labour hired and that it sounds like yet another sin crying out to Heaven for vengeance, namely the defrauding of the poor and the denial of wages that reflect labour hired, could be enshrined in UK law very soon. When two are already on the Statute book, I guess, where is the harm in adding another?

As it happens, last night I met a homeless man wandering on the London Road who hasn't had any state benefits since last October. I'll call him 'Stephen' for the sake of it. Gaunt, shivering and bearded, he looked strikingly like Our Blessed Lord as he approached us.

He told me that after he left Phase One, a local detox support hostel, his rough sleeper workers were meant to instruct the hostel to forward mail onto the man in question, care of the rough sleepers team. Three months past and the man received no mail. Finally, exasperated, he asked them once more to go and check whether Phase One had any of his mail and so they did and indeed, they did! Loads of it! It had been withheld from 'Stephen' for a reason known only to Phase One. Among his assorted mail was an important letter asking 'Stephen' to attend a medical assessment at Atos Healthcare to see whether he was fit for work. Obviously, not having the letter, he did not attend since he was not informed. Because he was not present for his medical examination his benefits were stopped and never started again. Now that's what I call draconian!

I asked him how he has been surviving for a year. Ashamed, he told me that he shoplifts for food and beer to survive and because he is alcoholic. He has been before judges many times, weeks ago, even, only for judges to say, "We don't know what to do with you, because you've no money whatsoever. You can't even pay fines and all the prisons are full."

I've contacted The Argus, our local newspaper, and asked whether I can write a piece on Jason, homelessness and human rights and they've kindly agreed to 600-800 words, though apparently they can't afford to pay, so I guess this labourer isn't worthy of his reward either.  Jason told me last night that he and two other homeless people were approached by a man with a large camera offering £500 to each homeless man for his story for an article claiming to be a journalist from The Argus.  All three homeless men and women have experience of being offered cash by undercover cops pretending to be addicts, while being filmed, in a method of entrapment by police to put them in jail, so, all three told the man to go away and turned down the money.

While on the phone, therefore, to The Argus, I asked the editorial team whether the man was employed by them and they answered that he most certainly was not, because The Argus cannot afford such sums to pay people for their stories anyway. I believe them, for they cannot even afford to pay a freelance would-like-to-be journalist for his services. So, it begs the question: If the cameraman offering £500 to homeless people to get their picture and story who claimed to be from The Argus was not from The Argus, then for which division of Sussex Police was he working?
at November 11, 2010

Laurence - I can't see what the problem here is?

The policy talks of withdrawing unemployment benefit from people who refuse to take up offers of employment (not forced labour).

You mention the church's teaching that the 'labourer is worthy of his reward'. What you fail to see is that this can be taken to apply to those who are actually working. Surely each 'labourer' is entitled to his reward rather than having it gobbled up by someone who is unwilling to work for his own reward?

'What you fail to see is that this can be taken to apply to those who are actually working. Surely each 'labourer' is entitled to his reward rather than having it gobbled up by someone who is unwilling to work for his own reward?'

I'm a public sector worker now (although i used to work in the private sector) and i can tell you my workload is much heavier and more complex now than it was before, and i get paid less too. I frequently work 50-60 hours each week. You're very good at sweeping generalisations, everything is always so black and white with you. Quite frankly your remarks are insulting. At least i earn my wages to support myself and contribute to society by paying my taxes, unlike yourself who does not work and lives off benefits for extended periods of time. Perhaps if you didn't insult whole sections of society everytime yu opened your mouth, and were so angry all the time then you would be more successful at interviews.