Was this the moment when... 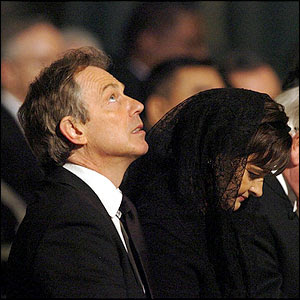 Tony realised God had given him the special mission of campaigning to change the Magisterium of the Church? This picture, taken at the funeral of Pope John Paul II, makes one wonder. Damian Thompson posted recently on the Blairs seemingly relentless desire to make the Church 'modernise'. Clearly Tony was experiencing a vision of Pope John Paul II appearing to him from Heaven telling the former PM that the former PM was right and he was wrong.

The Blairs are apparently big fans of Cardinal Newman, that renowned 'anything goes' liberal Cardinal, the maverick dissident, always at odds with the Holy Father, who campaigned so vigorously for change in Church teaching on homosexuality, contraception and access to abortion, who sought to refashion the Church in his own image...Yeah, right!

Great picture - definitely having a vision! More likely he had just spotted a pigeon before it 'spotted' him.