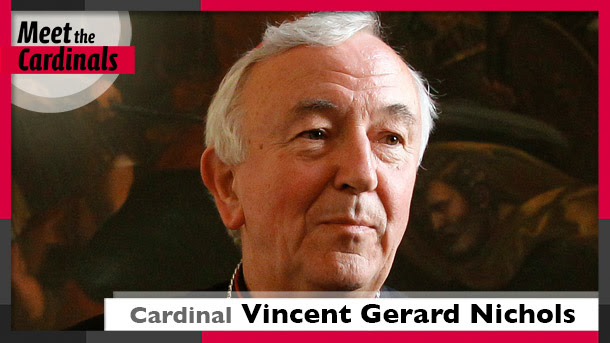 Readers will, I hope, join me in praying for David Cameron and Cardinal-Elect Vincent Nichols, that these astute and able politicians may one day, by the grace of God, become the moral crusaders this country desperately needs, laying waste to the culture of death and promoting a culture of life, love, concern for the vulnerable and liberty for the Church of Christ.

There is a moral crusade out there, that involves defending unborn human life and mothers at risk of abortion, a crusade for purity and the teaching of virtue in schools, a crusade in defense of virginity, chastity, marriage and the family, a crusade for the return of devotion to Mary, the Ever Virgin Mother of God in our isles. At the current time, neither the Cardinal or the Prime Minister is remotely interested in any moral crusade other than those which are politically opportune for them in their chosen fields. It is sad to say that neither of these men belong with Martin Luther King or Blessed Teresa of Calcutta, or even Mary Whitehouse and Billy Graham.

These people, whatever anyone thinks of them, stood for something - right and wrong - and unless you stand for something, as the saying goes, you will fall for anything. Having watched in abject horror as he laid so low during the 'same-sex marriage' debate, I hope readers will forgive me for my cynicism over Cardinal-Elect Vincent Nichols's recent crusade against benefit cuts.

That Cardinal Vincent Nichols can, as we have seen, attract such widespread press in the wake of his comments on the Government's fiscal policies only serves to make more apparent the impact such prelates could have made, and still could make, in a country that has surrendered the institution of marriage to a band of the wicked.

That Cardinal Vincent Nichols can, as we have seen, attract such widespread press in the wake of his comments on the Government's fiscal policies only serves to make more apparent the impact such prelates could have made, and still could make, on the issues of abortion, human embryology, artificial contraception, the campaign for assisted suicide and the vast array of evils that blight the United Kingdom, whether its inhabitants be rich, or indeed, poor.

Perhaps, too, join me in congratulating John Smeaton, a real moral crusader for marriage, life, love and for the unborn child, for his Cardinal John J. O'Connor pro-life award from Legatus. If only H.M. the Queen, the UK Government and the Catholic Church of England and Wales saw fit to honour those who stand up in defence of truth, human life, the unborn child, marriage and the family such as John Smeaton. This is an honour well-deserved, John, for your bold witness in standing up for the Catholic Faith and for marriage, the family and the innocent unborn. Moral crusaders, you know, do not simply 'hold their tongues'.
at February 19, 2014

Cardinal Nichols can't be too hasty about what to defend, because, according to him, fundamental teachings of the Church can change, no?

I mean, "Who knows what's down the road?"