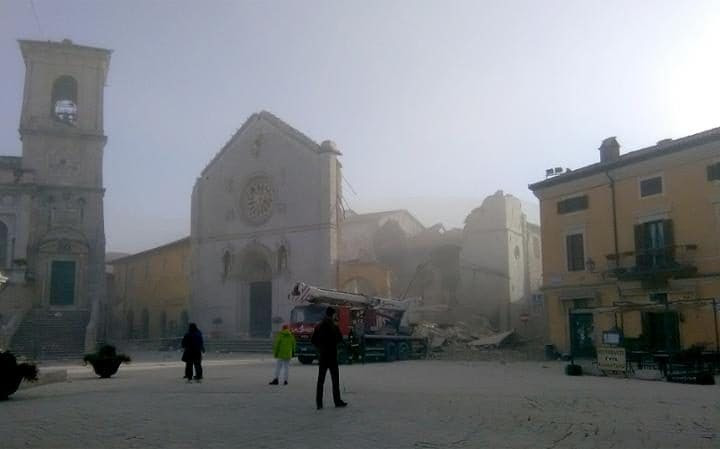 Norcia has been struck by a 6.6 magnitude earthquake that has flattened homes and made residents homeless, destroying the Monastery of St Benedict and St Scholastica. Keep these distraught people in your prayers and if you are able, donate to their funds for relief.

Having expressed his 'closeness' to the people of Norcia, His Holiness as far as we know still intends to travel to Lund, Sweden, to celebrate the Reformation and will, true to current form, laud and honour the infamous heresiarch Martin Luther, thereby giving a new meaning to the words...

Let's not let an earthquake in a nearby town to Rome put the breaks on a pointless ecumenical circus in honour of a man who died a public enemy of Christ and His Church. And this is before he has - as I suspect he will, in some form - given the go-ahead for 'inter-communion' with the Lutherans as some kind of 'merciful', 'ecumenical' gesture.

After all, not to give Holy Communion to a Lutheran would be a 'sin against ecumenism', wouldn't it? Not to let those who do not recognise Him under the guise of bread and wine - who are not in Communion with Him or His Church - who have not discerned the Body, therefore eat and drink unto their guilt - would just be 'rigid'. 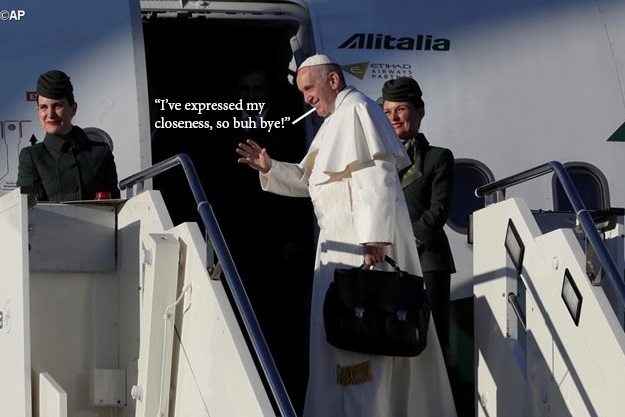 Perhaps Pope Francis visit Norcia after the debacle in Lund and the customary multiple pile-up interview on the way home as one of his 'Mercy Friday' gestures and to make reparation for those carbon related eco-sins committed by another wholly unnecessary flight. Why go in person to Lund when you could Shepherd Catholics - your sheep - and send your honorary heretic Cardinal Kasper to go and represent you in Lund?

yes, there seems to be a number of made up new 'sins' these days. But what about the old ones that offended God? Is He no longer offended by sin?

What did you expect Lawrence from papa Franco the Protestant!

Pope Francis, as usual has hit the nail firmly on the head.
“We have the opportunity to mend a critical moment of our history by moving beyond the controversies and disagreements that have often prevented us from understanding one another.”
Pope Francis calls us to abandon the doctrines so zealously defended by saints such as Francis de Sales and Ignatius Loyola. Pope Francis calls us to stop honouring martyrs such as Thomas More, John Fisher and Edmund Campion. These were the people who just perpetuated divisions.
“We too must look with love and honesty at our past, recognizing error.”
We must stop calling the Catholic Church the one, true Church. We must stop this silly nonsense of saying that our doctrines are the correct ones. We have ERRED!
“it was perpetuated historically by the powerful of this world rather than the faithful people”
The division between Catholic and Protestant could have been ended centuries ago if some Pope like me had been in office instead of all those powerful prelates who insisted on being totally rigid all the time.
“to tell that history differently”
Let us no longer talk about history the way it was. Let us rewrite it so that it appears that the Catholic Church was grievously to blame for the Reformation and dear Martin was just so spiritual he had to set up his own Church.
“With gratitude we acknowledge that the Reformation helped give greater centrality to sacred Scripture in the Church’s life.”
Let us from now on acknowledge the Protestant doctrine of sola scriptura.
By following Francis’s lead we can end these divisions in a flash. We can all become Protestants. Only one little problem: What kind of Protestants should we become? There are so many different kinds to choose from. Mr Heinz and his 57 varieties has nothing on Protestantism.

Perhaps, if and when the Pope visits Britain, he will point out to us how much Catholics here owe to Henry 8th.

Today is the Feast of All Saints, and those Saints include the Holy English and Welsh Martyrs. I intend to pray to them daily this month for their intercession in strengthening the Catholic faith they did so much to defend and spread among the people of this country. Their speech was "yea, yea: no, no" [Matt 5:37] and they never hesitated to dispute with their tormentors, in the hope of converting them.

In fact, let's all say the Prayer for the Conversion of England.
http://vultuschristi.org/index.php/2010/09/prayer-for-the-conversion-of-e/

A practical step, which will do a lot more good than pretending there is 'more that unites than divides us'.