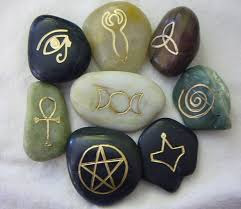 According to the Daily Mail, 'paganism has been included in an official school religious education syllabus for the first time'.

This is interesting because it suggests that prior to the arrival of Christianity on these isles there was no such thing as a religious education syllabus, or, indeed, any education whatsoever. It was the Church that was the great educating force of the British Isles.

Why is the Church depicted as being an institution trapped in the 'dark ages' but paganism now gets a free ride even though it precedes the Church? The Sacrifice of the Mass is 'medieval mumbo-jumbo', but the superstitions of paganism and its historical sacrifice of children (I know pagans don't sacrifice children anymore, at least not outside the womb), a practice which archeologists assure us was commonplace in pre-Christian England, is just one of those aspects of the pagan religion which we should now overlook. Hey, at least we educated pagans not to do that. Not that that fact will be taught in schools. To me, it just seems like more evidence that liberal progression is anything but. It's about regressing to a time before the arrival of the Church but with better technology.

Cornwall Council has told its schools that pagan beliefs, including witchcraft, druidism and the worship of ancient gods such as Thor should be taught to children as part of the syllabus. Ah well, should this become more widespread, at least Catholic schools can just carry on as normal. We seem to churn out pagans by the lorry load.
at April 20, 2012

Email ThisBlogThis!Share to TwitterShare to FacebookShare to Pinterest
Labels: paganism in schools

Parents and civic society, including Church communities, need to get the State out of their children's education. The only acceptable role of the state in education is as a conduit of funds. Anything more inexorably leads to the state imposing an ideology that allows it to abrogate more power to itself and oppress people by suppression of natural institutions such as marriages, families, communities, Church where the Truth, and an integral power naturally reside.