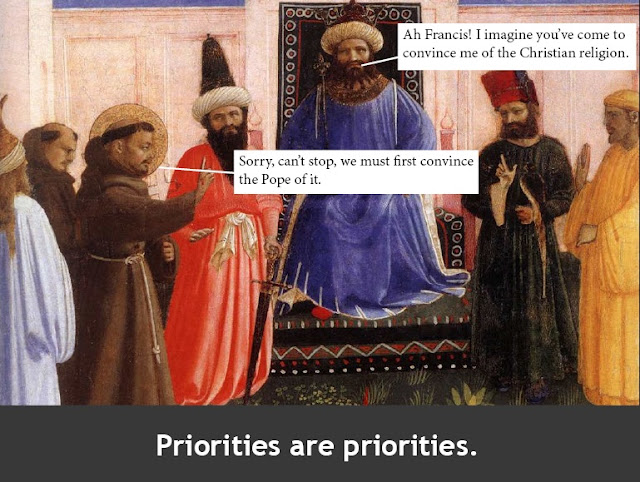 Columba of Iona (521-597) was said to have a powerful voice that could be heard from hilltop to hilltop.
People spoke of his piercing blue eyes that could look into the souls of men.
All that may be hearsay.
But it tells us something about the man who brought the Gospel to the heathen.
Columba saw Iona as a school for missionaries.
Unless the Church rediscovers its missionary identity it will decline even further.
A street preacher told me: 'The Gospel melts some people like honey and turns others as hard as iron.'
Another said: 'It's getting harder. People hear the Gospel and they don't like it.'
And still another (preaching in Cheltenham) said: 'I think England may be so far along the road of unbelief that it is too late to turn back.'
Yet I remember the words of the old Guest Master at the Abbey of Santa Maria in Garvald, Haddington (Nunraw Abbey) a moral theologian by training.
He told me: 'Priests come here from the foreign missions and they say that maybe they should just try and make the Hindus better Hindus, or the Buddhists better Buddhists.'
But this Cistercian monk told them that they MUST preach the Gospel.
He said to them:
'There will be some days when it will be very hard and in your night prayers you will say - Lord, you will need to help me because the work is so difficult.'
That is the spirit of Columba.
Prayer. Fasting. Penance. Reading the Scriptures. Receiving the Eucharist.
Fearless preaching.
Preaching on fire, anointed with the Holy Spirit.
Preaching to the Jesus haters and the Jesus scoffers.
To the broken hearted.
Preaching to every living creature as the Son of God commanded.
When my mother was dying at home aged 97, it was a joy to have a Catholic priest come to give her the Last Rites.
I could say to her in all faith:
'When you go into the valley of the shadow of death, Jesus Christ will be waiting to greet with love and joy.'

Rome, 5 November 2017,in S.Paolo fuori le mura there will be an Ecumenical Mass and common Eucharist for Lutherans and Catholics ministers......God, have mercy on all of us.

Please watch Edward Pentin, Catholic Identity Conference 2017 (YouTube).
The foremost English-speaking Vatican journalist, Mr Pentin begins by saying that the crisis in the Vatican and in the wider Catholic communion is not much reported in the mainstream Catholic media.
The reason? A reluctance to launder one's dirty washing in public. Some who are in a position of authority are in denial that there is a crisis at all.
Mr Pentin gives us an informed, balanced and unflinchingly honest appraisal, tempered by his love of the One, Holy, Catholic and Apostolic Church.