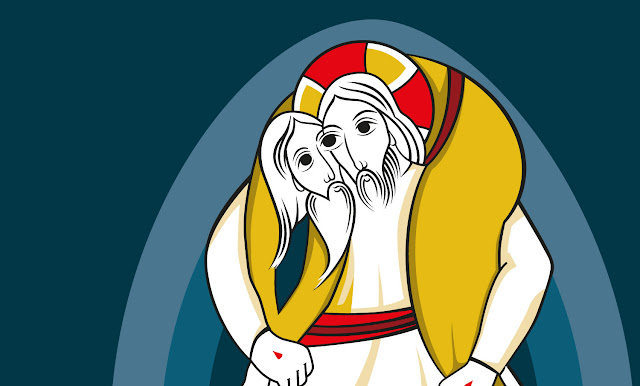 When the website and blog, One Peter Five, published a priest named Fr Dollinger's claim that Cardinal Ratzinger told him that there was more to the third secret of Fatima than which was revealed the Vatican immediately responded with a press office denial, paraphrasing the Pope Emeritus's rejection of the claims as 'pure invention'.

Make of that what you will, but I can't help thinking the Year of Mercy logo has been given a whole new meaning by the hydra-headed papacy debate. Which Pope is carrying whom?

And they appear to be sharing a third eye.

No EYE-dea what it all means

There are one or two note-worthy and intelligently analytical posts on Louie Verrecchio's blog, AKA Catholic, that touch on the very questions you have raised, Bones, and which I offer here with this comment of mine. Very strange doings.

In respect of the Third Secret of Fatima, see here:

In respect of one pope two popes see here:

Art is supposed to inspire piety. This modern art is pathetic. When will the Church condemn this type of art as blasphemy?

Christopher Ferrara (Lawyer, author, and 'Remnant' columnist) has published a piece in 'The Fatima Crusader' which, I believe, is worthy of serious reflection. Here is that link. We are all in this together.

Why is Jesus water skiing when he can walk on water?

I saw that type of over shoulder hold on World Championship Wrestling.

Just tossing this out there, but is it possible that IF Benedict's resignation was not completely voluntary, that he might have given his resignation in such a way that he (or a successor) could, if/when the opportunity presented, cast enough doubt on the Bergoglio pontificate that any damage could be undone?

I know I shouldn't say this, but that logo reminds me irresistibly of an old Ray Milland horror flick called, if memory serves, "The Thing With Two Heads".

Thank's for the chuckle Bones. That logo is also used as a comercial brand.

The triclops of the year of anti-charity (anti-charity = anti-truth) is a mockery of the Holy Trinity. The worry about the Fatima prophecies...with respect for your situation, how can these be real for Novos Ordites?