Evidence of Religious Motivation for Riots 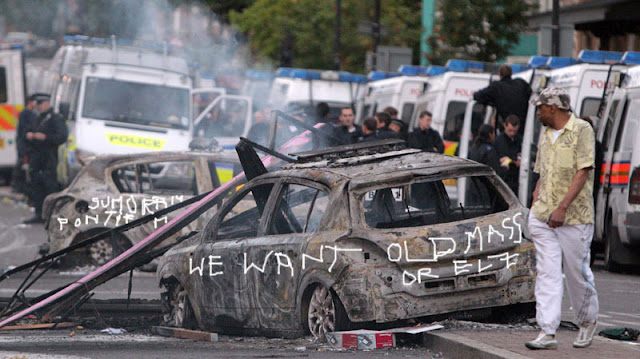 You've got to laugh or you'd cry.

Back to Margaret More. She didn't suffer from an absent father and look how she turned out!

Saint Thomas More pray for us.

If Voris had been here it wouldn't have happened.

LOOTED ROSARIES NOT COVERED BY INSURANCE!

I'd like to thank everybody for coming to protect the Catholic Truth Society yesterday.
It went well and a permanent group has been formed, possibly named Vince's Vigilantes. Alternative names considered.

There was some trouble with the women throwing buttered scones but, apart from a little offensive language (from the women) it was very peaceful.
The displaying of rosaries for sale to approaching hoodies avoided any violence.
Plainchant from a ghetto-blaster calmed those who came near until it was pinched.
Laurence England travelled up from Brighton and busked loudly which removed the last stragglers bent on destruction.
Well-done comrades!

Whoever took the urn please return asap. Those women who came in drag looking for militant action have been expelled.

You make some very good points. I shall use them as 'ammo' at work, where discussions about the riots continue........

Laurence mate, you are being swamped with Sheilas.

There's an epidemic of skirt-burn around.
My strides were wrecked at the Catholic Truth Society "peaceful" demo, covered in squashed scones and butter, missiles from the females because the blokes wouldn't tidy up.