Synod of Collegiality, Parrhesia and Walking Together Draws to a Close 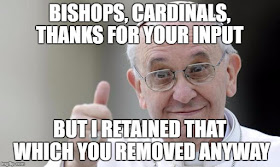 Because apparently there's no point acquiring extraordinary power if you cannot use it in an extraordinary way.  I guess there's no point gathering a consultative committee of bishops and cardinals to listen to their 'insights' from around the World, if you can't then overrule their voting decisions by the use of the sheer privilege your Office and Authority provides in the 'round up' of that gathering. Because power. Because 'I can'. Let it now be said just what an inordinate, absurd waste of time, money and energy that Synod on the Family, which has spanned two exhausting years, was.

Please, please, please don't anyone dress this multiple car crash up as some hopeful backdoor success for orthodoxy. Your Catechism has been sneakily stolen by a cunning, opportunistic street urchin who already has in his mind a million excuses as to how to defend his actions. Why? Here is just one of the whys. The others are currently being fleshed out by other bloggers and concerned Catholics at all levels of the Holy Church of God...

A document that addresses the reception of Holy Communion which can be interpreted differently in Germany to in Poland, from Diocese to Diocese and eventually parish to parish is an unmitigated triumph for Cardinal Marx and Cardinal Kasper. As far as they are concerned, the Polish Bishops can do whatever they like. It's not their problem. Their problem is overseeing the decline of the German Church and presenting it as a success.

It is a triumph for them as well as for all those other Bishops around the World for whom the issue of Holy Communion for the faithless, for adulterers and for all they cannot bring themselves to call to repentance for lack of spine and for love of money and prestige has caused them such a publicly expressed 'concern' within the Church. Not that they are concerned for souls, naturally. Far from bringing this issue to a close, however, there is every chance that this issue is now going to be the focus of a civil war within the Church, one overseen by the Pope and his Successors because within even countries and nations, unless individual Bishops conferences make a joint declaration, even Dioceses and parishes will, within a matter of time, do 'their own thing' based on 'their own interpretation.' Nobody - not one soul - will be able to say 'Pope said no, so end of'. So let's be clear. This is not a 'Humane Vitae' moment. Not one bit of it.

As made very clear by Voice of the Family - a much needed voice it is too...

The Pope has given Cardinal Kasper and his friends precisely what they wanted.

Let them have their 'victory lap'. God willing, it won't last terribly long but after all...

He has done what he was elected - and for which others were canvassed - to do.

And if you didn't see this multi-faceted 'gem' of a tragedy coming, a travesty for the Church's catholicity, its universality, its unity, a travesty for souls, for the salvation of sinners, for vocations to the priesthood, for the clergy, for religious life, for the protection of the Eucharist, for the Sacrament of Matrimony, for canon lawyers, for the proclamation of the Most Holy Faith and more, then today should be for you the wake up call you needed.

This is a war, it is ongoing and a significant public victory has today been won by those who are working to undermine Christ's Church and His Teachings by severing 'doctrine' from 'reality' by talking about reality as if 'reality' is  - as soon as a couple enter a parish Church - a pastoral pseudo-reality, immovably fixed in grace-starved habitual mortal sin. In that fictional ecclesial nureality, repentance and even Jesus Christ Himself is merely an 'idea' that the Church 'proposes'. It is faithless. It is an empty shell. It is not the Faith It is a deceitful replica of the Faith, faithful only to the outward appearance of it, created by those who do not believe in the real, authentic, original thing itself.

Nobody - nobody - is served by denying that what is within the document is indeed in the document, even if the most destructive parts are to be found within 'footnotes'. The document is riddled with confusing and erroneous suppositions and let us not be in any doubt that its authors intend for it to replace that which has come before. Even when Catholic teaching is stated the author is clearly so embarrassed of Jesus Christ that they must nearly reverse the sound teaching in the following assertion as if to please the faithless. There is no need for spin here from the BBC. The door to endorsement from the Pope for Holy Communion for the divorced and remarried, for those in unrepentant mortal sin, is there within the document itself. There can be no doubt that the Pope has publicly abandoned - in this document - that which he is called to defend and uphold.

Nevertheless, all is never lost. There is always you and your prayers and your charity and your zeal and your love of the Truth and your willingness to proclaim it. More than this, there is always Jesus Christ, the Lord, the same yesterday, today and forever. He is still Lord of Heaven and Earth. He is still King and He is still the Head of the Church, the Body of which you are if you are Catholic. All Jesus asks us to be is faithful.

He will never lead you astray even if others in authority over you might attempt to do so and do it, outrageously in His name. Cling to Him in this a day of darkness for the Church of Christ. For as surely as night follows day, so a brighter dawn will follow even the darkest of those days. Be patient. Persevere. Pray.

Pray for married couples. They are under enough strain and pressure in these days as they are. Married couples need courage, encouragement, an exhortation to Christian heroism and an endless spring of spiritual nourishment and support in the spiritual desert in which we exist. The last thing married couples needed was an Exhortation to Christlessness because, let nobody be in any doubt, that's - and alas for him who signed it and they who penned it - what they just got.


To be quite frank, if George Soros's Open Society Foundation had literally paid in dollars a bunch of apostate bishops, cardinals and got them to get one of his own friends elected Pope, I sincerely beliee that they could not have done a better job at undermining the Holy Catholic Faith than those who have done so with such enthusiasm today. And finally, if you think I'm being in any way hyperbolic of today's events, you can read for yourself what The Tablet say of this document. Good luck finding the quotes from the 260 page document that contradict their conclusion, if, indeed, such a quote is there. That's another problem you see. There is no robust defence of Catholic doctrine in this florid document, only an apology for it swiftly followed by what looks awfully like a compromise of it.

Perhaps Fr Lombardi would like to elaborate, or are we past that stage now? Just how any Priest will be able from now to refuse those he might deem will be more damaged than healed, more condemned than forgiven by their receiving Holy Communion, without being seen to be entirely arbitrary and partisan, or unmerciful, exposed and with no recourse to the protection of the highest Officeholder in the Church is obviously something the Pope has neglected to consider. What a shocking betrayal of the clergy and of Jesus Christ the document - and the application of this document - is going to entail. For no sooner has a liberal clergyman or bishop read it, or at least its summary, will it be most likely applied. No sooner will one who is not yet in a State of sanctifying Grace, one in mortal sin, hear of this 'general absolution' will he or she seek the Holy One and mistake Him for mere bread, for if they really believed it were He, they would not dare approach the One who replied to Judas and those who sought Him, "I AM."

Pray for the Church, pray for the clergy, pray for the Popes, pray the Bishops and Cardinals and pray for an end to this shameful crisis, a crisis spanning decades that today finds its most notorious fulfilment in an Apostolic Exhortation that exhorts nobody to anything, but tempts and leads many into error, sin and death. There is no debate as to who wins this war. The heel of the Immaculate will make known the triumph of her Heart and Her Son's Holy Cross. All that remains to be seen is whether we will persevere to the end in the truth praying and working for the Salvation of the World, remaining in the truth of Christ to the Glory of the Most Holy Trinity now and forever. And remember, it's still Eastertide. Christ is Victorious, allelulia!

'Anonymous' comments will not be displayed. Please use your name or a pseudonym. If you wish to comment then I ask that you maintain a measure of good will. If you are unable to do so, then please go elsewhere.