Downtown from Laurence England on Vimeo.

As the patron of comedians, it was only fair my holy patron got a slide. It's no longer his feast in England, but for a few hours it still is in Chicago, Denver, Phoenix, Los Angeles and Honolulu.

May the good God deliver His Church in the USA from such hirelings and false shepherds and deliver His entire Church from the destructive category 5 hurricane that is Pope Francis and his strange erstwhile friends, numbered among whom has long been one now Archbishop Theodore 'Uncle Ted' McCarrick, a Cardinal of the Holy Roman Church who has brought utter disgrace on the Body of Christ, ruined the lives of his victims and dragged his complicit brothers into the state of being utterly unbelievable, totally untrustworthy and, for a half-decent Pope, eminently sackable!

Truly, only a Pope as corrupt and intransigent as Pope Francis would permit these unbelievable clowns to remain and fester in the Hierarchy of the US Church with their half-baked denials of knowledge of 'Uncle Ted' and his career of evil as a priest, bishop and even as a Cardinal. May he be given the grace to repent and his victims, the number of which is currently unknown, find healing in the loving Heart of our God.

May the heel of the Blessed Virgin Mary, Queen of the Americas, crush the head of the serpent who has wrapped himself around the Church in the US and elsewhere, including the Eternal City of Rome, and may her Divine Son liberate His Church from the tyranny of heresy, sin, error and evil.


Pray! Pray! Pray that the false, illusory and counterfeit church now emerging in all its scandalous and blasphemous horror may leave Rome!

Pray for the liberty and exaltation of the Church!

May the false church being erected by stealth under the headship of a false prophet intent upon the overthrow of the indestructible Church of Christ be thrust thoroughly... 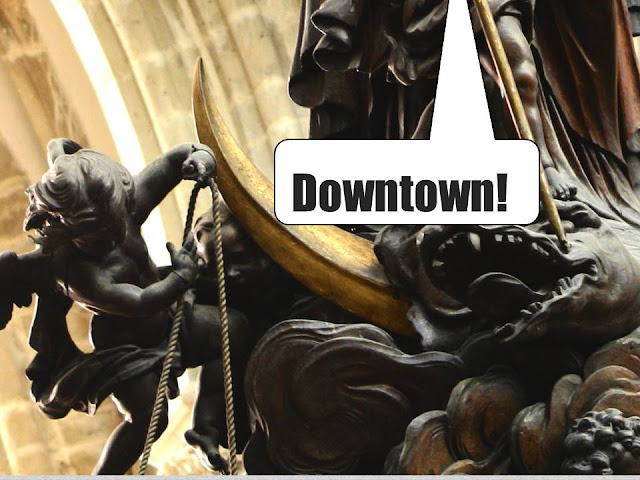 Well, Laurence, I have laughed at and bemoaned all of your musical numbers. Your feast day celebration number actually made my cringe. More than once. I know this news is real. Intellectually. But the photos with the song made it more vivid than my jaded sensitivities were able to handle for the moment. I flinched with each new photo.
Actually, I guess that makes me think this should be a video for aspirants to the seminaries, although we'd have less students even than currently.

Love the video as cringe worthy as it is! How in God's name are we going to clean this up?....or.....maybe we're not.....God Almighty is going to take over completely.....stay in the state of grace!

Your videos are tremendous, and they give us a much needed feeling of satisfaction. These men should not be sacred cows, and the day is long past when they deserved any respect. In fact, these men have counted on that respect and have betrayed us with it. This video is sad, it has blatant truths in it. We must face the truth, this is our church under the heel of Satan. Until God rights it once again, this is our reality.

I miss your frequent posts Bones. Thanks for taking the time from your busy life to do so. God bless.

Agree with Kathleen, it's sad but true, welcome back, Laurence, it's always a pleasure reading and listening your posts.

This is almost too funny and too agonisingly painful ... at least for a Sunday night in Advent.

Pet Clark recorded Tony Hatch's song in 1964.
As Philip Larkin put it, sexual intercourse began in Nineteen Sixty Three, between the end of the Chatterley ban and the first Beatles' LP.

Sinatra recorded Downtown on his 1966 album, Strangers in the Night.
Even Old Blue Eyes, friend of the Mob, would by the shocked by the blatant evil and squalor of the Catholic Church in America today.

About the same time as the Strangers in the Night LP, the great jazz saxophonist John Coltrane was finding it difficult to pay the rent on his modest Harlem apartment.
Coltrane's mother told the press: 'I don't think John is going to live much longer because he has said he has seen God. Nobody can see God and live.'

Coltrane was dead a year or two later.
Charlie Mingus was demanding a Congressional inquiry into why so many of America's jazz artists were dying prematurely and in dire poverty.
One hundred years from now, said Mingus, people will ask why these men of immense genius could not make a living in the United States.

Those corrupt American bishops and cardinals will enjoy the best health care in the world.
To the very end they will tell us how much they love the poor man Jesus.

No wonder the unbelieving world laughs at us.