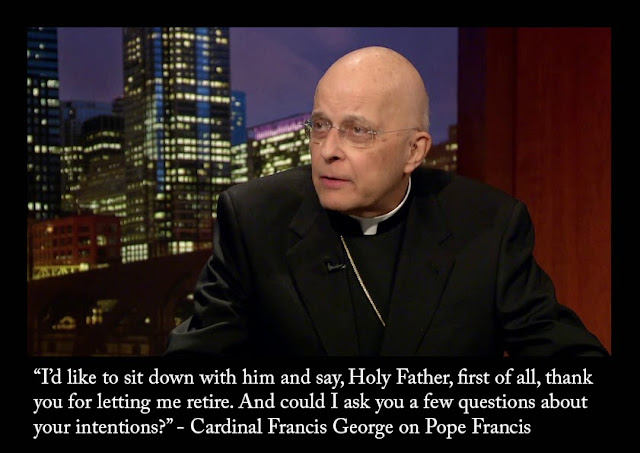 If a distinguished Cardinal is puzzled at Pope Francis' pronouncements what hope is there for us pew sitters to understand him? The few mini sermons I have read, admittedly only in English translations, seem so disjointed. I would be curious to know whether he is equally unintelligible to Spanish speakers?

My advice: Check out Fr Z.http://wdtprs.com/blog/2014/11/francis-he-puzzles-me-sometimes/

I see Fr Z admits to being puzzled so no hope for us to understand then!

Fr. Z: The Pope puzzles you only "sometimes"? Hmmm.

"When I have asked Argentinians about Francis, I have been told that they often express themselves with hyperbole. I don’t know how much stock to put in that generalization, but… hey…."

This is Fr Zed's observation and I think he's really on to something there!

Fr Z used to try to read Francis through Benedict but he threw a brick through that idea.

Look, don't expect Fr Z to write too frankly about The B o R for if he did, he'd see his revenue plummet and in making that observation, M.J. is not trying to claim that Fr Z is primarily interested in money for it is obvious he has written many wonderful defenses of the Faith but he does know on which side is Acton Institute Calvinistic toast is buttered.

If Cardinal George doesn't know by now what the BoR's plans are without sitting down with him and asking, then he needs help. He could sit down with me, I could tell him and it ain't good.

He doesn't confuse me one bit, he was elected to be the anti-Benedict XVI, and I stand by it.