Whatever happened to the Fourth Estate? 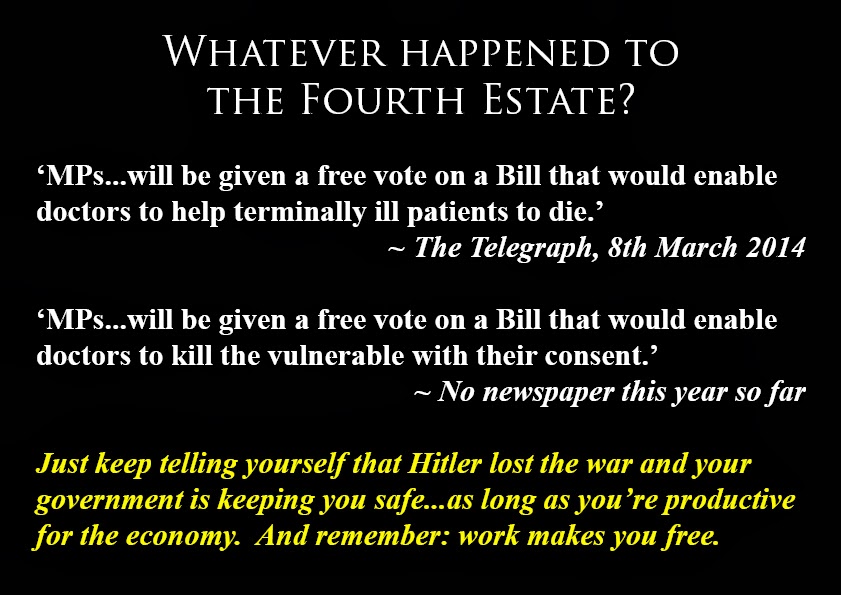 We have long known our Government is corrupt, but what has happened to the British press?

Read it and weep. Weep and pray. When you think about it, Hitler, looking back, of course, was a 'good egg', because he helped so many vulnerable people to die. That would make for an interesting if surprising revision of the schools curriculum. I mean, why have an International Day in remembrance of the Holocaust, when you can live the experience yourself on the NHS? 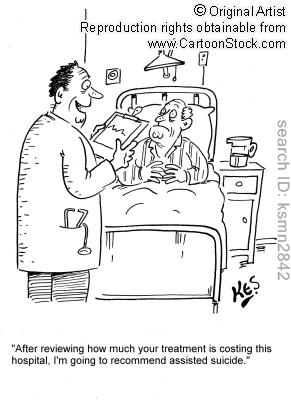 During Lent we are encouraged to think of our mortality and the simple truth that all NHS and private hospital patients are terminally ill. We will all die of something at some point. Hopefully, that will not be by wilful neglect or wilful murder at the hands of a doctor. Someone tell me again why many Ukranians want to be a part of the EU? Don't tell me...they want our 'freedoms'?

Would someone kindly tell the pro-Western Ukranians that in joining the EU 'model' of nation, they are guaranteed a One Party State endorsing the murder of its own citizens at any time from the womb to the tomb, depending on your productivity, with no credible political opposition, a co-operative Press and zero resistance from the populace? Remind you of anywhere?

Assuming its 'conversion' is not cosmetic only, if 'Holy Russia' invaded the UK tomorrow, we may not have much 'democracy' but at least we'd have Christian laws and beautiful Liturgy. I note that Russia never opted for 'gays and women' in the military. Okay, so as we prepare for WWIII, exactly whose bright idea was that? Be afraid, Vladimir, be very afraid!


What with the UK killing its own citizens by the truckload every day through abortion and state killing of the infirm on the way, why fear Russia when our Government declared war on the UK years ago. I'm sure its all part of the Orthodox Church's plan to take over the World...

Don't get any funny ideas about violently overthrowing your legitimate Government, mind. There are things you can do in the Ukraine that are simply not cricket in the UK (unless, which it doesn't, it fits into your Government's strategic objectives for a New American Century...).

Weeping with you. Poor Britain, once the envy of many European states for so many thing...is no longer GREAT ....but where is safe now? Which western country is safe now for traditional family and the natural law?....Italy, short of Divine intervention, is about to fall...and I say ....what then? Italy is the heart of western civilsation...

Thank you for saying what our spiritual and moral leaders ought to be saying. And please give your support as a fellow Catholic blogger to Deacon Nick Donnelly, who needs the support of traditional Catholics in the new Media.

The European Union is Moloch and I marvel at those Ukrainians who remain blind to what has happened in other EU countries; i.e. seizure of private savings accounts of citizens, unelected officials appointed to run various national governments (Greece, Italy), nullification of votes in national referenda (remember Ireland first rejected the EU treaty), propagation of a virulent anti-Christian, pro-abortion, pro-gay agenda, etc. etc.
Mark me. The EU is at best a grandiose Pyramid Scheme which must keep enrolling ever newer members in order for those at the top of this Pyramid Scheme of Nations to gorge on the misery and blood oozing up from the bottom.

Incredible stuff! This is not conspiracy but the work of someone who pull the strings in a Machiavellian framework: The Hilderbergers and Masons. Poor Ucrainians being manipulated by the West who has promised neo-liberal loans and poverty. Do you know when Jesus is coming back? Soon I hope this planet needs a good Spring Cleaning REVOLUTION!