According to Protect the Pope, Tina Beattie has left a comment on The Tablet's blog post by Elena Curti on the Survey in preparation for the Synod. It really is quite shocking.

'Those of us who tried to answer the questionnaire honestly and in a way that might be helpful to the synod on the family are misrepresented by Edmund Adamus’s ‘reflection’.

Like most other Catholics I know, I respect the Church’s teaching on marriage and parenthood. I also know from experience that marriage and family life can induce agonies of guilt over our inevitable failures and shortcomings. However, I do not experience guilt over deciding in good conscience to use contraception to limit the number of children we had. I do not feel ashamed of my adult children for cohabiting with partners who have enriched our lives by their friendship. I do not feel compelled to pass negative judgement on the loving relationships of my gay friends. I am glad that some of my divorced Catholic friends have found joy in second marriages, and I want to share the sacraments with them. In other words, I’m like the vast majority of Catholics whose answers to the questionnaire have been made public.

I seek from the Church the formation I know I need most – formation that has to do with love and generosity of spirit, with faithfulness and integrity, with wisdom and discretion, with prayer and discernment. The list is long, but it does not include learning to regard contraception, premarital sex and homosexuality as intrinsically evil, nor does it include regarding divorced and remarried Catholics as people uniquely barred from the forgiveness offered by Christ in the sacraments.'


Pope Francis has, when speaking of the Sacrament of Confession, talked of the Christian 'virtue of shame'. Shame arises from guilt, or a convicted conscience, a sense that all is not well within the soul, a sense that I have sinned. Tina makes a public profession that she feels no guilt or shame over her use of artificial contraception to limit the number of children she and her husband had. Is that because Jesus has washed away her sin in the Sacrament of Penance when she went to confess her use of artificial contraception, or that she feels it is not a matter to bring to the Lord? Does she feel no shame for not passing on the Church's teaching in the area of sexual morality to her children, or explaining it to her friends? The great irony is that because Tina Beattie is a 'practising Catholic' or, at least, a baptised member of the Church, that she presumes to know better than the Church about what is right or wrong, despite that the Church has outlived every empire since its foundation, while Tina has been on the face of the Earth quite a comparatively short while. Did Tina found the Catholic Church on Tina, 2,000 odd years ago? It is almost as if Tina feels that the Church, which for nearly 2,000 years has taught basically the same thing, is her creation, or her instrument, not God's Instrument of Salvation. Is Tina in possession of a Truth that eluded the Saints, Doctors, Fathers of the Church and, who knows, even Christ Himself?

Aside from various Gifts of the Holy Spirit, the list of things that Tina seeks assistance in her 'formation' is apparently long, yet she lists few of them. All she tells us is the things she does not want from her Church, which, conveniently enough, are those teachings that convict her of sin.

Lent is a wonderful season to go to Confession, but how does the Lord Jesus help those who believe, 'in good conscience' that they have no real sin to confess, even after making a public declaration of their sins and how she has 'no regrets'? What Tina is really saying is that she has no sin because those things that the Church condemns by virtue of Her Magisterium, Tina dismisses as unwanted guidance from a Church which offers some kind of vague, new age spiritual wisdom that does not touch, Heaven forfend, on her good, unsullied conscience. We Catholics have hitherto understood that the Church informs our conscience, rather than our conscience informs the Church, but try telling that to Tina.

What does the Church have to offer Tina Beattie, if it is not Salvation from sin and the graces to live a holy, faithful Catholic life that are channelled to us with such gratuity through the Sacraments of the Lord and by prayer? Can the Church and her Lord help someone who has rejected Her Teaching, which is His? Someone like Cardinal Kasper of course, is a dream come true for Tina, because his words can quite easily be passed off as Beattieism. 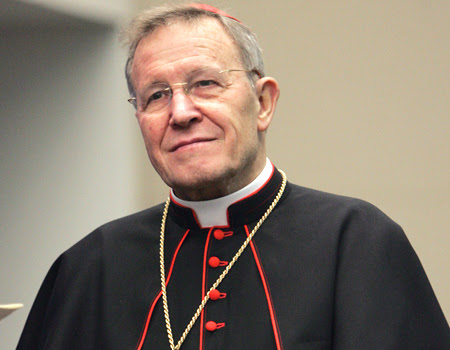 Cardinal Kasper talks as if the Church can bridge the 'abyss' between the Church's teaching and the 'actual situation of people'. In every situation, the Church can offer to the penitent forgiveness, the opportunity to start again and spiritual guidance and advice to live a holy and faithful Catholic life leading to Salvation.

As Catholics we know we are sinners dependent on God's grace, goodness and mercy to be found through prayer and the Sacraments. For the impenitent, however, who do not desire Salvation, you can build a bridge across the abyss, but if they really want the Abyss, they want the Abyss. You can take a horse to water, the water of Salvation, but you cannot make it drink. At some point, those who govern the Church might think to mention that there are eternal consequences if we reject the Church's Teaching and believe and do our own thing.

Say a prayer for Tina that she will seek the 'formation' rooted in Truth that God can offer through His Church. Frightening, isn't it? Such women as Tina are in teaching positions, 'Catholic' magazines and on BBC Radio from time to time, being introduced as 'Catholics'.

'Like most other Catholics I know, I respect the Church’s teaching on marriage and parenthood.'


Tina, if you don't as a Catholic agree with the Church's teaching on marriage and parenthood and everything connected with them, then you don't respect it as a Catholic. You 'respect' it in that way atheists do...

"Well, you Catholics are entitled to your beliefs, fair enough, but I think you are crackers."

TB said: "Those of us who tried to answer the questionnaire honestly and in a way that might be helpful to the synod on the family are misrepresented..."

oh, dear. I answered honestly without any anticipated misrepresentation.

The Catholic Church appears to have gone from the rock solid pontificates of John Paul and Benedict to the uncertain and vague pontificate of Francis.

I was drawn to the Catholic Church by John Paul II initially along with the crystal clear beautiful counter-cultural writings of Joseph Ratzinger. It was wonderful to see him elected as Pope and to live in the midst of his pontificate.

I have been reflecting in the last while that if Francis had been Pope over the past few years, I probably would not have been drawn so quickly to the Church.

What I find difficult to cope with are his vague comments (which we have to try and explain away) and the way in which the world now seems to think that the Church is about to capitulate to the spirit of the world ie. every crazy liberal agenda.

I'm sad to say this but I do think Francis is out of his depth.

As an aside, I cannot understand how Francis did not denounce the decision of Belgium to legalise child euthanasia. All we have from the See of Peter is silence.

I think here of these words of Bishop Melchior Cano which I think were quoted by George Weigel at the beginning of his magisterial biography of John Paul II:

"Peter has no need of our lies or flattery. Those who blindly and indiscriminately defend every decision of the Supreme Pontiff are the very ones who do most to undermine the authority of the Holy See—they destroy instead of strengthening its foundations"

European Catholic, unfortunately the relevant authorities in the Church would seem to be speechless too!

Surely Tina Beattie provided the kinds of answers the questionnaire was seeking to elicit.

The game plan is to use the dissent revealed by the survey to do an 'end run' round Catholic doctrine, is it not?

The Modernists are the masters now.

The Synod on the Family has the makings of a disaster of epic proportions.

Bishop Francis has already launched a 'civil unions' trial balloon. This is hardly surprising given that, as a cardinal in Argentina, he supported 'civil unions' as a 'compromise' on "gay marriage".

So much for "a sin that cries out to Heaven for vengeance."

One begins to wonder whether there is any Culture of Life teaching of the Church which the Bishop of Rome is prepared to defend vigorously and consistently in the public square.

Everyone seems to be sorting themselves out quite nicely now.
Very orderly.
Sheep to the right? Thank you very much.
Goats to the left? Thank you.
You'll only have to wait a tick I think.

That's how it is. And of course, it's a most grave sin to cooperate with such evil "laws" as civil unions legislation that gives public recognition to, and confers public status on, objectively evil relations. The sin is so much the greater if one actually gives support to such legislation, and if one is a priest or bishop ... !! I am continually stunned by the mass denial of what is being done by our bishops, priests, and the Pope. It's like being the little boy in the crowd cheering the parading naked Emperor.

Tina's up to her old tricks again and of course her rejection of Catholic beliefs goes way beyond Humanae Vitae. My gut instinct is that it includes papal infallibility, the Magisterium, the sources of revelation and the mass. I've always thought she comes across as somebody who was quite happy to be badly catechised when she came into the Church.