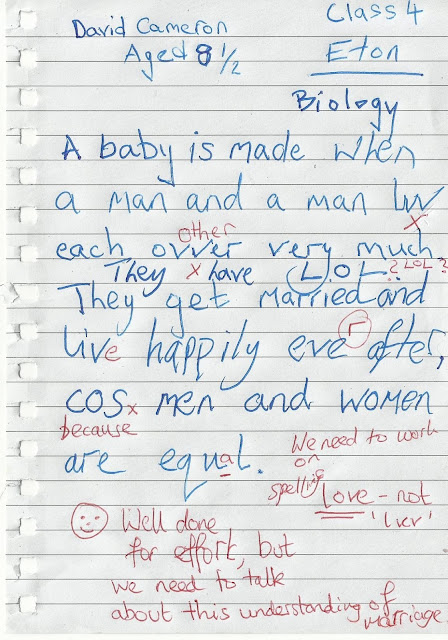 School biology work by a young David Cameron has surfaced which suggests that, even at a tender age, the boy who would go on to become Prime Minister had an under-developed understanding of the institution of marriage that caused teachers concern. The revelation of his Eton biology work, set to rock the campaign for 'same-sex marriage', has raised eyebrows in Westminster.

Sadly there could be some truth in it thoughg.

Oh, Lawrence! Not when I am on my second cup of coffee. You now owe me a computer screen!

LOL! (In the non-Cameronian sense.)

Your incisiveness makes for great wit. You should be paid to write jokes in newspapers. Of course, you'd have to adopt a certain stupid kind of ideology to be used by the typical mainstream paper. But Catholic papers could do with a slot for this kind of very instructive satirical commentary.