Voris Speaking in London in August 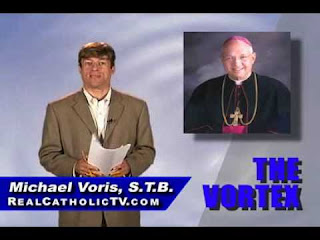 I've just been notified of a talk being given by one Michael Voris of Vortex fame in London. You can join the Facebook group here.

The talk will be entitled 'Living the Faith Radically' and it will take place on Sunday 24th August 2011 at Regent Hall, 275 Oxford Street, London W1C 2DJ.

Paul Smeaton of Juventutem has created the Facebook page. Tickets are £5 which is a snip. I'd like to go and buy that man a pint. He works very hard for Holy Mother Church. He deserves a warm welcome just because he's one of those 'prophetic Catholic voices' that doesn't take prisoners and doesn't mince words. He teaches the Faith in season and out of season, much to the irritation of many.

Presumably, Mr Voris has been warned to expect incoming torpedoes, but I expect he is getting used to that kind of thing.

I hope the Methodists don't own regent Hall ...

And those who have damaged the Church more than any you list!

Obituary
"While many were drawn back to the faith by the generosity and sympathy he showed to those in difficulties from all walks of life, he had a particular mission to journalists."

Guess who?
The answer will be found on BBC1 Tuesday 10.35pm

This might even mean he will be talking in Ireland as well - I have to be there as usual this summer, it's my mother's 90th birthday in August, so will have to miss out on London - gutted!

"Every year he would help organise a children's Christmas party in the crypt .... after Christmas (why do it before when there is so much going on for the children, this could be Santa's last stop, was his thinking). He would always dress up as Santa and bring joy to all the children when they received great generous gifts two weeks after Christmas. He would never shout about this role but it was one he loved most."
Indepedent Catholic News
17 Dec 2010

Put not your trust in men, only in the Lord and His Blessed Mother.

Michael Voris is great, and I'm hoping to make it as I'd love to hear him speak... BUT ... the only problem is his hair. Am I being really superficial here, or is it a really REALLY bad syrup & figs? I find it horribly distracting, and it's so bad that there are some people to whom I'd love to send episodes of The Vortex to, but can't, as I know they'd focus on The Hair, and not what he's saying... Please tell me that I'm now alone in this!

(: Don't let it put you off if you like him. He needs some tips from Elton John, certainly a less conspicuous wig.
A touchy subject for men. I'm suprised Bones let you through. Bet he wouldn't have done if HE had been bald. lol

I think he's got lovely hair. It's so thick and straight and - I don't know - orthodox somehow.

Laurence, you may wish to check the date of this again as according to my diary the 24th August is not a Sunday.

So sorry you did not get the job you went for.

Annie Elizabeth - I agree with you!

When he exposes the iniquities of some Catholic professionals and the unacceptable "tone" of much blogging I can overlook that he is follicly challenged.
SEE Voris on:

@Ann-Marie and Annie-Elizabeth: dear ladies, you can't be serious, judging a man's message by the look of his hair (with which, btw, there is nothing wrong). And to recommend he takes cues from...Elton John? You do know E.J. used to be bald, so what are you suggesting? Changing the way one's hair looks surely is what makes a person a more powerful and trustworthy voice, especially in the matters of Faith.

Voris's hair is all his own. I doubt he puts much thought into it (and frankly, I would wonder about men who do)...