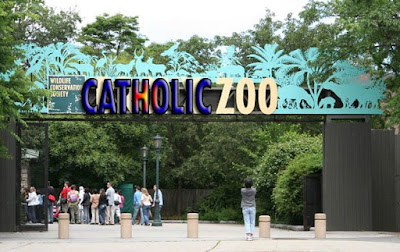 ...and the World's first 'Catholic Zoo' has been opened to the public.

The Darwinian ideology espoused by Richard Dawkins has been embraced by nearly all of society, including the Government, who have made "Human Species Act (2019) enacted by an Even Newer Labour Government'.

In a shining new era of human progress, the rapid development of the doctrines of atheism is seen as evidence that human beings have 'evolved' to refuse belief in a Creator and Redeemer.

Anglicanism has died out, for want of a firm foundation and leadership and the majority of this species are able to re-integrate into society and renounce their irrational thought with seemingly little struggle. Those who could not join the Catholic Faith, en masse, which has been banned, seen as a threat to the new order of enlightened thought, but, then, what do you do with the 'old order', swept away by the great leap forward taken by humanity?

Well, many are killed, imprisoned and all formerly protected human rights, for the born, at least, have been removed, but the remnants of the Catholic Faith are seen as a national treasure of ages past, a quirky slideshow of a confused time in human history, remnants of a civilisation broken and derided by the forces of nature, a species 'unfit' for the human purpose, but an object of scientific study and in the name of conservation, some Catholics are preserved, lest the entire sub-species become utterly extinct.

Richard Dawkins, a frail man bound to an electric wheelchair, and Professor Steve Jones, now the World's most famous and eminent geneticist, accompany some of the first men, women and children around the newly opened 'Catholic Zoo' and give them a dazzling tour of the conservation area for the odd species of strange, exotic creatures known as Catholics, kept confined in cages, who are bred selectively in the name of science, conservation, national heritage and the study of the human species in what has become the International Human Genome Project, so that the 'Catholic gene' can be isolated and eradicated from civilised society, while the Dawkins & Jones Institute of Genetics run tests on their embryoes. We join them in the first area of the conservation park named, 'Priest's Paradise'...

Mr Dawkins makes an introductory speech to the tour group.

"Welcome, ladies and gentleman, to our first Catholic Zoo. It has taken quite a while to get to this stage in history when the scourge of religion, misty-eyed optimism in a bearded sky-fairy and the destruction of an evil creed of irrational thought has finally come to fruition! What an exciting day Professor Steve Jones and I have in store for you! Let me first introduce to you, ladies and gentleman, to the first of our exciting tours and here we are, surrounded by a beguilling species, an anomoly in terms of evolution, a terrifying blip in terms of the genetic code. Ladies and gentleman, I give you...the Priests!"

A black curtain is drawn up steadily from the cage revealing a small band of men, emaciated, dejected, some standing, some kneeling, some sleeping. A small placard is displayed on the bottom left of the large cage, simply saying, 'Priest [Latin Name: Sacerdos'].

The crowd gasp in amazement at the species, dressed in black, still with a white collar, black shoes, stained with their excrement and urine, with dirty, unshaven faces, marked by fatigue, hunger, depression and abject fear...


"What is that one doing? He's mumbling to himself!" says a woman.
"Ah", says Mr Dawkins, that one is not mumbling to himself. He's praying!"
"Fascinating!" replies the woman. "Praying? What is that?"
"Well, this species, as we know, ladies and gentleman, have not evolved out of their repulsive, vile belief in God. We allow them to keep up some rituals of their ancient mythologies for the entertainment of the visitors to this conservation areas. This Priest is saying his prayers for Matins'.
"Oh, my! My I talk with him?"
"Certainly not!" replies Mr Dawkins. "No, he will only tell you frightening stories about a vengeful Earth-flooding God. Look, but don't touch, listen but don't ask."
"I see," she says, "How strange and wonderful!"

A little boy speaks up. He's been crying.
"Mummy, mummy, I want to go home. I feel sorry for them," he whimpers.
Professor Steve Jones turns on the boy. "If you knew what this species did to small children like you, then you would not feel sorry for them! Don't! These men are part of a species that did terrible things to children! They did unspeakable things! They tortured them and covered up the torturers. They made small children do things against their will just to gratify themselves! The whole species! They were all at it, committing terrible crimes against children like you!"
"Did they?" The little boy stops crying and becomes angry and upon hearing this spits on one of the Priests.
The Priest wipes the spit off his face and says, "My child! O my child! Jesus and Mary love you! Do not let yourself be taken in by this - aaaaarrrrgh!"
Mr Dawkins uses an long-arm taser to silence the Priest who is left writhing on the floor. "Don't worry, the Government supplied us with these to keep them under control. You're in no danger, my boy, thanks to this zoo. They can no longer hurt you, but we need them to investigate the mysteries of the human genome."
"Do they breed? How?" asks a man.
"Ah, no," replies Mr Dawkins, "These do not, obviously. I'll take you to the Laity cages later. We allow them to breed, one child every five years must be produced so that the species may continue but under strict control."
"Did they abuse children as well?" asks the man.
"No, not physically, but they supported the disgusting Priests and their international conspiracy to molest poor children. Clearly it was a genetic trait, hence they, too, are here. They also abused their children with their evil indoctrination of the Catholic Faith! The Laity are terrible! They must be kept in check! Even the Bishops ended up agreeing with us on that one!"
"Bishops?!" asks the man..."Where are the Bishop's cages?!"
"Ah," replies Mr Dawkins, "In the end, the Bishops seemed to integrate back into civilised society rather well following the new laws. Not one is in here. They are all free."

A woman in the tour group, unbeknown to the tour guides reaches inside her handbag and pulls out a piece of bread, a white handerchief and a small vial of wine, out of sight of the rest of the group. A loud siren emanates around the zoo and Mr Dawkins turns on the woman having seen her.

"Thank God for CCTV!" he cries, "What is this?! It looks like the species has not yet died out on the outside World!"
He picks up his mobile phone. "Hello, yes, get me security down here right this instant! We've found another one and she's come straight to us! Talk about a honey trap!"
Security guards restrain the woman and pull her to the ground. Dawkins picks up the bread and the wine and shows it to the Priests.
"Were you looking for this? Ha-ha! No chance!" He turns to the tour group. "I will leave you for now in the capable hands of Professor Jones who will continue the tour without me. Excuse me, while I deal with this woman personally."
He turns to the security men still restraining her, looks at the guards and says, "Take this woman away to the laity cages, but first, take her to the laboratory and get her eggs!"
The woman gazes at Dawkins, eyes piercing at him, conveying a mixture of anger and pity. She looks at the Priests and shouts...

"O holy Priests! You who have not abandoned Christ! Persevere in the Faith until the end since the Victory is His and so shall it be yours! May His Passion and the prayers of Our Lady of the Seven Dolours and all the Holy Martyrs strengthen you to accept all that you now suffer and will suffer at the hands of the wicked, as you offer yourselves as a holy oblation to God! Be brave, Holy Priests, for there are still some of us on the outside World praying for you! They have not eradicated us all!"

The Priests weep tears of joy and one replies, "Oh, blessed child of God! I would not have advised you to come here, but God will crown you for your efforts and for your faith and you will who will share in the sufferings of the Church Militant on Earth will also share in the Glory of the Church Triumphant in Heaven! Rejoice dear sister in Christ, for your name is written in Heaven! May Christ embolden you for what is to come! Dominus vobiscum! May God bless - aaaarggggh!"
at September 14, 2010

I don't know what medication or drugs you're on, but they must be strong!

The piece sums up very accurately what Dawkins & Co stand for and what is the logical outcome of their beliefs. Very well-written, Laurence. A prophetic story for our time.