What is Missing from Atheism?

Well, God, obviously, but with Him goes so much that the World needs and craves. Ed West has written a good blog post on the 'other Hitchens', Peter, who seems to attract far less publicity than his brother but for no good reason in particular.

In his new book, The Rage Against God, reviewed by Ed in this week's Catholic Herald, he quotes Peter Hitchens discussing a painting that made him question so many of his prejudices against Christianity and which had him in awe of an artist and his depiction of the Last Judgment and, through the painting, Christ Himself.

Jesus Christ, the Beginning and the End, the Alpha and the Omega, sits enthroned, with His Angels and His Saints in attendance, judging the World, blessing the Blessed and damning the Damned. The image is salutary stuff for those who believe and, in the case of Peter Hitchens and doubtless others, also those who do not.

Ed West surmises that fear, or rather the loss of fear, the kind of holy fear generated in those who view art such as this with the eyes of faith, is what led to the 'brutal condition in Bolshevik Russia'. This is quite true in a sense, because then, as now, lived a generation of men who behaved as if God did not exist.

Popes down the ages have taught just as Pope Benedict XVI does, that without God, man is lost. That is not to say that man is bad, or degenerate, but that man is lost, his ability to choose goodness and reject evil curtailed and moreover his ability to distinguish between good and evil, hampered. Even the great Evangelist, St Paul, bemoaned his own sins and weaknesses in his letters, but what kind of moral blindness can lead a generation of men to enslave others in gulags and murder, so arbitrarily, thousands, millions even, in Nazi Germany or Stalinist Russia?

Are we really so bad a species that only Damascene conversions upon gazing at the Last Judgment, in 'fear and trembling' can save us from ourselves and stop us slaughtering our brothers and sisters and throwing them into mass graves? It must, surely, be a little more complicated than that, since we are, at heart, complex creatures. Oh, how mysterious we can be and indeed are! 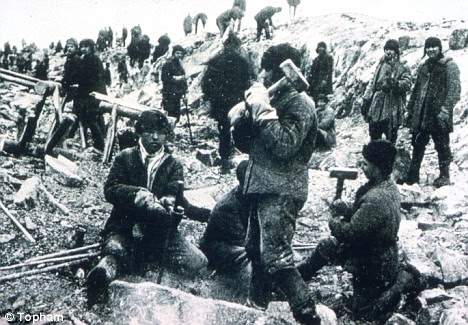 Bolshevik Russia, like so many tyrannical and murderous regimes do, crushed religion, a key foundation stone in any society down the ages, in an attempt to raise man to the glory reserved for God alone.  In so doing, they destroyed not God, Who is Eternal, but the Mystery of Faith. They throttled the Mystery of Faith and with it they throttled their brothers and sisters.

It is almost as if in the absence of a sense of God, Who the Church proclaims to be Love, a vacuum is created in which the 'new and better World' promised by those who champion it, becomes a bloodbath of emnity, strife, division, competing ideologies and murder, as man, divorced from his Creator and left to his own egotistical ideas, bereft of the Mystery of God, searches helplessly for meaning in a cold and brutal World, a World not created, redeemed and guided by Love, but one borne out of utter chaos, whose inhabitants are governed by dread, fear and insecurity alone. For these were men who raged, not against the 'dying of the light', nor perhaps even God, since they had forgotten Him, but against themselves and each other. The Nazi ideology fared no better, reducing man to a mythological ideal grounded in racial purity. People who didn't fit in to the ideal, well, they just didn't fit in at all and we all know what the 'final solution' was.

Throughout even the torturous, bloodthirsty, savage 20th century, the Church continued to proclaim the Beatitudes, continued to proclaim the Gospel, despite the popularity of new ideologies, continued to meditate upon the Mystery of Faith and proclaimed that man had been raised to a new and glorious dignity in the light of the Risen Christ. In Our Lord Jesus Christ, man has hope, a hope that no man can rob from him, not even the pale faced man dressed in black with a big scythe. She bore many martyrs for proclaiming just that, with a host of men and women who bore witness to the dignity of the human person.

In this age, when, once more, again, high profile men and women in positions of power and influence seek to destroy the Mystery of Faith, in order to replace it with an ideology, a 'new atheism', leading to a more 'rational' World, one grounded not in 'superstition', but in 'science', genetics and cold, reductionist logic, what kind of World will, if successful, these new high priests create? A 'new and better World'? Sadly not. A World devoid of hope, a World devoid of prayer, a World devoid of love, a World that behaves as if God did not exist - that, unfortunately, is where this story ends. The 'new atheists', fashionable, popular, persuasive, are not prophets of a new and better World, but prophets of doom. We have been here before and the atheistic 'geneticists' who have flourished in the absence of a strong and united Church will make all the mistakes that the eugenicists made in Nazi Germany.

Meditating on the Last Judgment in fear and trembling may still profit a man nothing if he has no love. For it is not fear of the Last Judgment that primarily motivates the choices of those who believe, but love. It was not fear, for example, that motivated Blessed Teresa of Calcutta, nor money, nor public acclaim, but love, love of the Crucified, love of the Poor in whom she saw the Victim whose death brought her Life. In the Mystery of God, in the Mystery of Love and in loving the sick and dying, Blessed Teresa of Calcutta's soul ascended to God.

Those venerated by the Church as Saints and Martyrs and Blesseds, those known to us, entered deeply into the great Mystery of God, the Mysterium Fidei, the Mystery of Faith. Those who the Church has raised to the Altar did not know everything. Their lives were often full not of certainty, or a show of power and strength, but, more often than not, were marked with joy, love, sorrow, doubt, failure, weakness, suffering and fatigue, which entered their lives deeply. These men and women, however, are crowned and revealed by God to His Church. They saw the Mystery of God in their brothers and sisters, all of them. They lived for God, they thirsted for God, they yearned for God, they hungered for God and they allowed the Mystery of Faith to penetrate their lives, their minds and their hearts. They did not act out of fear of the Last Judgment, but out of love for the One with the power to save souls, heal broken hearts, set free those imprisoned, the One who brings light to those in darkness. They fell in love with a Mystery: the Mystery of Faith.

Say a prayer for Christopher Hitchens, dying of cancer, and all the 'new atheists' who appear to haunt the mainstream media like ghosts from ages past. Peter's brother, it seems, has spent a great deal of his life hating. He hates Pope Benedict XVI. He despised Blessed Teresa of Calcutta and one assumes, Pope John Paul II. It is all too easy for the World to hate God's chosen messengers, since their message is a hard one and their faith is baffling. They can appear contradictory, even mad. Yes, it is easy to hate these, even if they do not return your hatred but show you only love in return. They are only Christians after all. That's what the World expects them to do. It is harder, however, it is O so much harder, to hate the Man who died for the love, of you.