Neil McCormick of The Telegraph has written about Mark Linkous, lead singer and songwriter of Sparklehorse, one of the few original songwriters in this age of terrible music. The singer/songwriter, who had a small but very ardent and loyal fanbase, committed suicide after years of depression, shooting himself in the heart in an alley in Knoxville, aged 47. The world has lost a tender musician out of whose sufferings came much beautiful music. Pray for the eternal rest of his soul. 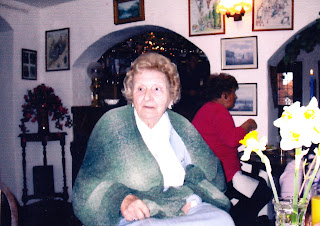 All round, it has been a sad time. I lost my Godmother, Joan Sparks. She was a neighbour when I was growing up in Letchworth and was quite literally one of my favourite people growing up. She was very kind and I always remember that.

She was widowed many years ago but even death could not end her devotion to her beloved husband. On one of the very few occasions I went to see her in Norfolk, before her move to a nursing home in Swanage, a town she loved, I saw a massive photograph portrait of him in her room. She said to me, "Don't listen to what other people tell you to do with your life, follow your heart and do what you want to do."

That kind advise has always stood me in good stead, as I am still largely unemployed. She and her son, Peter, took my family sailing once from Southampton to the Isle of Wight when I was young. Apparently we came very close to capsizing in stormy seas and because I was little the whole family told me everything was under control even though the boat was at an angle of 45 degrees for most of the journey. Pray for her soul. May she rest in peace. 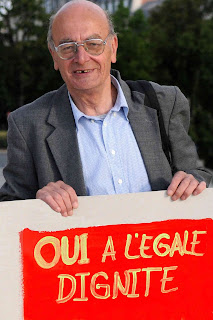 Pictured right is Henri Bossan, who I met at ATD Fourth World in London, one of many inspiring men and women who devote their lives to campaigning against poverty in the organisation founded by a French Catholic priest named Fr Joseph Wresinski.

A joyful man, full of warmth and compassion for the poor, he will be sadly missed by the charitable organisation that raises awareness of the scourge of poverty across the world. I don't know the full story of his life, barely anything, but I know that he met the founder of ATD Fourth World and was so inspired by his witness to the Gospel that he left everything to join him in Paris among the slums of the poor of post-war France, but his time in England was spent living in a poor and deprived area of Hull, living in solidarity with families in poverty and reaching out to them. A true hero, an inspiration to others, he committed himself to upholding the dignity of the human person and the human rights of those condemned to live in poverty. May he rest in peace. 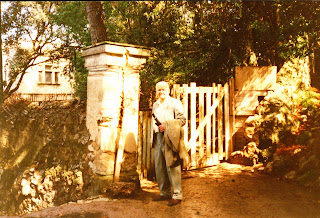 Last, but by no means least, pray for Desmond Gregory who died recently. A kind and gentle soul, he was a historian and teacher. Fr Ray Blake paid a wonderful testimony to him on his blog.

Desmond employed me in the last six months of his life to do odd chores for him. After his very dignified and beautiful Requiem Mass, many paid tribute to his achievements, his travelling exploits and successes in the World, as well as his warmth and joy in human company.

I knew him only for the last six months of his life, so the Desmond Gregory I knew was Desmond the elderly, frail, weak but brave man, courageous in the face of grave suffering and death, patient and still kind and thoughtful of others, showing little sign of bitterness at the pains he suffered in his old age. He died fortified by the Sacraments of Holy Mother Church, the Church to which he converted. Fr Ray and I would visit him with the Blessed Sacrament so that he may receive his Lord and God in Holy Communion. His last few weeks were agonising for him and painful for those who cared for him. He was able to eat only a small amount and was confined to his hospital bed. He was always so happy to receive visitors and friends in whom he took great joy. His nephew said I could have a picture of him and I found this one in his drawer, which is comforting as it looks like he's just about to go into his house in Heaven. May he rest in peace.
at July 15, 2010

''Apparently we came very close to capsizing in stormy seas and because I was little the whole family told me everything was under control even though the boat was at an angle of 45 degrees for most of the journey. Pray for her soul. May she rest in peace.''

I wonder if it was this trauma (obviously subliminated since you cannot remember the event) which caused you to be gay? Have you thought about sexual reorientation therapy (albeit totally discredited and lacking in any scientific validity)?

Have you thought about personality reorientation therapy?

Didn't that boat thing happen in 'The Truman Show'? They used it as a smoke-screen to induce the main character to believe in a spectacularly staged lie. Bit like the Church!

But how can you be so sure?

It is the devil who is the 'father of lies'.

There is no falsehood in Our Lord Jesus Christ.