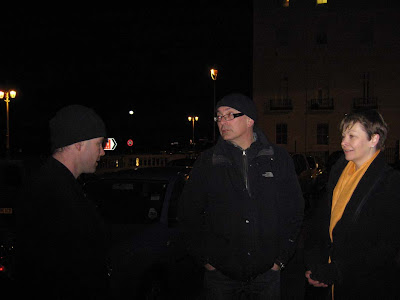 The greatest tragedy that has befallen democracy is politics. The primary aim of political parties is to be elected. The secondary aim of political parties is to make a difference to the people whom they represent. Every town, every city, every ward within every town and city has an elected MP. Yet, there are so many people who feel distant or even excluded from the political process. At some point, perhaps it took place a long time ago, a chasm emerged between elected representatives and the people they represent, their constituency. The sense of despair at the political process was, this year, heightened by the MPs expenses scandal.

However, the most excluded people of all from the political process are those whose votes are seldom sought, those who perhaps wouldn't even think of voting, those who feel they do not even have a voice. One of these groups, without a doubt, is the very poor, excluded and marginalised from society. One of these groups is the homeless and in Brighton the Soup Run serves many of them. 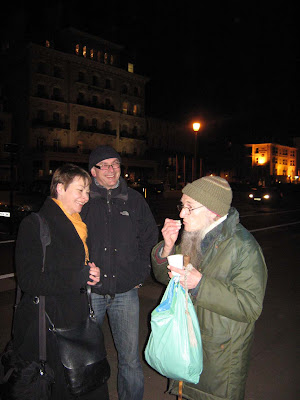 The homeless, I am sure, do not want special treatment, but merely to be recognised as valued human beings in a truly inclusive society in which every human being is entitled to and given, respect. They seldom receive it, of course, but it is the very poorest in society who have the most to tell society and those who represent communities either in Parliament or in Brussels, about what kind of society we live in.

If a truly just society is to be built, it must be built from the bottom up. That is how we build a house and that is how we should build a just society on firm foundations. If those who are at the bottom of society, the poorest, the homeless, the very vulnerable are not heard then those at the top of society, the politicians, who are called to serve the people, rather than master them, will be unable to enact just laws or represent a whole community.

Caroline Lucas, Green MEP and Green candidate for Brighton Pavillion tonight met with the homeless served by St Mary Magdalen Soup Run. For that willingness to meet the homeless at the Peace Statue, she should be commended for being willing to listen and learn from the poorest in society. The homeless are not necessarily 'vote winners' since they are so often condemned by their poverty, blamed by society, ignored by society, or even persecuted by society. Caroline Lucas MEP, should be commended for listening and learning about all the issues which the homeless face, day in, day out, week in, week out, about how the Council treat them, about how the 'local connection' policy impedes their ability to be housed, about how they are treated by Government agencies who do not recognise their dignity as human beings. If human rights are to be truly respected for all of society, if Brighton is to be a truly 'inclusive' society then Brighton must include the very poor and the homeless. These rights which are inviolable must be respected for the poorest in society.

Caroline Lucas said she would like to come back and meet the homeless again very soon.
at March 04, 2010

As it stands there is nobody praying outside abortion centre in Brighton.

I was wondering about how to convince politicians of the right to life of the unborn.

Perhaps we could turn up at a clinic and we could say. "Hello. Can you show us the contents of your bins outside. We'll take pictures."

So.... The Vatican have been using donations to procure male prostitutes. Talk about your radical gay agendas! Boo, clean out the corrupted officials

Sounds like it hasn't been 'the Vatican' itself, but a lay man. Lay man in gay shock.

Regarding the story of the service veterans on the seafront. I know someone was asking for an update.

They are back outside the club. Roger is ex-paras, was at Goose Green. He said he is peeing blood and was at the hospital yesterday. His mate Terry is not ex-army. His other mate Perry was beaten up by the police yesterday. They come to the soup run so you should be able to make contact. Roger is 63 and quite heavily built, wears a dark grey overcoat.