I've been paying off £30 a week on a 12-string guitar which I found at a local guitar shop for £99 and she is very nearly mine. That guitar will join my other plug-in acoustic and I found a bass guitar for about a tenner in a local charity shop. I don't think I can fit drums in the flat, but I have egg shaker and tambourine. I have a few friends who might like to do some busking come summer, so I hope we can practise over the next few months before taking Brighton by storm and simultaneously give those pan-pipe players some competition in Churchill Square.

If we get good we'll record and maybe sell songs (mostly covers no doubt, though a friend and I have recently penned a sure hit entitled 'Where's My Horse?') in the town centre and see if we can avoid ASBOs all round. Oh, and hopefully buskers and all citizens including homeless people and drunk people on Saturday nights this year will manage to avoid having a few hundred volts from these delightful new 'Super Tasers' ready to roll out to the UK Police Force courtesy of the Home Office. Amnesty International claim 334 people in the US died between 2001 and 2008 from the original Taser stun gun which could only be used when up close and personal. Interestingly politicians who support the use of these weapons don't even bother dressing them up as an anti-terrorism measure. They're for us, UK citizens, the terrifying enemies of the State that we are. 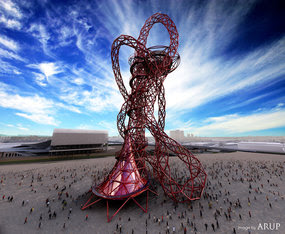 Meanwhile, if you want yet more proof that the United Kingdom is going to Hell in a handbasket, check out this new 'Olympic sculpture', the ArcelorMittal Orbit, which does indeed look as if it has been donated by the Devil himself as a gift to the Greater London Authority for 2012.
at March 31, 2010

Electronic drum pads are more suitable for a flat: can be played silently (you hear them through headphones) so kind to neighbours, and don't take up the space required for a proper kit. And when you go busking, can be put through an amp. Keep scouring the 2nd hand shops...